The days of deciphering fuzzy, slightly tilted letters are over. Now you have to ask yourself questions like, “Is wine food?”

Those behind our cyber security are making CAPTCHAs, the quick Internet tests you complete to prove you’re human, more advanced and err, creative. They historically look like this, but as machines become more advanced, the classic CAPTCHAs just aren’t cutting it anymore.

“A fuzzy string of numbers is hard for people, but machines are good at it,” Google’s Jason Freidenfelds told the Observer recently.

The distorted number and letter method is still used widely across the web, but some sites are now dipping into new ways at testing if a user is a human or something malicious. While logging in to pay my cable bill the other day, I encountered a CAPTCHA instructing me to click all of the following images that contain salad.

I played around for a little bit, and uncovered more of the same tests for soup and pasta. Another just said to select the food—It pictured four plates of unidentifiable food, some glass stemware, an archway, a cup, and what may be a spaceship?

Admittedly, I found these CAPTCHAs a little tougher to decipher. The images were small and blurry. In a few, it’s difficult to tell if that little cup of something on the side contains soup or if that’s pasta on the plate or something else entirely. On the test that said to identify the images containing food, I could just barely tell what was food, but not what the food was. It also wasn’t clear if the cup contained any liquid, and if it did, if that photo counted as food in this exercise.

I was able to successfully log into my Optimum account, but it’s likely a machine wouldn’t have gotten past the test (which is not reminding me that i’m starving and it’s lunch time). Will more sites begin adapting this alternative security method? Possibly.

“There is an arms race when it comes to CAPTCHA where machines are getting better and better at understanding them,” Mr. Freidenfelds said.

We poked his brain about whether advancements in artificial intelligence and machine learning will enable machines—and therefore humans with malicious intentions—to successfully complete CAPTCHAs. He assured us that they’re getting better at figuring out machines’ weaknesses and that “the good guys tend to be ahead of the game.” He explained that the “good guys” are the ones who understand the systems and the hackers are the ones exploiting them. By the time hackers figure out a way to breach, the good guys are on to the next, more secure technology. 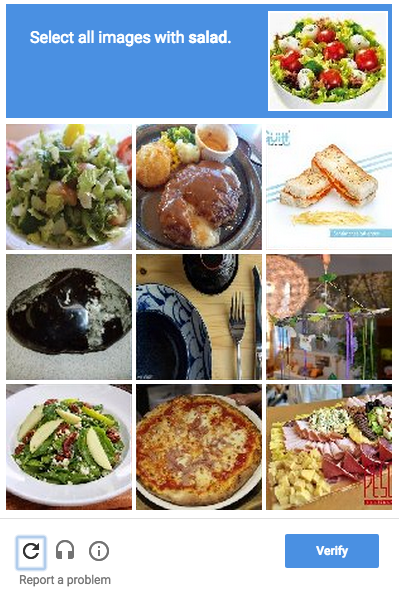