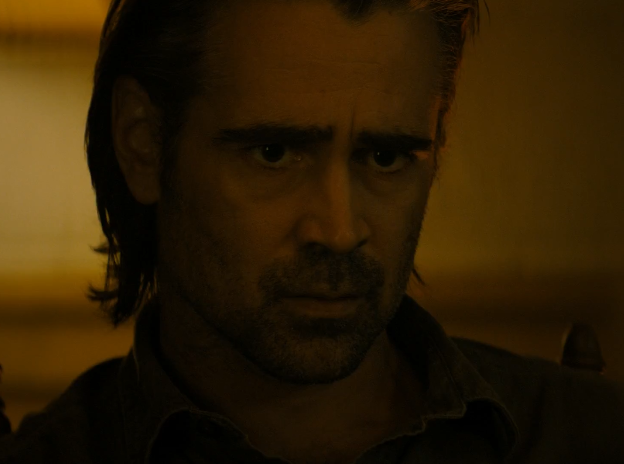 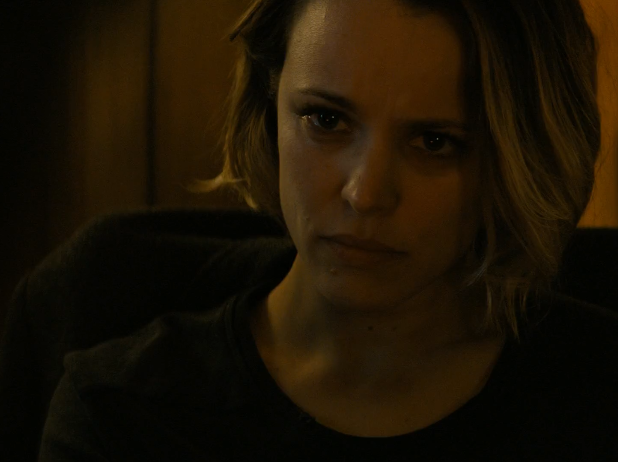 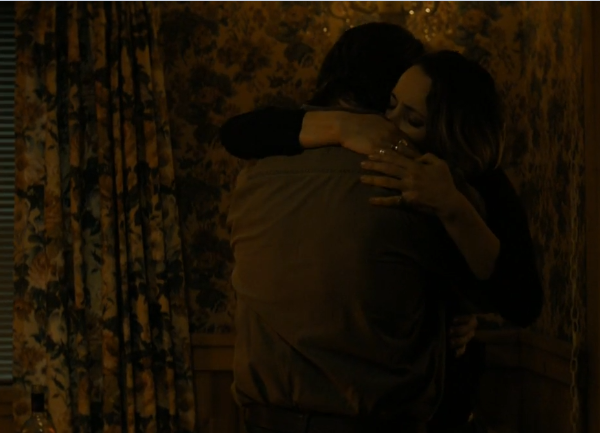 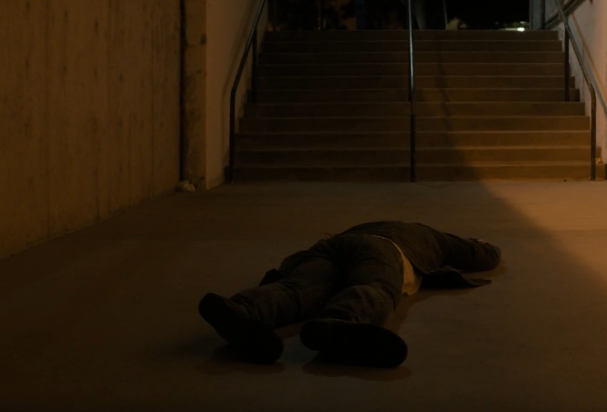 The funny thing about True Detective, besides everything, is that when it’s at its absolute worst you can still see exactly what Pizzolatto and company were going for. Take, for example, Ani and Ray sitting in a motel room and staring at each other across the table before moving into the other room for the ugliest sex between attractive people I’ve ever seen. The vibe of this scene, this whole episode even, was supposed to be these lost, world weary souls feeling the world come in around them, enemies on all sides, and realizing that the only people they have in this sick, lonely world is each other—one last reach for the only human touch they can get. And it almost works for me. Almost.

What are you two cave-people even talking about? They should take any Emmy that True Detective is going to be nominated for and give it to the poor bastard that had to type the close-captioning for this scene.

But hey, at least last week’s descent into the whitest, wrinkliest orgy ever was worth it, right? Uhhhhhhhh, actually no. All those important signatures of important people on all those important documents? Well, those important people were like “lol whatever we’ll just frame two of you for murder and then actually murder the third guy. Corrupt government, bitches.” Because that’s exactly what happened. Both Ani and Ray are wanted fugitives—Ani for slicing up that security guard, Ray for being at the scene of Detective Nightcrawler‘s murder—and Paul is our first big-named casualty, shot down by Lieutenant Burris in a way highly reminiscent of Ray’s bird-head fake-out in episode two.

Well, at least Ani saved that girl, right? Uhhhhhhhhh, actually, well yes, but she really didn’t want to be saved. Which led to the absolute most True Detective exchange that’s ever been True Detective-d.

Ani: Maybe, and this is just a thought, maybe you were put on Earth for more than just fucking.
Vera: Everything is fucking.

Everything is fucking. Oh my god. That is like the Walter White meth of Nic Pizzolatto dialogue. It is just such pure Pizzolatto. If you squint hard enough and immediately move on, you can kind of convince yourself that it “meant something.” Is it even a little true? Is everything fucking? What about, like, apple picking? Is apple picking fucking? I want to compile a list for the producers of this show titled “Things That Are Not Fucking.” Wait, is compiling a list fucking? Am I fucking right now?

But alas, we must come to poor dear Paul. There isn’t much hope for a red room and a Conway Twitty cover for you, is there buddy? You’re just plain old dead. I really want to talk about the lead up to Paul’s death, because unfortunately I laughed. So hard. First some mysterious phone number sends him those wonderfully shot candid photos of him hooking up with his old army buddy. Then it turns out his old army buddy is in on it AND working for Catalyst. Then his army buddy leads him underground to a deep, mysterious tunnel flanked by armed guards, and tension was building until a shadowy figure emerges and it is…this dude. 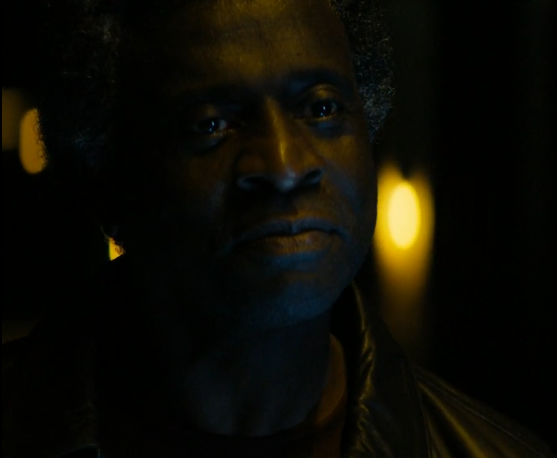 Ugh, I know our detectives finally unearthed the information that Detectives Burris and Dixon were behind the blue diamond murders, and Vinci PD is the most corrupt place on Earth, but it seriously took many moments to realize that this was Holloway, the chief of Vinci PD, and not some new all-powerful character being introduced in the seventh episode. Half my time watching True Detective is already spent flipping through past recaps to remember where I saw that face or heard that name before.

Oh well, if Paul had to go I’m glad he left us with my absolute favorite example of dumb-dumb Paul dialogue. He sends his mother and fiance away to a distant hotel room, and his fiance asks him what they should do. Paul responds: “Room service. Don’t answer the door or the phone if it isn’t me.”

HOW ARE THEY SUPPOSED TO GET THEIR ROOM SERVICE WITHOUT ANSWERING THE DOOR, PAUL?

But seriously, RIP Paul. Poor Taylor Kitsch, although probably the weakest of the three actors portraying a true detective, wasn’t really given much to work with anyway. Seriously, I don’t know if Paul had to raise his voice past an exhausted mumble more than once. And even then it was to call his mother a kooz.

And Frank, Frank is done, man. Frank finds out that his operation is so polluted with back-stabbing and double-crossing that the only friends he has left are his wife and probably that kid he called golden last week. And I’m not even sure Jordan isn’t going to break out a last minute betrayal in next week’s epic 90 minute finale. For now, Frank’s off to retirement somewhere warm. But first he’s making a list and apparently not checking it twice because it just repeats itself halfway through. 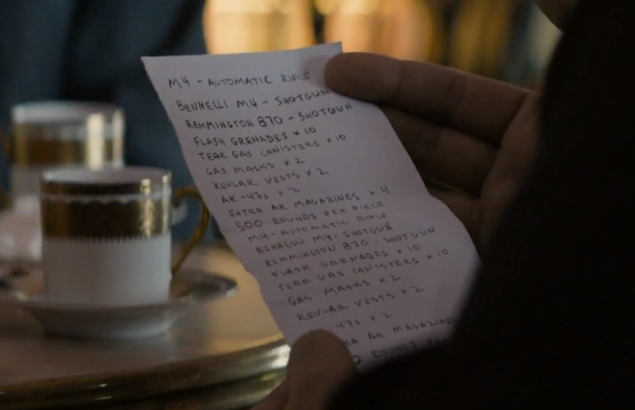 I love how Frank’s plan on the way out the door is “don’t let the Russians know we’re wise to their plan but also BURN EVERYTHING.” Honestly though, Frank calmly wheedling out all he could from his double-crossing red-headed henchman before shooting him was the best Vince Vaughn was all season. I can take lines like “I always saw a difference between a whore and a pimp. A whore can still have integrity” when Vaughn is playing Frank as so genuinely frazzled, angry and surrounded by enemies he didn’t even know were there that he can’t help but say dumb things before smashing a glass against your head in super slo-mo.

So with one more episode left, we still need to learn exactly why Caspere was killed, who killed him, and what the hell is going on with those blue diamonds and the jewelry store kids who grew up to be Caspere’s assistant. Not to mention the deep web of corruption and conspiracy that off-the-radar Ani and Ray are going to try and blow wide open. At the very least, we finally know who killed Stan. Rest easy, world. We can all sleep tight again. Stan’s death has been avenged. 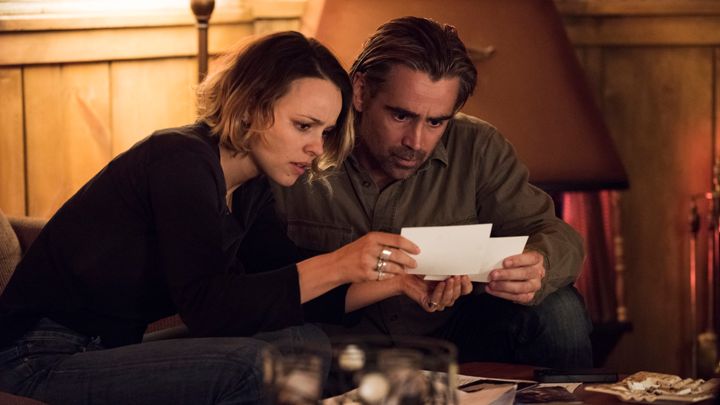