A full two days after its airing, I just now got around to watching True Detective‘s second season finale. And by “just now,” I mean I started it last night, had to pause it during the “previously on” segment to look up names, fell asleep multiple times out of a combination of boredom, frustration and confusion, and finally woke up to see Frank and Jordan having a discussion — something about white suits and red roses? — whispered “no, no I’m going to bed” and finished the rest this morning. It was an ordeal, let me tell you.

But what better word is there to describe True Detective‘s second season than “ordeal?” Every Sunday felt like you were headed to your second cousin’s bar mitzvah party — like, you don’t want to go, it’s not going to be any fun, but you did sort of RSVP way in advance. And remember that stomach-drop feeling from middle school when a teacher assigned homework on a Friday? That’s how I felt after every episode of True Detective season two. A brief sigh, then “whelp, guess I better start trying to make sense of all that.” The whole thing was as congested a mess as the California highways, and navigating it was somehow even less pleasant. And if anyone thought the season finale would act as the proverbial high speed rail line, they came away disappointed.

So, no, I don’t agree with my editor Drew Grant’s assessment that Season 2 was better than the first. But, again, while she didn’t buy in to season one’s buzz, I bought the fuck in. Hard. I bought in so damn hard I own a t-shirt from the HBO store — and yes, there is an HBO store — that says “Touch darkness, and darkness touches you back.” That is a quote from season one. What does it mean? I don’t know! For all its vague philosophy, red herrings to nowhere, and McCona-stache True Detective season one at least kept me enraptured for all eight episodes.

It’s because of this that I can’t quite give up on the True Detective brand, even after the dreary mumble-fuckery that was its second season. Instead of writing it off completely, let’s take this as a time to reflect, and to learn. Here are some things for us — both the critics, the audience, and the creators — to remember as we look onward to True Detective season three, and beyond.

Remember #TrueDetectiveSeason2? The hashtag that started approximately the moment Errol Childress buried his axe into Rust Cohle for approximately the seventeenth time? God, remember the speculation on the casting and the story and the direction that didn’t quite reach Jon Snow-watch levels of ridiculousness but still permeated all TV journalism for months on end? Brad Pitt was going to star. Wait, no, Michael Fassbender. Wait, WAIT, also Jessica Chastain. Or is it Elisabeth Moss?

In a way, I almost feel bad for True Detective season two. That tidal wave of conversation leading up to it basically guaranteed disappointment. Even if it had been great — which dear lord it wasn’t, but still — it still wouldn’t have been as great as the dream scenario or ideal casting you concocted in your head. Weeks into this season, every review (including ours) had to, at least once, mention season one. At the very least, they had to mention Matthew McConaughey. That’s just the danger of brewing up some sort of perfect storm in your first outing, and then hitting the reset button. But it’s also a case of a bar that doesn’t even really exist yet being set at an unobtainable level.

So let’s just let this one breathe for a while, right? Maybe no #TrueDetectiveSeason3 until we get some actual news.

The one thing I hear the most as a TV critic is “if you don’t like it, why don’t you write a better show?” While that is a ridiculous statement 99% of the time, I do sometimes feel strange giving advice to a person who creates TV I could never create. However, I feel absolutely no qualms whatsoever in offering this piece of advice to Nic Pizzolatto: Just because you mention a character’s name once does not mean we will remember A) Who that character is five episodes later and B) Why they are important.

True Detective season two should have been the first show to come with an accompanying IMDB screen for all the time I spent looking up a character’s name. The most unintentionally funny moment of the season came when Black Mountain goons led Paul down into the tunnels, and from the shadows stepped Police Chief Holloway. If your window was open, you could actually hear the world’s largest collective “wait, who?”

I’m not saying dumb down the story, or make the mystery or the conspiracy go any less deep. I’m just saying: if someone strolled through your office right now, sort of made eye contact with you a little and then left, would you remember that person five weeks from now? Probably not. But if they walked in and did something meaningful, and made you care about them, there’s a chance they would stick in your mind. With that said….

Hopefully, the minds behind True Detective are up for some fat-trimming come season three. However, with THAT said…

Harsh, I know. But my original idea for this list included things like “Maybe don’t make the murder victim a rich old white guy so we actually care he is dead?” But then I thought back to the oft-quoted, not exactly glowing profile Vanity Fair wrote on Mr. Pizzolatto. I thought about his quote on what makes True Detective, True Detective: “Me. Crime, detectives, intimacies, and ideas … but it’s all just me.” And then I thought back to season two as a whole, about how it was as nihilistic as it was confusing. About how, inexplicably, it was as impossible to understand as it was predictable. Above it all, at all the most puzzling parts, it felt like I should be getting it. It was TV that made me feel dumb, and at no point did I get the feeling Nic Pizzolatto was interested in helping me out.

I once wrote that even at True Detective‘s worst, you can see what Pizzolatto was going for. I actually think this is because he will write the scene, the dialogue, or the entire show he wants, regardless of reaction. I’m not even sure that’s a bad thing. Surely, it’s true of all top writers and showrunners. But I got a unique feeling off of True Detective season two. It was almost this vibe like “if you didn’t understand this mystery, that’s your problem.”

It goes back to managing our expectations. What we can not only expect each season, but are guaranteed, is Nic Pizzolatto. This means we are also guaranteed all the Pizzolatto tropes — the darkness, the philosophy, the fact that two people can carry on highly complex conversations in a car without once driving into a tree. If season two proved anything, it’s that if we don’t like these tropes turned up to the maximum that is in fact our problem, and it’s not going to change. However, with THAT being said…

Remember before, when I mentioned the dangers of hitting the reset button? Well, I also think it’s important to remember that there IS a reset button. It’s a shame that this season of True Detective was such a mess, because it’s hard to even consider True Detective a worthwhile show anymore. But when season three comes around, it’s a whole new show. I thought American Horror Story: Freak Show was also a direction-less mess, but i’ll probably still come around for Hotel. Because I’m not getting Freak Show, I’m getting something new and something familiar at the same time. I’m hoping that when I do the same for True Detective season three, I won’t have a vastly smaller audience joining me.

Of course, the moment anyone starts complaining about robot dicks I give full permission to leap off this ship as fast as possible. And finally…

Uh, actually that’s just it. Don’t do that. That goes for writers, directors, friends of Vince Vaughn, people that happen to pass Vince Vaughn on the street. Anyone, really. It’ll sound silly, and forced, and just uncomfortable all around. Just don’t do that. 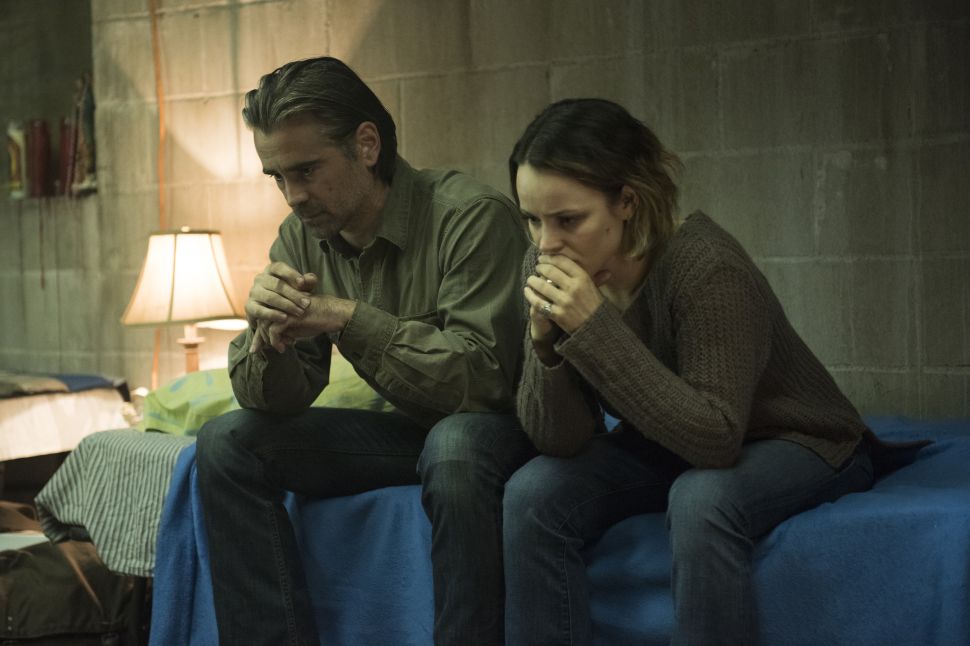