So you’re considering challenging Mayor Bill de Blasio at the polls in 2017. Congratulations. You aren’t alone.

Don Peebles says he’s considering it. Eva Moskowitz has said she an “interest” in running. Others have seen their names floated in the press: Public Advocate Letitia James, Comptroller Scott Stringer, Bronx Borough President Ruben Diaz Jr., Brooklyn Borough President Eric Adams and Congressman Hakeem Jeffries—who has said repeatedly he will not run, only for the talk of him running to intensify. And those are just the Democrats.

News reports have breathlessly reported on the would-be campaigns of those who, reports say, could challenge Mr. de Blasio—but, with the 2017 primary more than two years away, none of these candidates have done anything to indicate they’ll actually turn their consideration into action.

“I’m considering moving back to Queens and running for mayor. I mean why not?” joked Doug Muzzio, a Baruch College public policy professor. “It’s good for the ego, if not good for the political career. It’s also good for media outlets and reporters to stoke this stuff—you know it’s the slow season. It’s August, and you need some city news, and why not who’s running for mayor? It’s entertainment.”

So what exactly does it mean to consider running for mayor, then? Not much, according to Mr. Muzzio and other city politics watchers and consultants who spoke with the Observer.

“Anybody can say anything until the day the filing needs to be done,” Democratic consultant Hank Sheinkopf said. “Until the day you have to raise dime one, or put up or shut up.”

“There is no overt move by any of the people who have been mentioned to run,” said George Arzt, a political consultant and longtime aide to former Mayor Ed Koch.

There are plenty of downsides to actually running against Mr. de Blasio, especially in a Democratic primary—having to raise lots of money, build coalitions, get unions on board, campaign in the far reaches of the city, and of course the potential for an embarrassing loss that, for many of those named, would also mean a loss of their current position and alienation from the mayor. (Among current office holders whose names have been bandied about, Mr. Jeffries stands out there—he wouldn’t have to give up his congressional seat to run, unlike the borough presidents, comptroller or public advocate who are up for re-election at the same time as the mayor.)

But none of those downsides come with merely thinking about, considering, floating, or being interested in running for mayor. And everybody likes to be mentioned.

Even then, if the would-be candidate decides not to run—or tells the mayor they don’t know where the rumors are coming from—they can salvage the relationship and even curry favor with the incumbent, Kenneth Sherrill, a professor emeritus at Hunter College, said.

“It’s like being mentioned by the great mentioner, for anybody whose name is ever floated for president or something—and then the incumbent has a great sigh of relief and is eternally indebted to you when you decide not to do it,” CUNY professor emeritus Kenneth Sherrill said.

Mr. Sherrill said many of those being floated for 2017 are probably more interested in 2021, when their citywide terms are up and they wouldn’t have to challenge Mr. de Blasio—but it’s not bad having their names out there now. The only downside is if a challenger’s candidacy is immediate laughed off, which so far has not happened.

Mr. Sheinkopf said the attention that comes with being mentioned as a potential challenge is an upside—but can also be a downside, brining plenty of scrutiny.

“There are two issues. One is, it’s flattering. But the other side of flattering is when 20,000 people or 10,000 people or a whole bunch of people keep mentioning your name, they pay attention,” he said.

Most of the political watchers the Observer spoke to thought it unlikely the Democrats named would actually challenge Mr. de Blasio—though some thought Ms. Moskowitz, a foe of Mr. de Blasio’s dating back to their Council days, might be game for it. Few thought anyone would be able to unseat the incumbent, at least without a major debacle in the next two years.

“I think it’s really premature to be talking about the mayoral race. I think it’s extraordinarily difficult to beat an incumbent,” Mr. Arzt said. “You would need a real crisis to beat that incumbent, and there is no crisis currently. And de Blasio is a very, very potent figure. He has access to fundraising, he can do a lot of things. It’s just silly to be talking about that now.”

But Fordham professor Christina Greer wasn’t so sure the mayor was safe from a Democratic challenge.

“The earlier, the better,” she said of those candidates whose names are out there. “I’m sure some of them have thought about it, in the most quiet recesses of their mind.”

She said people could get so frustrated with the mayor that it creates a real opening, and that Democrats might be emboldened to challenge Mr. de Blasio—who did not exactly have establishment support in his 2013 bid—after seeing successful upstart campaigns like Mr. de Blasio’s own win, or President Barack Obama’s run against Hillary Clinton.

“I think what we’ve seen lately is that things change so rapidly, and you can’t necessarily bank on narratives that will hold through the next two to three years. Ask Christine Quinn,” Ms. Greer said. “The political tide changes, people come and people go. In many cases, there may be a closing, but in other cases there may be an opening.”

And if just one candidate gets in, Ms. Greer said she suspected they all would.  “All it’s going to take is just one legitimate person to jump in, and then everyone jumps in. Because why not?”

But actually taking on an incumbent is “a very, very risky business,” Mr. Sheinkopf argued, and an endeavor candidates need to be able to survive. That can be tough if the person needs the mayor for anything—because politics, he said, is “always personal.”

“The mayor remembers who’s trying to take his job from him,” Mr. Sheinkopf said.

And Mr. Muzzio was skeptical that some of those being named were even considering running, let alone ready to do it. “Some of it’s just LSD dropping,” he said. “It’s just, no. That ain’t happening.”

Mr. de Blasio has struggled in recent polls, and the narrative in the press has been that his weak performance has opened him up to challengers look to exploit his sagging popularity. But Mr. Sherrill—who allowed perceived weaknesses on issues like Times Square desnudas and horse carriages distract from the mayor’s ability to tout his achievements—wasn’t so sure that analysis was totally accurate.

“I think some of the people who are floated aren’t doing it because the mayor is perceived as being weak, but rather to increase the perception that the mayor is weak,” he said. “And I think there’s one paper in particular that’s probably doing that.”

(The New York Post, which is running a countdown clock to the end of Mr. de Blasio’s first term, has been especially focused on who may challenge the mayor.)

So when will be it be more clear whether any of these thoughtful people are actually going to do more than consider running? Sometime next year, observers said. Ms. Greer thought the field could be shaped by the presidential elections—might the national tide leave people wanting a Latino mayor, or a woman in charge?

Mr. Arzt said if any of the candidates are serious, they’d start taking some actions in the first half of 2016.

“You take a look at polls, they could try to meet with people, get alliances,” he said. “But nothing has happened. Unless something really happens to shake up the city, I don’t see it an easy road to beat de Blasio.”

When he worked for Koch, Mr. Arzt said they didn’t pay much attention to the a potential challenge at this stage of the game.

“The whole idea is not to worry about the other guy, but to do your job and get results done so that you can take it to the voters and say, ‘Look what I’ve done,” Mr. Arzt said. “It’s silly to worry about someone who may or may not run.” 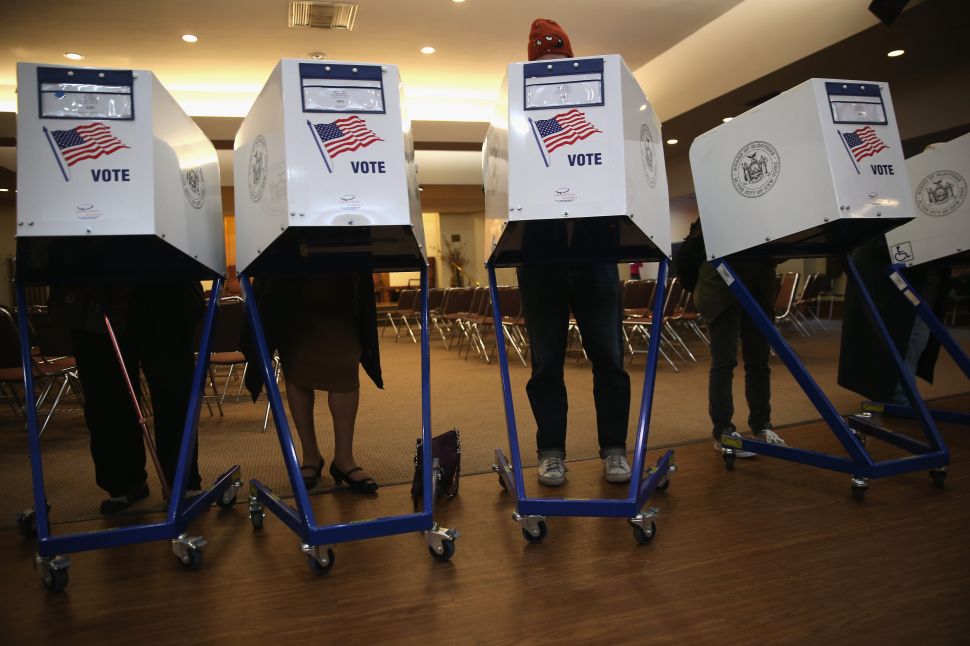