In the dog days of summer, the markets are definitely barking: sell, sell, sell. Last week, almost every major stock market around the world fell, most notably China’s 11.5% nose dive. In the United States, the S&P declined yesterday for the sixth consecutive session. The reasons for the global market meltdown include uncertainty regarding China’s slowing economy, sustained low oil prices, and the possibility of the Federal Reserve raising interest rates. One prominent market strategist at a global investment bank dredged up the ghost of great financial crisis, saying the market is trying to “find the next 2008.” Clearly, investors are spooked.

During difficult times, Gotham fires up the bat signal, in hopes that a masked man will restore law and order to a city beleaguered with crime. When it comes to turbulent market volatility, Wall Street turns to a bespectacled superman whose financial insights serve as a compass. Over the last week, investors have been asking, “What in the world is going on with the markets?” But they really should be wondering, “What would Warren Buffett do?”

Tune in to the Warren Buffett News Network

I swear Mr. Buffett’s glasses give him special powers. He’s able to see past market downturns, identify compelling investments, and turn a news story upside down. For example, look at how the New York Times reported the market volatility on August 24:

“A sudden reversal in United States stock prices late in trading on Tuesday produced a sixth consecutive session of losses and heightened uncertainty about the challenges facing global markets.         The wild swings in prices over the last two days have been the most extreme since the financial crisis. The benchmark Standard & Poor’s 500-stock index surged as much as 2.9 percent on Tuesday, but ended down 1.4 percent. The resurgence of volatility has overturned a sense of comfort…”

Now let’s consider how the imaginary Warren Buffett News Network would report the same news. Instead of broadcasting from the New York Stock Exchange, it would be shot at Mr. Buffett’s small abode in Nebraska that he bought in 1958. And the story would be quite different:

“Great, amazing news! There’s a worldwide sale on global stock prices. Here in America, stocks have become cheaper over the last six days. The volatile swings are reminiscent of the financial crisis, when value investors like me scooped up magnificent, valuable assets at cheap prices. In China, there’s a 12% sale on stocks, and they are trading at bargain levels! Investors are hoping for sustained uncertainty so that the sale can be extended for another week – or even a month! The decline in prices have investors in a buoyant mood, clamoring ‘let’s make a deal’ and ‘buy, buy, buy.’”

In Benjamin Graham’s The Intelligent Investor, financial journalist Joseph Zweig annotates the legendary value investor’s insights with a similar thought experiment. Zweig makes the case that Graham, like his disciple Mr. Buffett, is a contrarian value investor who almost welcomes bad news. When people say buy, Mr. Buffett is thinking sell. When markets are jittery, he is calm. “The cheaper stocks get, the better I like them, whether it’s our stock or somebody else’s,” he said in 2011, after he bought $4 billion in Berkshire Hathaway stock. Mr. Buffett followed this counterintuitive logic even in the most difficult of times, during the throes of the 2008 financial crisis and explained his investment thesis in an op-ed:

“In the near term, unemployment will rise, business activity will falter and headlines will continue to be scary. So … I’ve been buying American stocks. Why? A simple rule dictates my buying: Be fearful when others are greedy, and be greedy when others are fearful…These businesses will indeed suffer earnings hiccups, as they always have. But most major companies will be setting new profit records 5, 10 and 20 years from now.”

Mr. Buffett knows that if you constantly chase the market, you’ll end up losing money in trading fees and tax bills (you only pay when you sell). So in the case of the recent China-induced market jitters, Buffett is as cool as a cucumber, sipping a Cherry Coke, and not letting the daily fluctuations get to him. “The sillier the market’s behavior the greater the opportunity for business investors,” he once observed.

In the midst of the recent financial turmoil, Buffett would advise you to do what he did. Buy stocks in the best companies while prices are down. He might even tell you – don’t look at the stock price, just invest if you think the company will be doing well in five to ten years.

If you are looking for stocks, make sure to screen them using his criteria: companies that have ample cash on hand, or assets that can be sold or converted readily into cash. This provides a buffer in case the ghost of 2008 is back, and there’s a wider credit crunch. To replenish this wealth, companies should have consistent and substantial flows of earnings. Finally, they should be conservative and mature enough that near-term changes in market conditions do not result in the need to spend a lot of cash. Two stocks that seem to pass muster are Wal-Mart and Johnson & Johnson.

In the investment world, Mr. Buffet says that you must have the courage to pull the trigger to buy a stock in market downturns. But before you do, make sure you ask the question – what would Warren Buffett do?

Kabir Sehgal is the author of the New York Times best seller Coined: The Rich Life of Money And How Its History Has Shaped Us. He is a former vice president at J.P. Morgan and a Grammy-winning producer. Follow him on Twitter and Facebook. 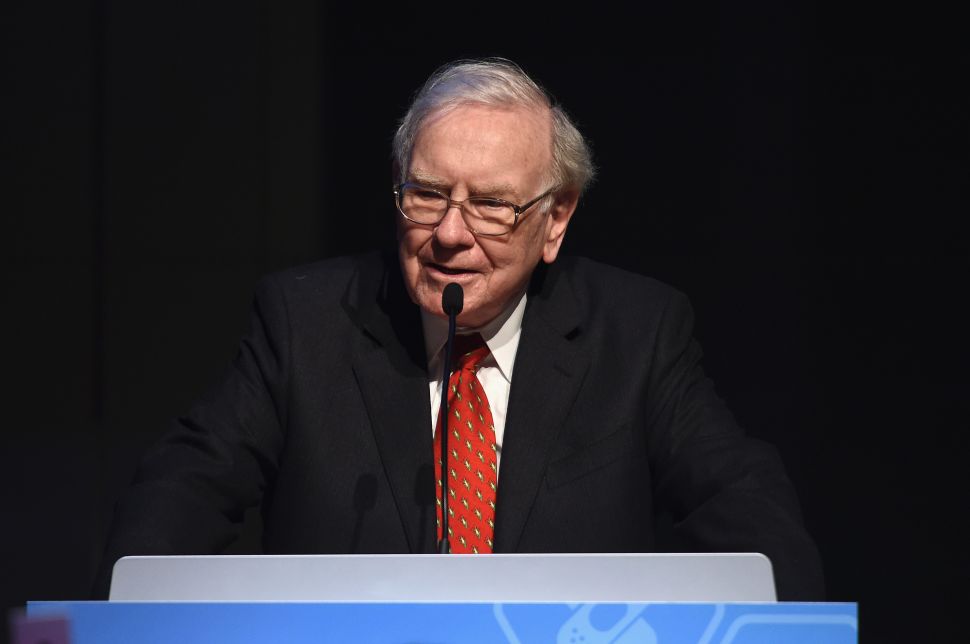