I’ve written and rewritten this blog in my head several times over the past few months. As many of you know, I have been recovering from anorexia since April. I was at an Ivy League school, a D-1 athlete and should have been living my dream. Nobody expected me to end up in the hospital with an eating disorder freshman year, especially me. Now that I have had an abundance of time to reflect on the past few years, I understand what precipitated my eating disorder and have gained a new perspective on the world around me as it relates to eating, health and body image.

I have always been a perfectionist in everything I do, pushing myself to my limit and beyond no matter what the endeavor, large or small. In high school I wanted to be a straight A student, a D-1 athlete and, sadly, more important than all, I wanted to be skinny. I followed rules from my parents, rubrics from my teachers, and directions from my coaches to the letter. So in my junior year of high school when my club gymnastics coach told me I needed to lose ten pounds, I was determined to do exactly as he said. At the time, like many girls my age, I was already having body image issues and confusing puberty with getting “fat”. Thinking I was doing what was needed, I began to throw up after dinner. It didn’t take long before I began purging twice a day but I convinced myself that I didn’t have a problem since I never binge ate and only ate “healthy” foods. I began constantly to compare my body to others. I followed fitness and health food accounts on Instagram and became obsessed with being as fit as possible. Despite how close I was to my friends and family, no one knew what was swirling inside my head. And I had absolutely no idea that I was suffering from anorexia.

By the time I got to college last fall, I decided I wanted to stop the purging and feel “normal” again. I focused instead on becoming even more fit. I began doing extra cardio daily in addition to my hours of gymnastics, and constantly felt like there was something more I could do. I gave into the “gluten free” fad and descended down a slippery slope of eliminating all the “bad” foods from my diet. I downloaded a calorie counter on my phone and I told myself If I was going to be healthy, I was going to be as healthy as possible. I mainly ate salads — and took the dressing off. I drank tons of to fill myself up. I stopped putting milk in my coffee. My favorite foods — avocados, sushi, peanut butter, bread — became fear foods. I no longer ate carbs, and eventually even the calories in gum seemed to be too much for me. How ironic that my “healthy” lifestyle was nearly killing me.

As I began to get sicker, I pulled away from my friends and family. I obsessed over how I appeared in Instagram and Facebook photos. Around February, I began avoiding eating with people and I was constantly tired, unhappy and cold. My hair was falling out in clumps and my skin was dry and dead looking. I struggled to socialize because all I could think about was food and exercise. The way I looked and what I ate became the most important part of my life. As I deprived my body of nutrients, I deprived my brain (which is normally 60% fat), thus making rational decisions nearly impossible. I was able to convince myself and others that I didn’t have a problem by disguising my food restriction as self discipline. Nobody knew or noticed. I was competing for my team and earning straight A’s. I was even getting compliments on my appearance. By March, I had deemed almost all foods “bad” except egg whites and greens. I thought of myself as healthier than everyone around me. Little did I know that I had a resting heart rate of 30 and was at risk for cardiac arrest.

In April, the “gradual” weight loss abruptly became drastic. My kidneys were failing and my organs were shutting down. My body was deep in starvation mode. Finally I recognized how weak and sick I felt and I was scared. My mom was shocked by my Facebook pictures. Still, I didn’t connect my symptoms with my eating habits until my mom arrived on a red-eye, helped me navigate the healthcare system and I was admitted into the ICU. On April 15th, I began the toughest chapter of my life thus far: recovery.

I spent two and a half weeks in the hospital, much of it on strict bed-rest with continuous monitoring of my heart and other vitals, during the initial slow, steady, often painful, refeeding process. When my heart rate was finally stable, I was discharged and placed on a strict meal plan, implemented by my mother. Once the body has experienced starvation and the nearly fatal process of shutting down, even a small weight loss can trigger the whole process again, even many months after weight has been restored. Eating five or six meals a day is nearly impossible to do alone: recovery from anorexia requires the full support of family. I was able to finish those last five weeks of my freshman year because my mother prepared and served the six meals a day prescribed by my doctors. But I arrived home only to be hospitalized again for a week. Just the increased activity and slight diet change while packing up and flying home had sent my heart rate plunging again.

Food is food and it is not something that needs to be earned.

It was easier for me to be motivated to start eating again when I was in the hospital setting and so clearly sick. As I have gotten better, I have become more aware of how much of my daily life as a young woman, a college student, and an athlete, encourages disordered eating. As soon as I began recovery, I unfollowed all food and health accounts on Instagram and deleted my snapchat in order to quiet the noise about weight loss and fitness that surrounds so much of today’s media. I needed to stop seeing what other people were eating, or what they were doing for exercise or how they looked in their gym clothes. I just needed to get better.

After two hospitalizations, I really understand how dangerous it is to try and alter your own body. If I look frail and bony at age eighteen, how am I going to look when I’m 60? Or how about 80? Will I even make it to 80? The thought itself is scary. In order to stay healthy, I have to remember that good health is something that is continuous and cannot be compared to others. This is my one body; we don’t get “re-do’s” when it comes to our own genetics and it may sound crazy but when I was sick this thought didn’t occur to me. I only cared about changing my body in the immediate and how I looked in the moment. If I felt full, I was fat. If I was hungry, I was skinny and there was nothing in between. Everything about eating and my body image felt urgent and dire, like eating the yolk of an egg would suddenly cause my pants to tighten or that obesity was going to sneak up on me one hour after eating a scoop of ice cream. I never thought about the effect that trying to change my outward appearance had on my heart, kidneys and long-term health.

Now I cringe when I hear someone mention how they want to go “gluten free” to lose weight. Or how they want to go “ano” for two weeks to get a beach body. I struggle to walk into places like Panera Bread or Starbucks where they have calories plastered next to every item. They fuel the ideas that precipitate eating disorders: that some foods are “bad”, or that we are supposed to feel guilty after eating a calorically dense food or that we have to earn our foods before we eat them. Food is food and it is not something that needs to be earned. Our bodies need a balanced diet regardless of whether we exercised that day or not.

As terrifying and hard as many moments of this process have been so far, the main thing I feel is relief.

So, as many of my classmates and friends have travelled this summer, held prestigious internships or taken summer courses, I’ve been recovering. I have spent my summer in doctors’ offices and labs and therapy sessions week after week and it has been as exhausting and taxing as a full-time job. My hair has slowly stopped falling out, my skin has light in it again, and I’ve gotten stronger. Even though I have been recovering for almost four months now, I still have to carefully manage my intake and exercise to be sure that my heart rate and blood pressure don’t drop. It shocked me to learn that even after regaining the weight I lost, my body still has so much more healing to do. I will be working hard at my recovery for a long time.

As terrifying and hard as many moments of this process have been so far, the main thing I feel is relief. Rather than wishing to be skinny, I wish for happiness. Rather than admiring girls whose bones show, I admire girls who can eat foods they enjoy without anguish. I wish to be able to get an ice cream cone with my little nieces and nephew and not cry inside. I wish fully and mindfully to experience college and life, not just see how it makes me appear on Instagram. But most of all, I wish for health and I wish to never damage my body again.

Anya Barca-Hall is a Public Health major at Brown University, class of ‘18. This article originally appeared on Medium. 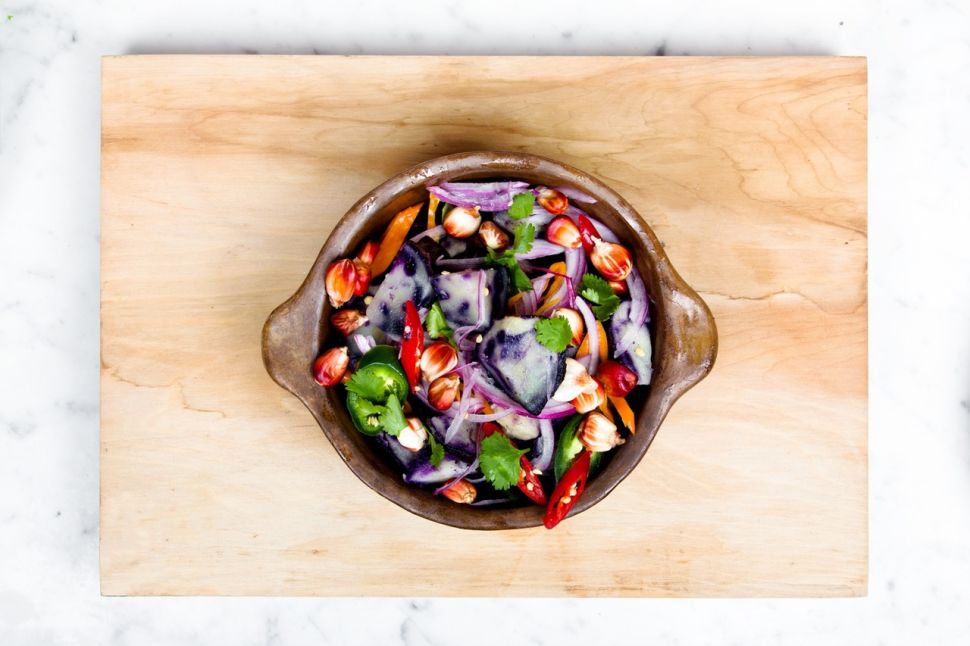