One of Hillary Clinton’s first television ads of the presidential campaign is all about her mother.

Just don’t expect to hear too much about mom and dad from her top rival, Bernie Sanders.

Mr. Sanders, an independent senator from Vermont running in the Democratic primary, proudly breaks many of the unwritten rules of American politics. He calls himself a socialist. He slaps few backs. And he doesn’t plan on taking the well-trodden path of touting his humble origins to connect with voters.

“The usual path is to begin with biography,” Tad Devine, a top adviser to Mr. Sanders’ campaign, told the Observer. “I don’t see us going there.”

Ms. Clinton has certainly gone there. As the most famous politician in America outside of President Barack Obama, the former secretary of state and first lady is hunting for ways to reintroduce herself to voters–if such a thing is even possible. Ms. Clinton’s campaign believes that her mother’s tales of hardship can demonstrate that she understands their plight, even if she’s spent much of her life in the spotlight and earned millions of dollars over the last decade.

Dorothy Rodham, the subject of a $1 million television ad buy in Iowa and New Hampshire, was abandoned as a child by her parents and was helped to survive by people around her, including teachers. She died in 2011. At Ms. Clinton’s campaign kickoff in June, Rodham was a centerpiece of her address.

“She went to work in somebody else’s home at age 14 and it opened her eyes,” Ms. Clinton says in one ad. “For the first time she saw parents who loved and cared for their children. And that’s the kind of loving family she provided for us. When she needed a champion, someone was there. I think about all the Dorothys all over America who fight for their families, who never give up.”

While Ms. Clinton holds commanding leads over Mr. Sanders in every poll taken since the Vermont senator entered the race in May, her unfavorable ratings remain high. Just 37 percent of all Americans have a positive view of Clinton, versus 48 percent who have a negative view, according to a NBC News/Wall Street Journal poll released Monday. A recent scandal surrounding her use of email when she was secretary of state appears to be taking a further toll on her popularity.

Her camp is hoping Dorothy Rodham is one way to flip those numbers.

“Her team has made a judgement that Hillary’s historical background is rich with potential problems and potential opportunity,” said Patrick Griffin, a political science professor at American University and a former member of the Clinton administration. “There are not many times you can reintroduce her, given her time on the field, and it’s a good opportunity to create a narrative for her that works.”

Mr. Devine was dismissive of this approach, hinting that Ms. Clinton is simply mining poll data to determine what she believes in. (A spokesman for Ms. Clinton did not return a request for comment.)

“They spent a million dollars in polling in less than a quarter. We spent zero,” Mr. Devine said, adding that he hoped to invest in polling soon. “I think Hillary’s message really comes out of that research. That research has led them to their decisions about media. This is the stuff that tested the best, therefore it’s going up on TV.”

“You’ve seen it in state polls; her image has deteriorated,” he added. “There’s a need for the campaign to get into reshaping her image. That’s where they’re coming from.”

As his populist stances begin to resonate with a slice of the Democratic electorate hungry for uncompromised liberalism, Mr. Sanders has not made much of an attempt to reveal Bernie Sanders, the person, to the public. Rather, Mr. Sanders proudly boasts that this campaign “isn’t about me” (paradoxical perhaps for an individual seeking the most powerful elected position on Earth) and portrays himself as a vessel for progressive ideas, a mere messenger.

He will talk about yawning income inequality, the need for publicly-financed elections, the threat of climate change, the rising costs of college, and the importance of bolstering labor unions. He will not readily talk about the woman who gave birth to his lone biological son–Politico reported it was a former girlfriend, and not his first wife–or his decade as a fledgling Vermont activist before he became the mayor of Burlington in 1981.

The Brooklyn native’s biography is not entirely absent from the trail. In his campaign kickoff speech, he noted his father emigrated from Poland and worked as a paint salesman, and that his mother died young. “My parents, brother and I lived in a small rent-controlled apartment,” he said.

“I think that’s part of story, but I don’t see it being the mainframe,” Mr. Devine said. “The mainframe is going to be Bernie’s message as he delivers it and that he’s prepared to fight on behalf of ordinary people.”

This week, a five-minute web ad released by the Sanders campaign devotes roughly 25 seconds to his parents. “My mother was born and raised in New York City. She died at the age of 46,” he says. Old family photographs appear onscreen. He recalls being surrounded by immigrants as a child–and then uses the memory to pivot to another policy position.

“I grew up in Brooklyn. Many of the families were immigrants and they understood the importance of education,” he says. “We don’t have a strong economy unless we have a very well-educated workforce.”

“There’s a lot of rich biography,” he said. “When Bernie went to visit his ancestral home in Poland years ago, it turned out a lot of his relatives were victims of the Holocaust. One of the reasons his father left Poland was the threat of dire economic circumstances.”

“A guy like me who makes TV ads, those are powerful stories,” he added. “But it’s not going to be as relevant for what we’re trying to do.”

The Sanders camp simply feels the ideas of a 73-year-old democratic socialist are more compelling than the socialist himself. Some observers think Mr. Sanders will end up getting more personal, anyway.

“With regards to socialist candidates, their leftist politics seems to overshadow that they are ordinary people with families,” said Robert Shapiro, a political science professor at Columbia University. “One could argue Sanders may have a bigger incentive to offset that image of classic lefitism.” 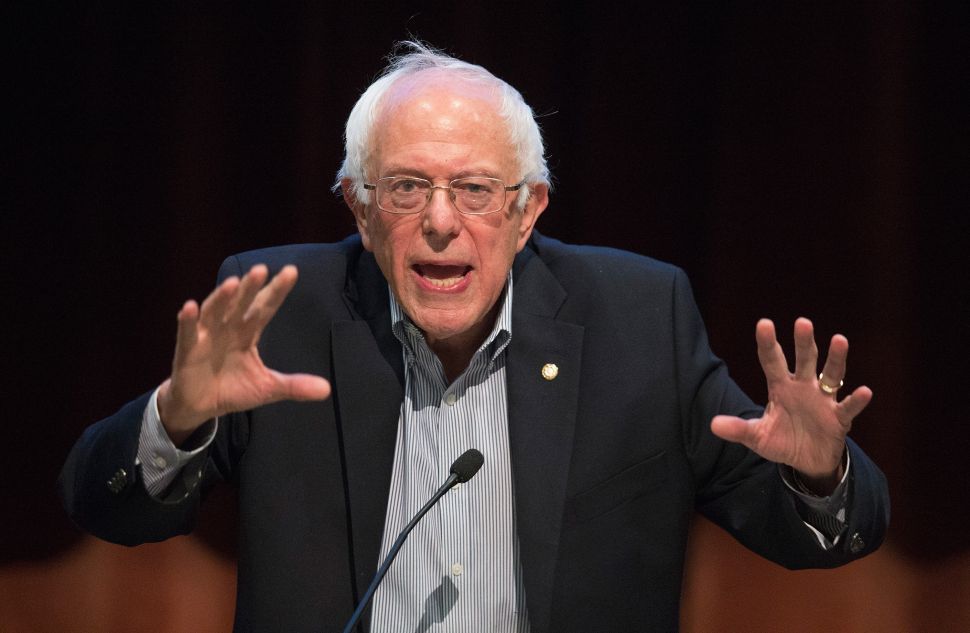