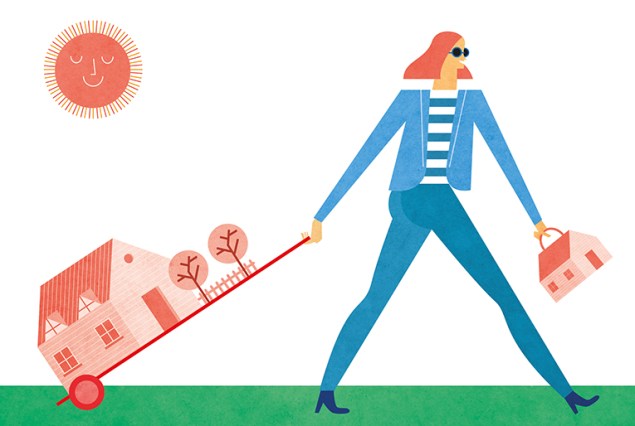 The only thing that stands between me and homelessness is $4,195 a month. Or, as of July, $5,376 a month. That’s what I pay in rent, now that I am no longer a homeowner. Well, not that I was a homeowner before so much as a home mortgager. But there was something about throwing several thousand dollars a month at a mortgage that felt so much more secure than throwing several thousand dollars a month at rent.

It’s not, of course: They’re both vain attempts at holding back the beast of the night. (Can you tell I’ve been catching up on Game of Thrones?) But you know what I mean: You fling money out into the Universe in exchange for the promise that, for the next 30 days at least, nothing will come along and eat your leg while you sleep.

But when you own the house, you feel that much more secure when you close your eyes. Or at least I did, all those 20 years I was a homeowner. I think of my life before I bought my first house as provisional. And since I sold my last house and moved not just to a rental but to a furnished rental, I feel provisional again, as if I’m a half step away from having my decrepit body loaded into a canoe and simultaneously set aflame and pushed out to sea.

I’m at the stage of life where everybody around me is finally cleaning out their basements. They’re letting go of everything that doesn’t bring them joy! They’re selling the big old family house and downsizing to a whaler’s house on the coast of Maine or a co-op overlooking the Brooklyn Bridge or one of those teeny, tiny houses that looks a bit like a really cute coffin. Everywhere, they extol the joys of clearing out the crap: how much lighter they feel, how liberated from the tyranny of all that stuff.

I’m here to tell you: I miss my stuff. I used to sit in my living room, my gorgeous living room, and look around at the elegant blue couch and the real Heriz carpet I got at an auction in Pennsylvania for only $400 and the hundreds of signed books and the silver-framed pictures, and think: What would I take? If I had to escape from here, if I wanted to escape next month, tomorrow, today, what would I grab as I ran out the door?

By the time I left, I had my list down to the feather (literally), and it was pretty damn lean. I wanted some paintings and family pictures, a few odd items that my husband didn’t care about but that meant something to me: a black and red painted pitcher that was the very first thing I bought at a flea market, a papier-mâché monkey mask, my father’s old Olympus camera. It wasn’t worth lugging the heavy Empire sofa and the battered trunk and the hand-woven rugs cross-country, even if I’d had a place to put them.

I did consider briefly, both when I was married and after I decided to get divorced, to buy a beautiful, charming, and not-too-expensive house up in some congenial corner of the country primarily as a repository for all my lovely stuff. I still like to visit my favorite rural real estate site, Berkshire Property Agents, to fantasize about the life I might be leading if I’d decided to spend $295,000 on what would have amounted to a super-charming storage unit.

But then I spent a weekend at a friend’s gorgeous, quiet, historic house in the perfect Catskills location and by Hour 11, I was eyeing the beams to decide which one would best support the noose.  And that was on a sunny day. By the end of the second winter, I figured, I’d weigh 300 pounds and be talking to the mice.

I no longer believe that my Life Would Be Perfect If I Lived in That House, one of my favorite book titles ever. I bought Meghan Daum’s book, though I didn’t actually read it; I only wanted to possess the title. Maybe I quit reading because after striving for years toward the house of my dreams, I finally lived there and my life was still the same, only with a prettier angle of light filtering through the windows.

It’s a young person’s illusion that a house can shape happiness. I don’t believe that any more than I believe good parenting can create a problem-free child or that eating organic vegetables means you’ll never get cancer. Oh right, young people believe those things, too.

In the mid-’90s, before Zillow, before StreetEasy, I had an idea for a book called House Hunter. The idea was that I’d travel around the country looking for iconic houses: a penthouse in New York, a beach house in Florida, a ranch in Montana. Part of my pitch was that I’d donate a portion of my profits to the homeless. So not only did I invent HGTV, I invented cheesy entrepreneurs “giving back” in the service of their own pocketbooks. Take that, Al Gore!

Now that HGTV allows us all to peek into other houses so much better than any book could, I realize that the configuration of a living room does not really open a window into someone’s soul. If it did, everybody’s soul in 2015 would have gray walls, cream linen furniture, and a Moroccan pouf providing a pop of color. I mean, what does the sameness of the legion of home sites—Remodelista, Design*Sponge, Domino—say about the soul of the American 37-year-old? She likes order, cleanliness, and a widely approved brand of quirkiness.

When we sold our house, the stagers moved out some of the antiques we’d so carefully collected and moved in a bunch of items featured on Fuck Your Noguchi Coffee Table. You know, the sheepskin rug and the sequined pillow and the straw market basket hanging from the coat rack that previously held, well, coats. Any sign of our real life was swept away in favor of an idealized life that might have sprung from the pages of a magazine.

My friend Kim used to call our favorite design magazine Houses You Will Never Live In. Its real name is World of Interiors, and I owned every issue published over all the years I was a homeowner myself. That collection was one of the few things my 32-year-old daughter, now in the grips of house lust herself, took when we divested.

When my husband and I bought our first house, we had only two requirements: It had to be cool, and it had to be cheap. That meant we were willing to compromise on less important qualities such as location and condition. So what if the house was 100 miles from our jobs in midtown Manhattan and had no functioning toilet? It had an amazing mural on the dining room wall and cost only $100,000!

This attitude led to more than a couple of house-buying mistakes. In fact, all our houses were probably mistakes. I never had that feeling one of my neighbors once described, of looking at her suburban house-to-be and thinking, “Well, there’s the next 18 years.”

That might be because I lived in the same house for the first 18 years of my life and couldn’t wait to get out. And yet, when my parents moved to Arizona a year later, and then Florida three years after that, I felt bereft, homeless in the spiritual sense of the word.  Home was the house I grew up in and I wanted it to be there for me to dip back into, once or twice a year, for not too many days.

My grownup kids felt that way about our house in New Jersey, the one we just sold. They always acted like they were doing us a big fucking favor to come back, checking the train schedule and leaving before the dishes were done. And then they cried, real tears, when it was time to say goodbye.

I didn’t cry when I pulled away from my house in New Jersey, but I still miss it more than is reasonable. It’s like how your mother always drove you crazy, and then she got so sick, and so old, and it was a relief really when she died, except you still miss her every day.

That doesn’t mean I wish I were still there. Divorce aside, it was time with the kids grown to move on from those seven bedrooms and five fireplaces and $900 heating bills. I didn’t want to become one of those ancient ladies so determined to die in my own home I’d eat cat food to afford the $22,000 property tax bill. Instead, I’m aiming to become one of those old ladies determined not to die so my landlord can’t raise the rent to market rate.

One of the best things about moving to L.A. is that a lot of people, I mean non-24-year-old people, rent rather than own their houses or apartments here. Compared with New York, there’s a lot more available and the entry bar is so much lower: Somehow, the real estate agents here haven’t gotten the memo about the 15 percent realtor fees.

I met a woman here, a new transplant like me but in her 30s, who said she was “neighborhood dating,” spending a month each in 12 different neighborhoods, and then at the end of the year, she’d pick one to stay with forever, like on The Bachelorette.

I like that idea, but I think after my summer furnished rental is up, I’ll look for a house where I can nest and re-feather. I’ll paint the walls gray and buy a pale linen sofa; I’ll move my boxes with my kids’ baby clothes and my grandparents’ pictures across the country and stick them in my new attic, feeling more at home knowing they’re close by. 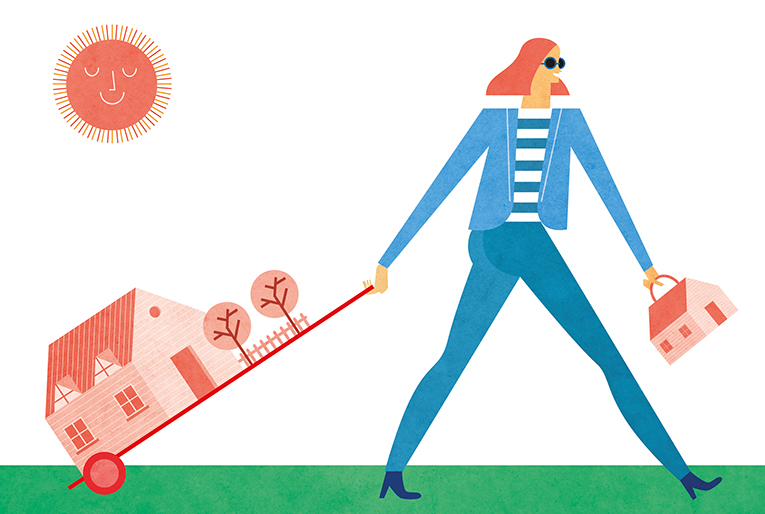