Yesterday, we navigated the superheroes, Ryan Murphy stab-athons, and puppet melodramas of ABC, FOX, and CBS. Today we dive into the last of the big four, NBC, along with all the options from CW, AMC, and Starz. Spoilers: there aren’t many, but they will all kick ass (and one is a musical!)

Blindspot (Monday, 9/21) – Blindspot has its problems. Jaime Alexander, who stars as a tattoo-covered Jane Doe, is being criminally underutilized even as a lead. But its intriguing, at the very least. I’m interested. I actually want to watch more than the pilot. Sometimes a strong mystery is all you need to stay hooked, assuming there is a satisfying payoff waiting at the end.

Best Time Ever with Neil Patrick Harris (Tuesday, 915) – Watch, but only if you flip between this and the Bastard Executioner, a process I’ve discovered creates actual psychedelic episodes. But really, Best Time Ever COULD be a fun, energetic throwback to the balls-to-the-wall variety shows of old, if it would just slow down for ten seconds. Because every show is live, this could happen in the future.

Heroes: Reborn (Thursday, 9/24) – So, Heroes’ first season was spectacular and unique. You remember. Save the cheerleader, save the world, and such? Then, its season finale was the anticlimax to end all anticlimaxes, and season two as a whole went off the rails. By the time seasons three and four premiered and were just okay, Heroes was dead in the . SO, fast forward six years and we have Heroes: Reborn, NBC’s 13-part attempt to revive the franchise. The question is: are we getting season one quality, or everything else quality? I’d recommend jumping on-board. We have more options in 2015. It’s just as easy to jump back off.

Chicago Med (Tuesday, 11/17) – Someone needs to tell Dick Wolf it’s okay to go a week without creating a television show. Especially if that show is another medical drama, which seems to offer nothing new to the genre. Chicago Med is an edition to the Chicago franchise (see: P.D, Fire), but I can’t see much value here outside of hardcore fans of that particular franchise.

Truth Be Told (Friday, 10/16) – It wouldn’t shock me if the sitcom formerly known as Everyone is Talking had to change its name because literally no one was talking about it. Truth Be Told‘s problem is that it sells itself as a comedy that “goes there,” but doesn’t seem to be about much more than two dudes that don’t really like their wives very much.

The Player (Thursday, 9/24) – Do you want to see a sharp-dressed Wesley Snipes beat up some people in Las Vegas? Of course you do. I do. We all do. But it isn’t exactly essential viewing week to week. Save it for later.

Crazy Ex-Girlfriend (Monday, 10/12) – If you told me about a year ago that my favorite pilot in 2015 would be a musical-comedy on the CW, I’d have to put down my #True Detective fan mug long enough to punch you in the face. But Crazy Ex-Girlfriend, originally developed for Showtime before landing on CW, is so damn pleasant, vibrant, and alive, a welcome addition to the graveyard that is this Fall slate. Rachel Bloom stars as the titular ex-girlfriend that follows her ex to West Covina, California, which is only two hours from the beach (four with traffic). If this world still has any justice in it, Ms. Bloom is going to blow up because of Crazy Ex-Girlfriend, and with good reason.

The FX’s and AMC’s of the world, along with premium cable like HBO, Showtime, and Starz aren’t exactly chock-full of new premieres this Fall. Actually, 2016 seems to be where it’s at (Looking at you, AMAZING trailer for HBO’s Vinyl). However…

Ash vs. Evil Dead (Starz: Saturday, October 31) – If you’re a fan of the original Evil Dead franchise, there isn’t much more you could ask for from Ash vs. Evil Dead. (If you’re not a fan, what’s it like being zero fun?) Bruce Campbell is back as Ash, Sam Raimi returns to produce and direct, and early looks are filled with quips and buckets of blood galore. Add Lucy Lawless to the mix, and Ash vs. Evil Dead makes a strong case for staying in on Halloween night.

Into the Badlands (AMC: Sunday, November 15) – Sometimes, when you want to sell someone on a show, you need to be gentle and let them know it is “subtle,” or “understated,” or “kind-hearted.” To sell them on Into the Badlands, you need to tell them it is a badass, post-apocalyptic mix between Mad Max and Kill Bill that is literally going to karate kick you in the face (note: not literally). 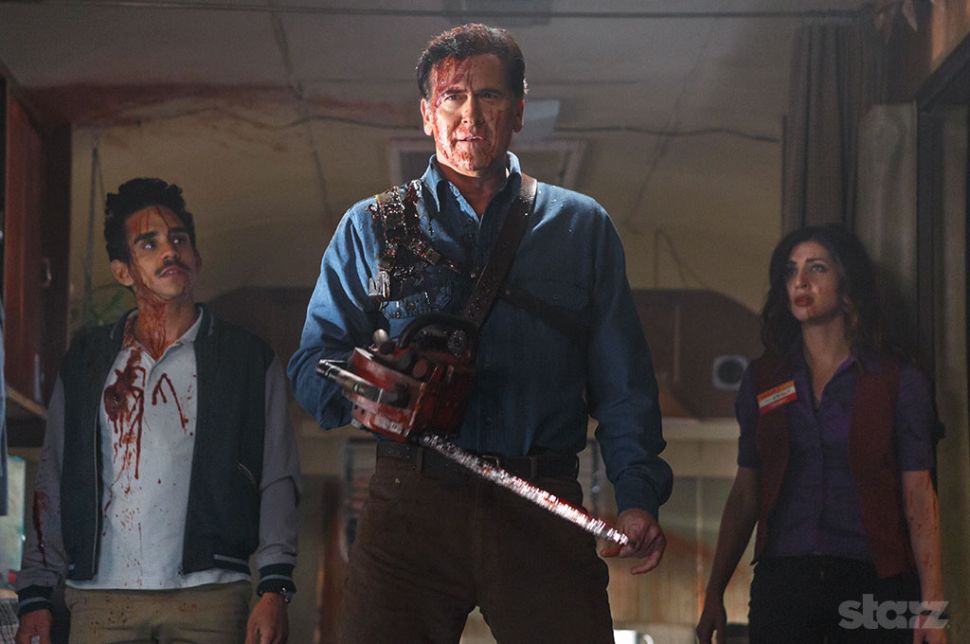