I don’t know if you guys have seen this show called Columbo but it is messed up with a capital UP. As I explained a few articles back, I accidentally watched this show for about 9 hours because I thought it was The Wire, then I had to go back and watch the actual The Wire in order to write about it, which took up so many hours I ended up failing improv and losing my bar backing job at Chuck E Cheese (yes, they have a bar). It was worth it because it was in my opinion the best TV show ever except for also Breaking Bad and The Supremos or whatever but it was longer than a bathroom line at a coke bar. I mean jeez, who wrote The Wire, David Foster Wallace? Anyways, back to Columbo. Columbo is basically a show about this creepy stalker who uses white male privilege to solve murders.

The first episode is completely bonkers. It begins with Columbo meeting this guy who looks like he plays bass in Fun. and knows where to get quaaludes. I guess this show came out in 1968 so everyone in it looks like a character from The Venture Brothers. So turtle neck guy has just murdered his friend with whom he writes mystery novels, and now he has to convince Columbo that it was an assassination. In the middle of all this, some rando Tinder skeeza shows up and tries to blackmail Professor Haircut about the murder, so he gets an Airbnb with her somewhere in the woods and then beats her over the head with a bottle of some kind of mysterious champagne that you can’t buy at a gas station. He dumps her in a lake and then eventually Columbo figures the whole thing out and arrests him. Pretty simple 20 minutes of television right? Wrong, this whole ordeal takes over an hour because 90 percent of the program is Columbo mansplaining murder to murderers (murdersplaining?).

Another episode involves Columbo investigating a suicide, which is when you take a selfie with a gun (selficide?), but it’s not a selficide at all. Columbo figures out that the guy was actually murdered by his boss who is also the leader of some kind of meet-up group for nerds. At some point Columbo calls a 14-year-old girl pretty and she says, “Thank you, no one has ever complimented me for my body instead of my mind” and she smiles while she’s saying it. Whoever wrote this line should lose their job. I mean I’m sure whoever wrote this is already dead but they should be dug up and fired and then buried again. This is either really sexist or I’m not getting the joke, but I don’t see how I could have acquired upwards of 35 twitter followers if I didn’t know what I was talking about. Anyways, back to nerd episode. Columbo figures out that the head nerd faked the selfcide using some sort of cool Rube-Goldberg machine like from an OK GO video or something. Again, this should take twenty minutes, but most of the episode is this cop walking around going on and on about paper clips that people have misplaced or footprints that they’ve left around, you know, really insulting the agency of these other murderers by explaining to them how they committed their own murders. I’m so angry about Columbo’s privileged point of view that I’m tempted to draw a cartoon explaining it. I’m a man though, so if I explain something that’s mansplaining, even if I explain mansplaining I am now effectively mansplaining mansplaining. I have confused myself. On to the next paragraph.

A third season episode titled Swan Song guest stars Johnny Cash as the murderer. Johnny Cash is the only country artist I like because he sang about cocaine and killing people, and I only like things that allow me to ironically affect a gangsta rap identity. The man in black is killing people and and jumping out of airplanes and everything’s going great, and then old C-Bo shows up and starts yammering on about how everyone’s dumber than him. Honestly I haven’t felt this assaulted by words since I huffed air duster and watched Jello Biafra do a spoken word set about hegemony. Columbo keeps doing this thing where he leaves the room and then pops back in and goes “oh and another thing.” If anyone ever did that to me I would block them on Facebook AND Twitter. Not Instagram though, I’m not a monster. He also has this creepy hunchback thing going on and I think maybe a glass eye. Columbo kind of looks like one of the elves from Harry Potter and he is just as annoying. Someone should make a Buzzfeed video titled “If Women Talked to Men the Way Columbo Talks to Murderers.”

Another thing that really bothers me about this show is that Columbo is constantly talking about his wife, and yet in the thirty years this show was on the air we never see her. Columbo fails the Bechdel test harder than I failed my drug test when I applied to be the guy in the Super Mario suit in Times Square. Seriously though, why isn’t Mrs. Columbo ever on screen? How offensive is that? I think the world is ready for a Columbo remake starring a FEMALE Columbo. Wouldn’t Kristen Wiig be the perfect Columbo? Let’s make this happen. Let’s kickstart this. 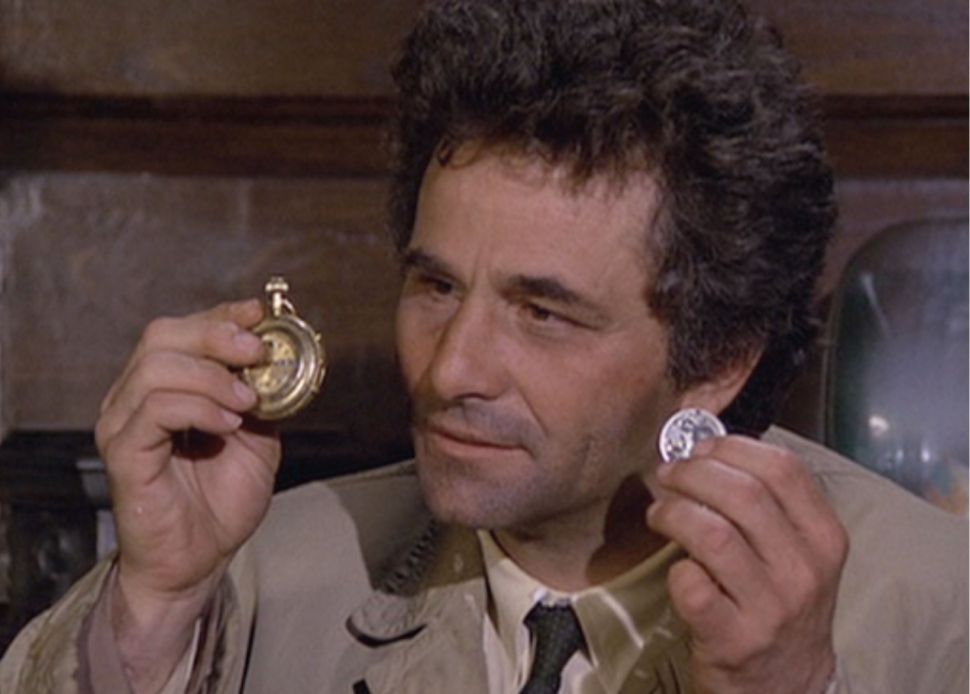