There’s a good chance you’ve seen the video of a white driver being pulled over by a black cop on a highway in Mississippi. A picture of the incident has already earned over 800,000 likes and 500,000 shares since Mike Powers — the white guy — posted it on his Facebook. Now, in exclusive Observer interviews with Mr. Powers and Jason Ales — the black cop — talk about their simple human interaction and why it broke the internet.

Here’s what happened this past Wednesday morning, September 2nd.

Mike Powers, a 27-year-old white male, was speeding through town for work when he was pulled over by 32-year-old black State Trooper Jason Ales. In an age of hashtag activism, in which some believe that using the slogan #alllivesmatter, like black Republican Senator Tim Scott did on September 3rd means you have cheapened the #blacklivesmatter cause while others, like Donna Brazile, believe that black lives are the ones in jeopardy—you would assume for this to be news something bad was about to happen. Instead it was just the opposite.

The encounter begins in typical fashion.  Mr. Ales, doing his job, gives Mr. Powers a ticket for speeding and Mr. Powers then responds with a question that Mr. Ales said “threw him for a loop.”

Mr. Powers asked the officer “how he’s handling everything and how the cops are feeling in Mississippi with all of the senseless killings this week throughout the country.” According to Mr. Powers, the cop responded with “things are tough, but we’re hanging in there and just trying to do the right thing and keep people safe…but it’s scary.” Mr. Powers then told him a lot of people were standing with law enforcement and gave Mr. Ales his bracelet, heavy with Christian symbolism including pictures of Jesus, that he said he gives to friends and family who need extra protection. It was a teary-eyed exchange.  The trooper voided the speeding ticket and Powers then gave that money to local charity, the Palmer Home For Children.

In two separate interviews with the Observer, Michael Powers and Jason Ales talk about the conversation and what this has meant to them both.

Why did you say what you said to the cop?

Mike Powers: I got that feeling that it needed to be said. How’s your day going and then we had the interaction and he said how much it meant to him. I know when we had that conversation we connected and had a bigger faith in humanity. When I handed him the bracelet we had a feeling it was meant to happen and we needed this to brighten our day. Then as he walked away he said he would void the ticket. Something was telling me that through the prayers of the night before I should ask this human being if he was okay.

What was your reaction to seeing people’s reaction on social media?

Jason Ales: I was shocked. State of shock. I was just aware of this yesterday at 4:00 or 4:30 and it had a couple hundred thousand people liking it. I wasn’t aware. I never thought something like that would happen. I wasn’t expecting that to happen. 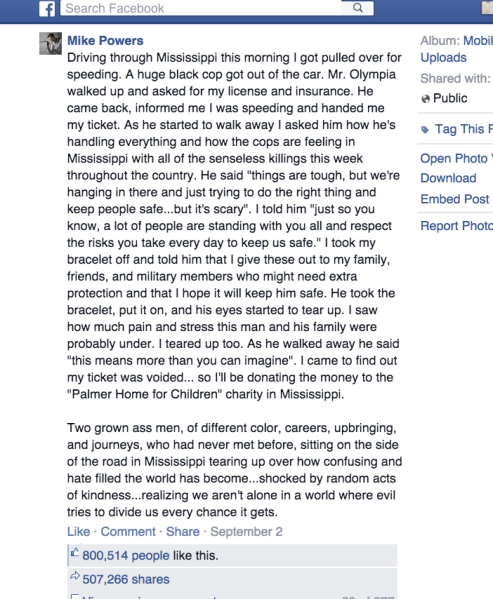 Trooper First Class Jason Ales, first, thank you for your service. What were your thoughts when Mike asked you how you were doing?

Jason Ales: When he asked me that question about our safety and asked how things were with our department and in Mississippi with all that is going on and for him to say he was praying for us and pulling for us and behind us and there are people who still love law enforcement that threw me for a loop. Even here in Mississippi  to come down here from PA to get stopped by a trooper and get a ticket he could have been cussing me or anything else. Instead he’s asking me about my safety and then out of his kindness wanted to give me a gift because he was thinking of us. That hit me so hard and humbled me and made me say let me do something for him. I couldn’t give him a ticket after he gave me this kindness I told him I’m going to go back to my car and void out the ticket right now. Nothing like that has happened before to me. I almost teared right up right there.

So I placed the bracelet by the camera on the dash and I can see the Christian like figures and be reminded of his kindness and the reason why we are here on Earth to begin with.

Mike, was Trooper Ales’ response what you were expecting?

Mike Powers: I was hoping that he would answer just like he did and engage me and talk about it. He could’ve walked away but he stopped and took a second out of his day and it was a fantastic answer from a fantastic guy.

You also released a short video in regards to the incident and the Facebook post, what’s that all about?

Mike Powers: I think it’s important that humans do good things for each other regardless of their race or religion, and I wanted to give credit to God, because I knew in my heart I begged him through prayer the night before to let us (positive people) have a voice and the next day this happens. To me it’s a sign and I wanted to give props to God. I had realized that those two things were so connected and the next day I met Trooper Ales. There’s a lot of negative stuff that can shake someone’s faith but it only takes one act of goodness to fix it.

Have you spoken to the Trooper since?

Mike Powers: We’ve been texting back and forth like best friends. He even joked and said we could meet Ellen because of this. If someone contacts me I tell them to contact him so he can get credit for what he does every day.

What did you expect people to take away from your story?

Mike Powers: I hoped people would feel as good after reading it as Jason and I did to experience it. In a world full of negative news and stories, one positive story could change someone’s day.

Did you expect the reaction on Facebook when you posted the story?

Mike Powers: No! There is no way anyone could expect that. If someone planned for that it would never happen. It was way above what I or anyone could have intended.

Where were you that you missed the original reaction on Facebook?

Jason Ales: It happened Wednesday and I didn’t find out until Thursday evening. I wasn’t aware he was trying to get a hold of me. He called the court and the police department and public affairs and they were all calling me and I was cutting grass, I didn’t have my phone. I went to go get ready to go on patrol and saw all these missed calls. I wasn’t aware what he had done. Then I started talking to him since then and he identified me at that point. People saw the Facebook Post and didn’t know it was me until after Mike identified me. He wanted to talk to me before he used my name.

Mike Powers: It feels good. The outpouring of messages I have gotten, the changes I see just make me happy. I’m grateful to see good people from all over standing together and supporting emergency responders and loving one another. Hopefully a good charity can receive the funding and attention they deserve as well.

Some people inevitably believe you have made this story up and others obviously have taken something profound from it, even if only for a minute. Why do you think so many can believe in this type of story while simultaneously so many people think it isn’t true?

Mike Powers: To be honest, I have only seen three people with negative comments. The people who thought it wasn’t real instantly had the links of the interviews sent to them and other proof. The negative was washed out with love.

There was a guy who said “this will do nothing” on Facebook. A woman replied to him “it already has” and her comment got more likes than anything else.  If we are talking one negative person to every 4,000 positive person that shows you how good the world is.

With context of the national debate going on is this type of interaction something police officers could use more of?

Jason Ales: Most definitely. With all this going on with police officers getting killed and everything else this should happen all the time. We aren’t just out here writing tickets all day. We are here to protect and serve. There is a lot more we can and should do.

This should happen way more often for law enforcement and also we should all love one another more. Everybody should be more kind. Not just the public in dealing with officers or officers dealing with the public but

people in general can be more kind and stop all the negativity.

Mike Powers: It was the Palmer Home For Children. I Googled the best charities in the city and I looked through different ones that could use it the most and the Palmer Home stood out. Their website was inspirational and I had never heard of them before, I didn’t know any charities in Mississippi and I hoped they were good and they were.

I didn’t know how the much the ticket was so I ball parked and figured it was $150. Since then Jason told me it would be in the $200 range so I have decided to donate more to a great cause.

Something like this happens very rarely for people or not at all. People are listening to you for this moment in time, what do you want to tell them?

Mike Powers: I want to tell them that things like this happen more than you think but we never get to hear about it because politicians or media realize it easier to divide us to fight against one another. But if we all love each other it’s easier to fix things together.

I went to see a friend today who is terminally ill, and told him the story.  He said “that’s what God put us here for, to build and help not to tear things down.”  I hope if people fall into the second category I hope they realize it’s never too late to turn things around and do something for somebody else.

What’s been the local reaction? 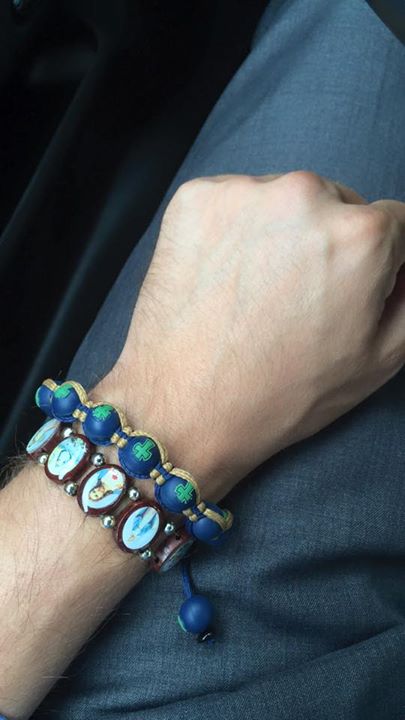