Activists affiliated with the union-backed group Hedge Clippers demanded Gov. Andrew Cuomo refund almost $1.3 million in political donations they claim he has received from wealthy investors advocating high taxes and slashed social services as a solution to the Puerto Rican debt crisis—just days before the governor is scheduled to lead a delegation of New York politicians to the island territory.

Joined by left-leaning groups like New York Communities for Change and Make the Road New York, the demonstrators outside City Hall argued that austerity measures have smashed the tiny commonwealth’s economy. The island is tottering under the burden of $70 billion in government debt—much of it in the form of tax-free bonds held by large financial interests—it insists it cannot pay back, and has implemented a drastic sales tax increase and closed schools and other public facilities to try to scrape together cash.

“We’re here because Cuomo has announced a trip to Puerto Rico to express his quote-unquote ‘solidarity,'” said David Galarza of the group Call to Action on Puerto Rico, describing the countless shuttered shopping plazas he saw on a recent trip to visit family on the island. “You can’t speak out of both sides of your mouth. You can’t claim to be in solidarity with the people of Puerto Rico, yet collect millions of dollars in campaign contributions from the same people that are hurting Puerto Rico.”

Mr. Galarza recommended that, on top of returning the money, Mr. Cuomo should visit a Puerto Rican public school where teachers and students have staged a sit-in to protest its planned closure. Liberals have blamed the crisis not on the island’s internal policies, but on federal laws that curtail the territory’s trade, inhibit its ability to collect taxes and limit its aid from Washington.

Their recommendation—echoed by several demonstrators today—has been for Congress to pass a law that would allow indebted cities and municipal entities on the island to declare bankruptcy. This power is automatically granted in the states, but Puerto Rico’s status as a commonwealth has so far left the option unavailable.

Make the Road activist Zoraida Cole recalled how a friend still living on the island had called her recently to ask for $20 after not eating for two days, unable to afford food with the increased cost of living.

“Puerto Ricans, we live in a paradise, we don’t want to leave. But we don’t have the opportunity to work and feed a family,” said Ms. Cole, who came to New York from the island 15 years ago. “Right now, the best move is that Cuomo give that money back, and show the big companies ‘I’m not willing to take that money because that is dirty money.’ If he gives an example, everybody going to follow him.”

“The governor’s commitment to the Puerto Rican government and its people speaks for itself,” Mr. Azzopardi said. 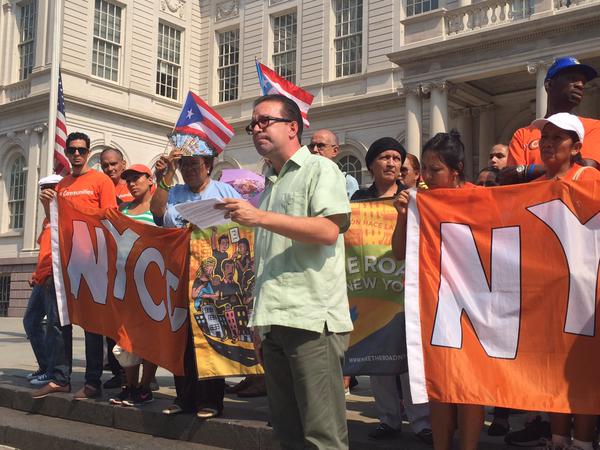