Did you know engagement rings are a scam perpetrated by the DeBeers company to get you to pay for overpriced, unexceptional earth rocks?

Well, now you do.

That’s the essential premise behind “Engagement Rings are a scam,” a 2014 video from CollegeHumor which now boasts over 6.5 million YouTube views and launched tonight’s TruTV series, Adam Ruins Everything (10 pm ET). In the video (and subsequent web series) writer, standup and Bojack Horseman voiceover artist Adam Conover casts himself as an unwanted PSA: foisting a series of hard-to-stomach truths onto an increasingly annoyed couple (played by Emily Axford and Brian Murphy, two  CollegeHumor writers).

Conover’s character is a cross between Lesley Stahl and the most annoying guy at a party; a role, Mr. Conover said, based on the type of person he fears himself to be.

“It’s the reaction I’ve gotten my whole life: that I learn something and try to tell people in conversation, but when I tell them, they are annoyed,” said Mr. Conover, who describes himself–in a bad way– as someone who reads the New Yorker religiously and listens to podcasts instead of music.

Originally, the bit about the engagement rings had started out in his standup act; incorporated from a 2007 Slate article. “But it was Jay Epstein who blew the lid off of it in The Atlantic in late 80’s,” said Conover, who, of course, knows this. “It was a well-known fact for a long time, and occasionally some writer will do a piece about how it’s still true.”

It wasn’t well-known enough to his audiences, however: Conover frequently had guests coming up to him at later shows and telling him they had done their own research and decided to not buy engagement rings, based on his set. Thus the idea of ruining everything was born.

“I was worried when I pitched this as a sketch to CollegeHumor that I’d come off as pedantic can and somewhat preachy, so I wrote Emily and Murph into sketch having a negative reaction to me,” said Mr. Conover, who began his comedic legacy in the Bard-founded comedy group, Olde English. “‘Like: this guy is so annoying.’ It was what I did in order to get ahead of what I was worried the reaction was going to be, as a self-defensive gesture.”

“Awareness of my own personality is what led to the fundamental comedy of the show,” summed up Mr. Conover.

The self-deprecation pays off: Adam Ruins could be TruTv’s Breaking Bad. Or, for a less extreme example, what Lifetime found in Unreal, Adult Swim found in 15-minute anti-comedies, and the Discovery Channel found in docu-series about jobs that are way shittier than yours: a calling card for the channel; the kind ofcontent to hang a brand on.

Previously known for its true crime content, and more recently Billy on the Street, The Carbonaro Effect and Tosh.0-style curations of painful Internet videos, TruTV is now distinguishing itself with a show that’s heavy on facts without losing any of its hilarity. Like a smug Skynet, Adam Ruins is dangerously intelligent and self-aware; unlike Skynet, its purpose is not to destroy mankind, but to make uncomfortable knowledge more easy to swallow by mixing in real experts with a satirically pompous host.

It’s almost strange that the 60 Minutes info-tainment package news genre hasn’t had its Daily Show moment yet: conceptually, it’s a little like what we all thought Review was going to be (but, in its own fantastic way, wasn’t at all.) If you can imagine what a correspondent segment on Last Week Tonight would look like, you’re halfway there.

After binging several episodes, its evident Adam Ruins moves as fast as it has to in order to keep an audience of ADHD, fact-resistant hipster millennials from realizing they are actually learning something; that is to say, “Saturday morning cartoon” fast. It’s at once totally aligned with–and the perfect antidote against– our cultural of Vice: one in which recent college graduates/drop-outs/”who needs college, anyway, DAD”-types demand that we take their cluelessly on-the-ground citizen journalism as seriously as they take themselves.

Because at its heart, Adam Ruins is trying (adroitly, I might add) to get people to focus up. “I want people to know the truth,” said Mr. Conover. “That’s what drives me. That there is truth in the world to know, and once you know it, you have a responsibility to share it.”

“I think people are better for having learned, even if they aren’t happier.”

In short, Adam Ruins Everything is the Kind Bar of TV: addictive, dense…and if it has to dump a shitload of sugar on top to help it go down easier, so be it. 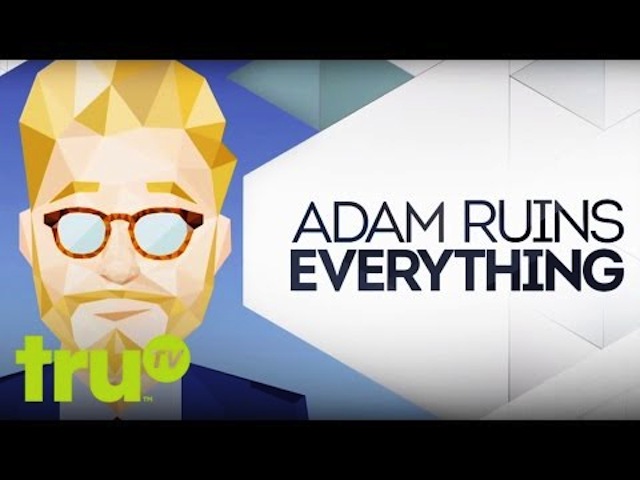