In an effort to reduce homelessness in New York City, Mayor de Blasio announced an increased spending of $12.3 million towards two programs that will provide legal counsel to families facing eviction, focusing on gentrifying areas like Bedford Stuyvesant, Crown Heights, Central and West Harlem and Bushwick. The Anti-Eviction Legal Services unit will receive $25.8 million this year, and the Anti-Harassment Tenant Protection unit will receive $20.5 million. Currently, the largest group of people in New York’s shelter system is families with children—nearly early one-third of families in shelters were recently evicted, according to a city investigation. The city has said that spending on anti-homelessness programs will grow to $61.8 million by 2017. (WNYC)

The Juilliard School is going global, collaborating with Chinese partners to open a branch in Tianjin, a port city in northern China. Singer and Chinese first lady Peng Liyuan announced the school’s new branch today at Jiulliard’s New York City campus. The Tianjin Juilliard School will offer U.S.-accredited master of music degrees in orchestral music, chamber music and collaborative piano. Expected to open in 2018, the school will also have its own permanent faculty as well as guest artists from the Manhattan campus. (The Wall Street Journal)

A woman fatally jumped from a Columbia University housing complex early this morning in Morningside Heights. The 33-year-old—whose name is being withheld until her family has been notified—gave birth just three weeks ago. According to authorities, the woman jumped out of a window at 414 W 120th Street at approximately 5:00 am, and was later rushed to St. Luke’s Hospital, where she died. Police said the woman lived in the apartment with her husband, who graduated from Columbia. (New York Post)

The Bureau of Fraud Investigation made a grave mistake when they sent a letter to Selma Cohen, saying that she had lost her Medicaid because she was dead. The 87-year-old Brooklyn resident, who is very much alive, called Medicaid upon receiving the letter and was told that it had been a computer error that would not be easily fixed. Ms. Cohen was sent to the Social Security office to apply for a state I.D. in order to prove that she is alive. The process, however, will take weeks, and without her Medicaid, Ms. Cohen cannot pay for her cancer treatment medication. Until she is reinstated, Ms. Cohen said she expects to be reimbursed for the Medicaid premium she had already paid for. (CBS News)

A tall pile driver tipped over this morning and fell onto an NYPD van at the construction site of the Virgin Hotel at W 30th Street and Broadway. Guy Chan, a photographer, said that he was walking on W 30th at about 9:00 am when he saw the pile driver fall onto the police vehicle. The van was empty, and no injuries have been reported. “It just tipped over,” Mr. Chan said. “No pedestrians were there at that moment, luckily.” The incident happened just days after the hotel began construction at the site. (Gothamist) 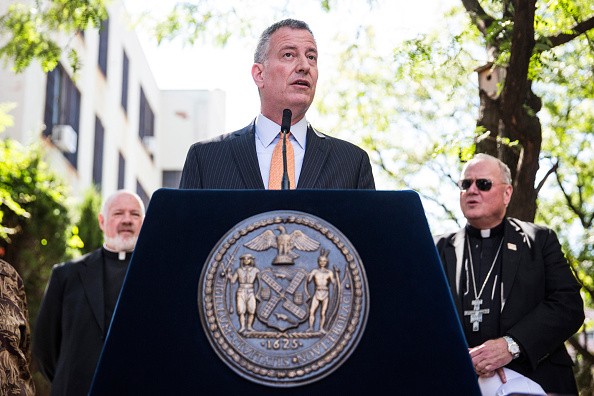