Ahmed Mohamed was thrust into the public eye this week after the Texas high schooler was arrested for bringing a homemade clock to school which teachers and cops accused of being a bomb. The story was covered by numerous U.S. news outlets, and the hashtag #IStandWithAhmed spread like wildfire on Tuesday night, as users offered messages of support ( President Obama, Hillary Clinton and Mark Zuckerberg even weighed in).

But to Mr. Mohamed’s credit, he is using all the publicity to his advantage. He started his own Twitter account Wednesday morning, thanking supporters and expressing hope that his experience would prevent future instances of racial profiling:

Thank you for your support! I really didn't think people would care about a muslim boy. #Thankyouforstandingwithme #IStandWithAhmed

Thank you fellow supporters. We can ban together to stop this racial inequality and prevent this from happening again pic.twitter.com/fBlmckoafU

Mr. Mohamed also retweeted messages of support from around the world:

Students can carry firearms at colleges in Texas but a 14 year old can't make a clock. #IStandWithAhmed http://t.co/Y1Nsjld9TC

@IStandWithAhmed please keep going and don't let the ignorance of others bring you down, I'm very proud of you and stand with you Ahmed❤️

Mr. Mohamed’s high school has not responded to the allegations of racial inequality—its only comment since the incident was in a letter to parents on Tuesday, acknowledging that “a suspicious-looking item…did not pose a threat to your child’s safety.” 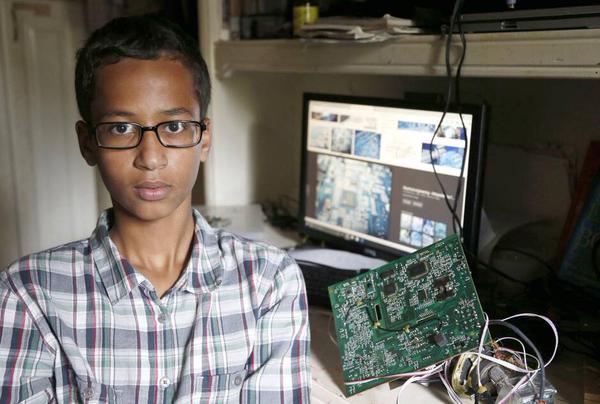