UPDATE: The Observer has discovered that the FTC has these companies on its radar as well. When we requested information regarding any investigation of these companies, the FTC said they located “approximately 70 responsive complaints” about the four of them. They shared the documents for eight of those complaints with us, and it’s clear the issues being brought to the attention of the FTC are in line with those we discovered through reviews and interviews.

Everyday, young women on Facebook are exposed to dozens of targeted ads from a handful of e-commerce clothing companies that sound too good to be true. The deals they’re promising are unbeatable—a single ad might advertise $9.99 dresses, 50 percent off your first order and free and/or 24-hour shipping. The clothes are trendy and seasonal and the price tags they’re touting are simply irresistible to the millennials seeing them day after day in between friends’ photos and status updates.

But you know what they say: If something seems too good to be true, it probably is.

While the sale prices are real, the clothes aren’t always. Go ahead and order that romper marked down by 76 percent, but it won’t be as described, won’t fit and it will take months—not 24 hours—to arrive, if it ever does at all. And then you probably won’t be able to return the garment or even contact the company.

We read hundreds of SiteJabber reviews for ROMWE, SheIn (formerly She Inside), Tobi and Rose Gal, some of the biggest sites of this nature, and spoke to real women who have used them. Put very generally, here are some of the top complaints, which apply to all of the companies:

With more than 1.5 million followers on Facebook, SheIn is one of the most popular of these sites. They’re big pushers of “expedited” and “24-hour shipping,” but their shoppers widely report that this is false advertising. Reviewers claim their orders take months to arrive, if they ever do at all. Additionally, customers are given an incorrect tracking number or no tracking number at all.

Many reviews had titles along the lines of, “MY HONEST REVIEW OF MY EXPERIENCE! I AM NOT DELETING THIS REVIEW.” This was curious, but more digging revealed what this reviewer meant: it appears that if you remove your negative review, the company will refund you. This scenario is mentioned in the above review, and another reviewer on SiteJabber wrote:

But that’s not the end of what appears to be review manipulation. There are plenty of five-star reviews (virtually none with two, three or four stars), but they all appear fake. They all use the same phrases to make the same points (a lot say they purchased “a party dress” for their wife, for example), and many are written by different user accounts with the same name and/or same picture. They’re mostly titled “Awesome!” or “Great” or “Awesome Awesome Awesome” or “Great Great Great,” and the text contains no specifics or even personality while the bad reviews are full of both—names of specific products, timelines, prices, etc. There are even reviews that say “SiteJabber” every time it should say “She Inside.”

Your clothes won’t fit, but good luck returning them

ROMWE—which has more than 719,000 followers on Facebook—has also been bombarded with accusations that both their clothes and customer service are of atrocious quality. They list much of their merchandise as final sale to avoid returns, and often offer coupon codes instead of refunds.

Review manipulation seems to be occurring here as well. The same repetitive types of five-star reviews are present (this time, often mentioning having bought a cardigan for the wife), and many reviewers have claimed the company offered to refund their money (or part of it, at least) if the customers removed their negative reviews.

Another reviewer wrote, “I received an email from Romwe (sic) the other day offering a 55 percent ‘coupon’ if I remove my review and write a ‘better’ version.”

Disappointed customers have even taken to YouTube to bash the company. This recent ROMWE rant has garnered 10,000 views. Another that mentions both ROMWE and SheIn along with a few other similar companies has be watched more than 111,000 times.

Recently, we came across someone trying to sell this outfit on Facebook, claiming to have never worn it.

We messaged the seller, Vicky Fang, a student at Rutgers University, to ask her why she was selling it because we recognized it from an ad for SheIn. She said she had actually purchased it from ROMWE, which means these companies are peddling the same clothes and could even be linked in other ways.

“It didn’t fit me when I thought it would, and it was a lot shorter than I thought. I only bought it because of the big discount I was getting,” Ms. Fang told the Observer.

We asked why she was opting to sell the garment on Facebook instead of return it.

“They had two shipments. The first shipment came right away, maybe like two days when they said one day,” Ms. Fang said. “The rest took forever to come, way longer than they said. I wanted to return but I had to pay like $5 shipping so I decided not to return since I would lose money. So I thought I’m better off selling.”

Their sales are misleading and the clothes fall apart

Basically everything discussed with the aforementioned sites applies to Tobi—which has more than 1.4 million followers on Facebook—as well. We talked to a few young woman about Tobi, all of whom complained about the sizing and/or quality of the clothes.

Victoria Trispas, 21, never dared to order from Tobi herself, but has a few friends who have. “I’ve borrowed the clothes, and they aren’t the best quality at all and actually start to fall apart eventually,” she told the Observer.

Alyssa Coamey, also 21, agreed that “sometimes they are a little cheaply made.”

Another woman had sizing issues, which seem to be one of the major problems with the company. “I’ve ordered from Tobi once, and I returned everything I got because nothing fit,” Funmi Oluwasusi, 21, told the Observer.

At least these women all received their orders. The same cannot be said for many, who have taken to review sites to share their experiences.

There isn’t strong evidence to support that Tobi is involved in review manipulation. However, the fact that most positive reviews begin “I read the reviews and was scared buying a dress” or “I was cautious but they pulled through” speaks to the reputation the company has earned as well as their quality of their product and service.

That is not to say they haven’t been deceptive, however. When Tobi offers a discount off a customer’s first order, they take the percentage off the original price instead of the sale price. But all of their advertised prices are sale prices, and they don’t make this detail of the discount clear to the buyer. (It’s not clear if they still do this, but they’ve been accused of it in the past). This is described in this negative YouTube review of Tobi, which has almost 30,000 views and also details problems with sizing and items that came cheaply made and already damaged.

Rose Gal is arguably the most popular (the company has nearly six million followers on Facebook), but it is perhaps the biggest offender. Reviews for Rose Gal are overwhelmingly terrible. On SiteJabber, the company has more than 1,300 one-star reviews.

Everything said previously regarding fit and quality definitely persists with this company. Reviewers have likened their clothes to a “dodgy table cloth,” and one said the “fabric was like pajama polyester for a 5 yr old (sic) in 1965” and that it “smelled like dead animals.” Rebecca Rivera, 21, told the Observer she liked their clothes and wanted to order Rose Gal but “feared the material/clothes would be too cheap”—good thing she didn’t.

While many, many reviewers of She In, Tobi and ROMWE claim to have never received their clothes, it seems that an truly overwhelming majority of reviewers of RoseGal have faced this issue. Nearly every reviewer mentions never receiving their order. But where they really blow, it seems, is with customer service. Again, every site we investigated had customer service issues, but the nonexistence of Rose Gal’s blew the others out of the . It seems they are actually impossible to get in touch with and have only an unmonitored voicemail account, a “live chat” that never works and a contact form that never works

The YouTube rants and many of the SiteJabber reviews mention how often the customer saw ads for the company on Facebook and claim that’s what drew them to the company. Some of the women we spoke to brought this up as well.

These customers also bring up the trendy clothes, the beautiful photos and the websites that are young, fresh and simple to navigate. And the sales, oh the sales! RoseGal, Tobi, ROMWE and She In are wooing potential customers by bombarding them with ads, telling them they have everything they want at prices they can actually afford. But they can’t deliver on any of it, in most cases, and it’s false advertising if it ever existed.

These companies are some of the most popular doing this, but they are not the only ones. There appears to be a large trend of companies of this sort using targeted Facebook ads to exploit millennial women looking for fashionable clothes at affordable prices. Many reviewers claim to have reported the companies discussed to the FTC, but the FTC has not returned our request for information regarding complaints and investigations of the companies.

All reviews are screenshots from SiteJabber.com and are representative of the company’s overall reviews and have not been cherry picked. 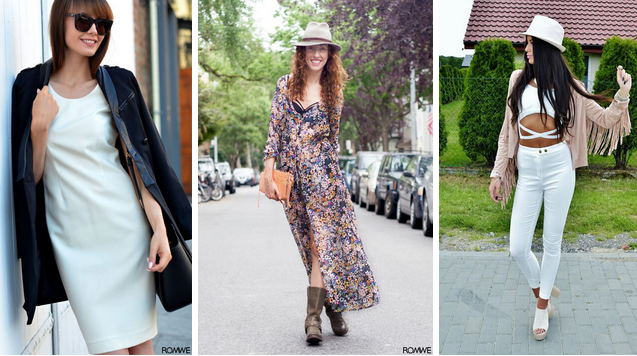