Outside the Edenworks greenhouse, the company’s guests were sampling quinoa wraps and tilapia tacos prepared by The Market’s chef, Luke Wu, the scene illuminated primarily by the setting sun. Inside, we were standing in front of a 30-gallon drum of fish waste inside a greenhouse on the roof of a metal shop in East Williamsburg, but we couldn’t smell anything untoward.

“Things that are aerobically digesting are being broken down by healthy bacteria,” Mr. Green explained. When crap smells, that’s the scent of anaerobic bacteria digesting it. Everything about Edenworks’ greenhouse is carefully designed so that the aerobic bacteria do the heavy lifting.

“That’s one aspect that keeps aquaponics from becoming a big thing, the underlying microbiology,” Mr. Green told us, while we walked from the fish tanks over to the giant drum where the facility processed the suspended solids of the greenhouse’s fish population. “Suspended solids” is a nice way of saying “floating crap,” but fish waste isn’t wasted, in an aquaponics system. It is processed so it serves as food for the plants.

For more than a year, Mr. Green has been building out the system he believes can provide fresher, better tasting food right on city rooftops. He believes technology can put people closer to their nutrition and consumers will be better off for it. He’s already selling some of his produce to local restaurants, but the harvest party last week was the company’s way of showing it to people.

Aquaponics is the practice of growing both fish and plants in a symbiotic relationship. Fish are fed and the they live in is circulated as the for plants, with nutrients that have been processed by bacteria in the providing the food for plants. The trick is only sending the digested nutrients to the plants, not the suspended solids.

“If you have solids in the bed, that feeds anaerobic bacteria. That’s decay,” Mr. Green said. The solids have to be sent to secondary treatment for further digestion before ultimately getting passed on to the plants. So nothing gets wasted.

Most of what the company is growing and selling now is different kinds of greens and fish.

Mr. Green first discussed his plan for the company with this reporter in spring 2014, when his fish tanks were still just stacked on the roof of the building while the greenhouse was being built. Now, the site is fully operational, but it was only ever meant to showcase what’s possible. “This is our R&D lab,” he said. For example, the company is growing jalapenos and tomatoes, which we got to sample at the party, but it isn’t selling those yet. The team is learning how to grow them with their system.

The company has a new facility opening up in Long Island City next year, as was first reported on Techcrunch. The new facility will be 9,000 square feet, making it roughly eleven times the footprint of the first greenhouse, twice the height but thirty times the capacity. “We’ve identified a number of shortcomings in the initial design,” Mr. Green said.

The company has also built a custom circuit board to take in data from a suite of sensors. This sends data out to their web and mobile app that helps the farmer set his or her work plan for the day at a given site.

Outside, after our personal tour, as the Observer chatted with guests, a couple of fans of urban farming pointed out some of the simple design features of the greenhouse that weren’t immediately apparent. For example, the greenhouse is oriented toward the sun to maximize solar energy. That’s fairly obvious, but then the fish tanks sit behind the plants in such a way that the is able to collect excess solar radiation and moderate the temperature in the space in a more efficient way.

Jane Jacobs famously argued in her 1970 book, The Economy of Cities, that advances in agriculture were made in cities and spread by way of cities. In an increasingly resource constrained world, there’s a certain logic to the notion that the people living closest together would have the strongest incentive to produce food in the most efficient way possible. It’s playing out with Edenworks, which contends that its system grows food with vastly less energy and than large scale farming as we know it.

We’ll need to see how the food and the logistics play out as the Edenworks system scales, but Mr. Green is confident.

Once the party was fully underway, with renderings of the facility to come projected behind him, Mr. Green made a few remarks to his guests about a vision for urban food grown close to its consumers, on city rooftops. He asked that his guests demand a food supply that doesn’t travel so far. He told the crowd, “I think if you vote with your forks the world will be a very happy place.” 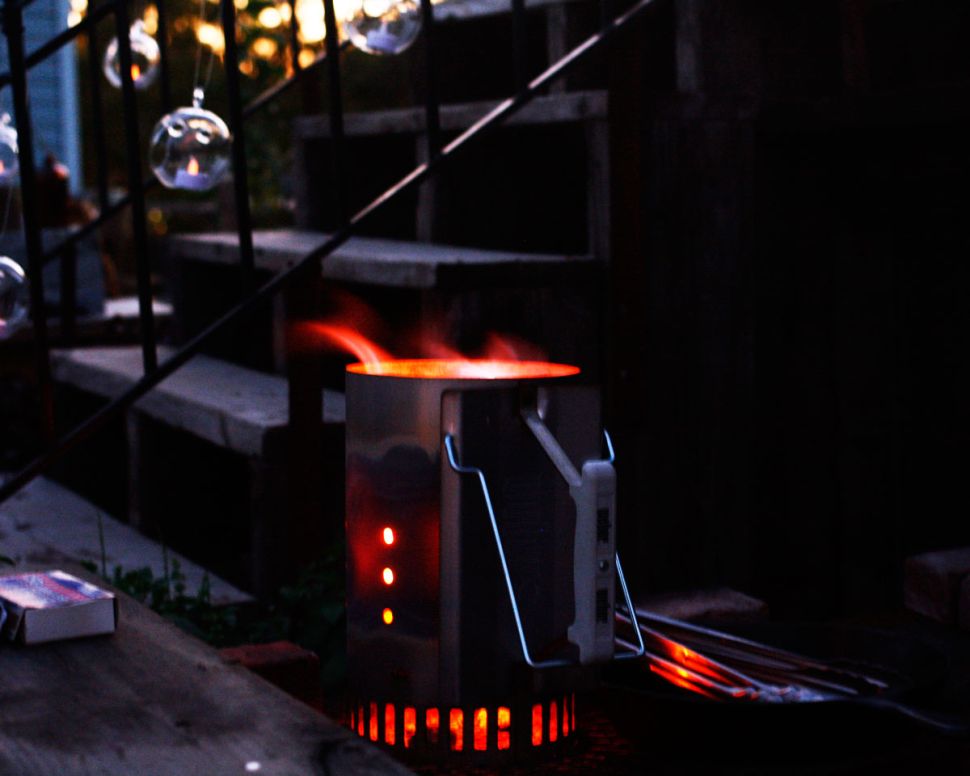