I was Donald Young’s ball boy. I tossed him balls to serve and handed him his towel. This was back when he was in his mid teens, and he was anointed the second coming of Johnny Mac. Actually, the media hyped him as the Tiger Woods of Tennis. I worked a lot of Donald’s matches. I didn’t count. Understand, I worked a lot of matches (I am a veteran ball person), and the players were forgettable – but not Donald. He wore his baseball cap crooked, an earring, and he often looked distracted. He just didn’t seem to care all that much. No, Donald didn’t fight to win his matches. He’d hit a bump, get discouraged and just quit. Donald seemed to think he should be given the championship trophy without playing. Yes, entitled. Donald had everyone rooting for him, but he was tough to root for. Heck, I didn’t even want to run after balls for him. If he wasn’t gonna try, I didn’t want to either.

Of course, Donald obviously had loads of talent. But at the Grand Slam level, everyone has that, even the players who battle it out in the qualies, the tournament before the tournament, and don’t make it into the main draw. When you work as a ball person, you observe up close how locked in these players are. You’re so darn close. They sweat on you. You can hear their heartbeat. Players who are not hyper focused and try to coast will often just get crushed.

In the semis of the U.S. Open juniors – I think that was the match – Donald was frustrated and seemed to just quit. Mayor David Dinkins was in the house. At the match’s conclusion, Donald swatted a ball out of the outer court, a lame, immature move. Back then, I doubted he would live up to the hype.

Then, at 17, Donald wound up winning the Wimbledon juniors. Perhaps there was a chance that he would the next great American champion, the one this country was aching for. Andy Roddick tasted it but never quite got there.

But Donald didn’t either.

A few years later, Young was written off as wasted talent. The great American champ, Pete Sampras, calls Young “princess” – partly in jest when they hit groundies together but a note of seriousness crept in when Young showed up late to a practice session.

But then, just as he was an afterthought, Young had a major breakthrough in 2011, reaching the U.S. Open’s fourth round, no small feat. And then, once again, he disappeared into tennis oblivion. It’s not too difficult to do that. The competition is so stiff, and there are always new hot shots coming up. If you don’t really want it, that’s where you’ll end up. Instead of quitting, Young worked on his head and worked out harder. He read self help books like football coach Tony Dungy’s Quiet Strength and rededicated himself at the gym. The game, which he always had, was still there.

In this year’s U.S. Open, Donald Young has come into his own. He’s focused, and he’s fighting. In two of his three matches, he’s come back from two sets down. In the third, he came back from a set down. In the first round, the left-hander sent No. 11 seed Gilles Simon packing after losing the first two sets 6-2 and 6-4 and being down a break in the third. Then he knocked Slovenian Aljaž Bedene out on Thursday. Yesterday, he was down two sets to none against 22 seed Viktor Troicki and in a tie-breaker in the third. He won that set and then easily dispatched Troicki in the 4th and 5th. In a startling statistic, a player who had never won a match after being down two sets had suddenly done so twice in a week—in a major tournament.

It seems that he needs to be on the brink of losing everything to finally win. Hopefully, winning will become easier for him in the future. However, I must admit that I’ve enjoyed his comebacks. Next up, the fifth ranked Stan Wawrinka, who Donald beat during his 2011 run. No doubt, the match will be nationally televised on Arthur Ashe Stadium, and the crowd will be rooting for him. These days, Donald is easy to root for, and his game is fun. He even comes to the net – old school!

After quite a journey, Donald Young is back in the spotlight. He had to be forgotten to be remembered. 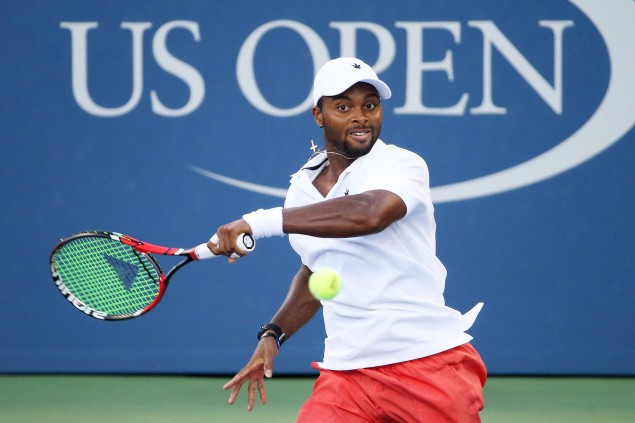