Brooklyn Assemblywoman Rodneyse Bichotte today accused the Kings County Democratic Party of spreading misinformation about State Senate candidate Samuel  Pierre‘s 2013 misdemeanor conviction and and trying to scare the Working Families Party away from endorsing him in his bid against a County-backed rival.

The freshman legislator alleged the Brooklyn establishment, led by Chairman Frank Seddio and Law Chair Frank Carone, were behind a story in the New York Post that called Mr. Pierre—who is Ms. Bichotte’s cousin—a “scam artist” and a “con man” because he pleaded guilty to taking an illegal gift in 2008 while working as a staffer to former Congressman Ed Towns. The WFP is due to decide today whether to lend its line to Mr. Pierre, a longtime Democrat, in his independent bid to defeat  Assemblywoman Roxanne Persaud in the race to replace convicted ex-State Senator John Sampson.

“At the end of the day, Sam Pierre still remains the most qualified person to represent the 19th Senatorial District. He took full responsibility for an ethics violation at the age of 23,” Ms. Bichotte said in a statement sent to the Observer. “The Brooklyn Democratic establishment should be careful before accusing others of improprieties. Glass houses shatter easily when bricks are thrown. Fortunately, Sam doesn’t live in one.”

U.S Attorney Preet Bharara accused Mr. Pierre and a radio show host of conspiring to defraud Haitian immigrants of $11,000 by offering “counseling” on their paperwork issues on-air and encouraging them to phone the host to discuss their problem. The criminal complaint noted Mr. Pierre contacted federal authorities on behalf of several people who reached out, but that the host—a childhood friend of Mr. Pierre’s—illegally pocketed thousands of dollars from the interested immigrants, some of which Mr. Bharara’s office alleged was passed along in some form to Mr. Pierre.

Mr. Pierre, then a member of former Mayor Michael Bloomberg’s Community Affairs Unit, denied knowledge of his friend’s scamming but admitted in 2013 to having taken a number of t-shirts and free dinners from the radio host while helping him with his own green card issues. Such gifts are illegal for congressional staffers, and Mr. Pierre had to pay a $5,000 fine and was sentenced to five years probation, including three years home confinement.

In the New York Post piece, Mr. Carone indicated Mr. Pierre’s misdemeanor made him ineligible to run for the State Senate seat—a claim Ms. Bichotte denied and brushed off as a ploy to deter the WFP from fielding Mr. Pierre as a candidate. (Election lawyer Jerry Goldfeder told the Observer there is only a narrow category of misdemeanors that the courts could construe as making someone ineligible for elected office. Brooklyn State Senator Kevin Parker was convicted of misdemeanor charges while in office, was not expelled, and won re-election after the charges.)

“It is sad how the Brooklyn Democratic Party establishment is working so hard to undermine the Working Families Party,” the assemblywoman said, pointing out that Mr. Seddio and the operation had been at odds with the left-leaning party in the past. “It would ill-suit the WFP to overturn its chartered Brooklyn chapter’s recommendation just to appease a Big Boss who has not stood on the WFP’s side when it comes to social justice issues.”

Ms. Bichotte is one of several emerging Caribbean-American politicians allied with Congresswoman Yvette Clarke and her mother, former councilwoman and power broker Una Clarke, who have established an operation in central Brooklyn that often butts heads with the official Democratic Party establishment.

For his part, Mr. Pierre—now 30—noted he was 23 at the time the events described in the criminal complaint transpired, and said he was unaware he was violating any law by letting his friend give him clothes and pay for his meals.

“Like everyone, I made mistakes when I began my first job out of college. One of those mistakes, unfortunately, ran contrary to congressional ethics rules, and upon learning this and speaking extensively with the federal prosecutors, I stood up and took responsibility for that mistake,” he said, adding that he would release a more detailed account of what happened in the near future. “I apologize sincerely for what mistakes I have made, but I will not let them be misstated or exaggerated. Nor will I let specious statements about my eligibility for office that are not based in any known law be the last word on my candidacy.”

The Brooklyn Democratic Party did not immediately respond to requests for comment.

The Kings County machine is generally recognized as one of the weakest in the city, controlling a shrinking share of the borough as it competes with the Clarkes and the progressive allies of the Working Families Party, as well as other factions. Its seat of power, however, is Mr. Seddio’s native neighborhood of Canarsie—which is at the heart of the Senate district Mr. Pierre aspires to represent.

Mr. Sampson, a longtime member of Mr. Seddio’s Thomas Jefferson Democratic Club and a county loyalist, was found guilty in July of lying to federal agents and of threatening to “take out” witnesses who might testify against him in a corruption probe. 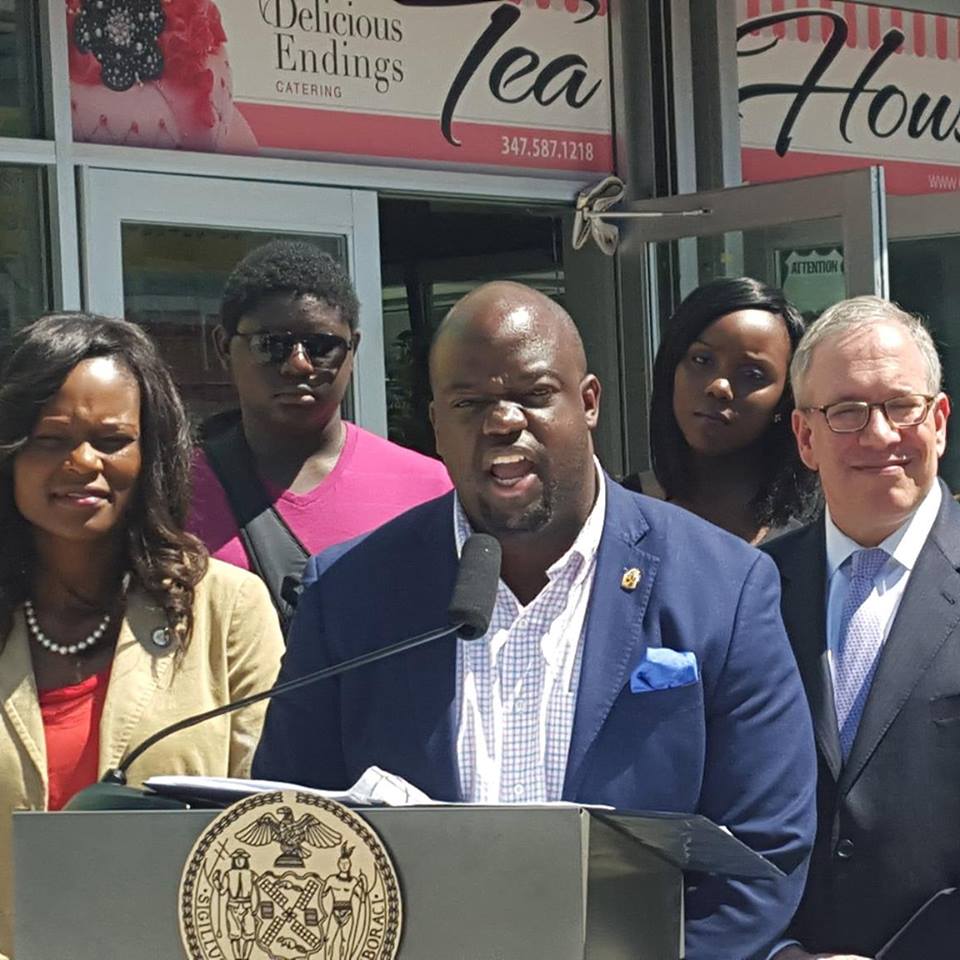