There was a burst of applause, even hoots—something he’s not used to hearing for his work—when Metropolitan Museum of Art security guard Ken Applebaum stepped down from a stage last weekend.

Mr. Applebaum had won an employee competition to perform at the Met’s second annual TEDxMet day, several hours of wide-ranging, in spots fascinating, brief talks on seemingly unrelated topics. For his part, Mr. Applebaum explained how animation, and the Japanese cartoon guardian Voltron in particular, had helped him through a childhood of taking punches from his mother’s boyfriends.Today, he noted movingly, he does not work for the institution when he protects the art; he works “for Rembrandt van Rijn, for Georgia O’Keeffe,” and for his favorite painter, Unknown.

Have you Met Ted?

At the event Saturday Sept. 26, a meld of the museum’s staff and the new-age speakers empire, there was a discussion of the perils facing Syrian antiquities, of growing up mixed-race, the next talk was on the history and evolving treatment of type 1 diabetes and another was about the art and the artist that birthed MTV. Did I forget to mention the Inuit punk throat-singing?

Hosted affably and well by Met director Thomas Campbell, the weird and, in spots, thrilling event was held in an unusual place: the Whitney Museum of American Art’s former Madison Avenue headquarters, the Marcel Breuer building. Being leased by the Met for several years, the museum will begin regular programming there in 2016 and this event was the space’s inauguration.

Ted stands for Technology, Entertainment and Design, and this particular TED talk day was a high-low smorgasbord of world music, leadership tips, a wrap-up by Isabella Rossellini wearing a hamster costume (she was discussing motherhood, and they eat their young) and heartfelt personal recollections that too often began “my father.”

The somewhat catch-all event topic this time around was “the In-Between” (2013’s more culture-centered slate was called “Icons”). It was not so much about the arts this time as their power.

One compelling Talk-er, Ricky Jackson, for example, freed through efforts of the Ohio Innocence Project last year after nearly four decades in jail, spoke of art helping you in “Believing that there is something better out there, and [that] I want to be a part of it.”

Among other highlights: Met curator Doug Eklund saluted early media artist Bruce Connor and fretted about the boom in technology and perhaps a related malaise going on in the arts: “The decline in creativity might be because of the disappearance of boredom,” he posited.

Transgender pioneer, author and reality-TV star (I Am Cait) Jenny Boylan sang a Warlocks tune and talked, with good humor, of donning a bra.

Another Met curator, Ian Alteveer, discussed “The louche glamour of living in lower Manhattan in the ’80s…” and the fascinating math of exhibiting a dwindling Felix Gonzalez-Torres pile of candy.

Especially in the wake of the Pope’s recent visit, it’s striking there was no mention of faith or spirituality. And the brevity and revolving-door nature of the presentations can give it all a Miss-America-talent-portion energy. But #TedxMet2’s highs, when they are hit, were very high. 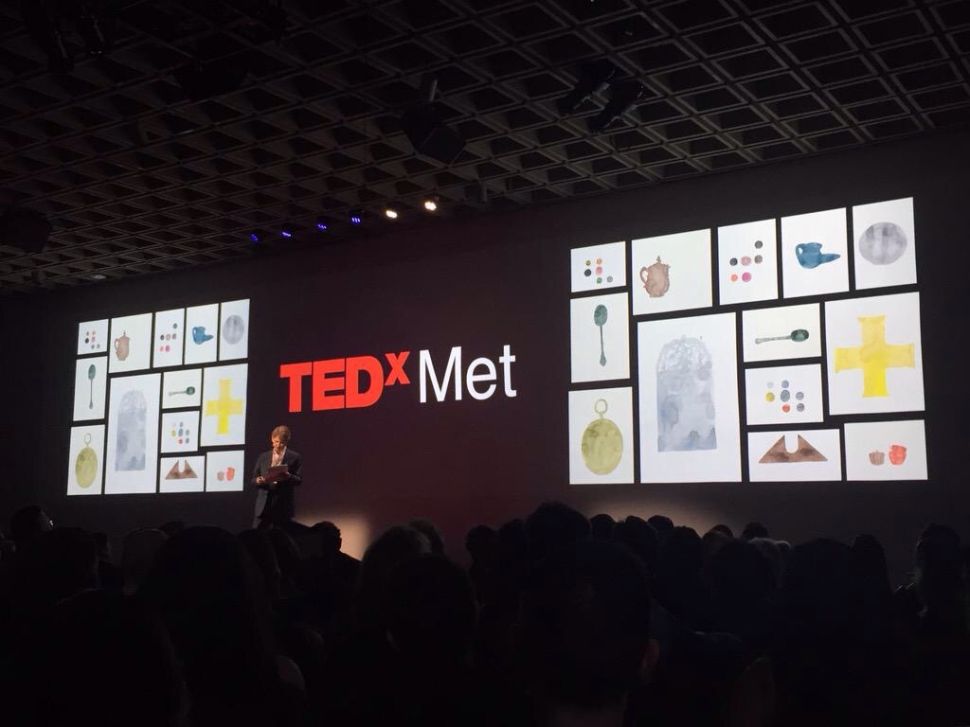