UNITED NATIONS–Underscoring the need to combat climate change around the world, Pope Francis declared at the United Nations that “any harm done to the environment” is “harm done to humanity.”

Francis, speaking in his native Spanish, stood before the General Assembly this morning, building on some of the themes he emphasized in a speech before Congress yesterday. His remarks came in advance of a major international conference on how to handle climate change.

“The ecological crisis” the Catholic leader said, “and the large-scale destruction of biodiversity, can threaten the very existence of the human species.”

Applause in the General Assembly was lighter—and more polite—than the occasionally raucous outbursts from members of Congress, and no one nearby appeared to cry like John Boehner, the speaker of the House and a devout Catholic.

In a low, steady cadence, Francis linked the destruction of the environment to economic inequality and greed. “The poorest are those who suffer most from such offenses, for three serious reasons: they are cast off by society, forced to live off what is discarded and suffer unjustly from the abuse of the environment. They are part of today’s widespread and quietly growing ‘culture of waste,’” he said.

He declared that humans must recognize a “moral law” written into “human nature itself.”

“Consequently, the defense of the environment and the fight against exclusion demand that we recognize a moral law written into human nature itself, one which includes the natural difference between man and woman, and absolute respect for life in all its stages and dimensions,” Francis said.

A pope hasn’t visited the United Nations since 2008, when Pope Benedict XVI journeyed to New York to urge a more vigorous defense of human rights around the world. 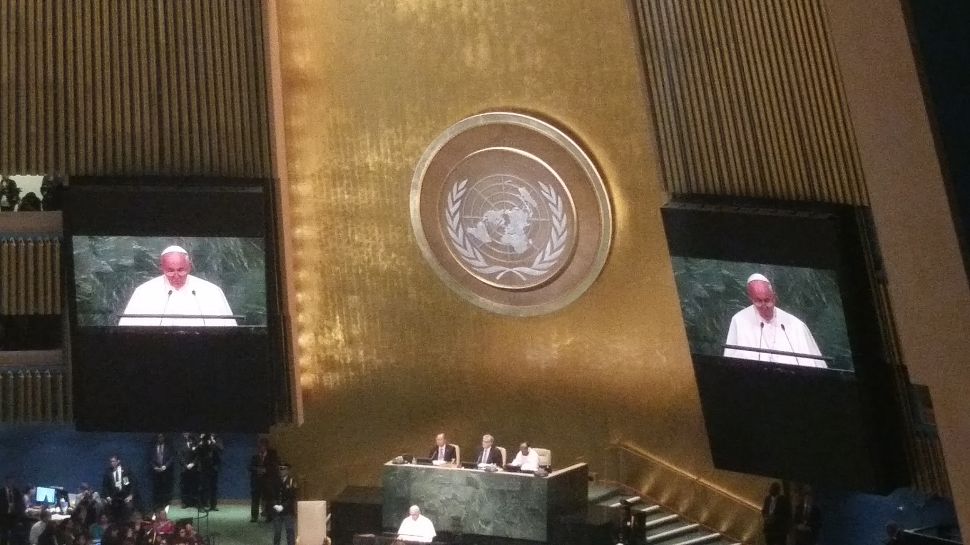