NEWARK – Mayor Ras Baraka this morning welcomed football icons Jim Brown and Ray Lewis to his city to help tackle the crisis of community violence at Summit II “Redefining Public Safety” and, amid a crisis of black on black crime, to assert the mantra that “lives matter.”

A crusader for economic and troubled youth causes going back to the mid 1960s, Brown organized the first summit with Mohammed Ali in 1967.

Both athletes responded to the call from Baraka, who spent the summer undertaking his own Newark-based anti-violence cause.

This morning, the urgent cry undertaken most passionately at the microphone by former Ravens star Lewis came in the context of the Black Lives Matter movement. “Remove the word black and say ‘lives matter,'” said Lewis, who gave a stunning testimonial born in part by the work he has done in Baltimore to try stop a tide of urban violence.

The 79-year old Brown officially named Lewis, 40, as his successor in the movement to seize hold of young lives and point them in a positive direction. Lewis decried a culture wherein many radio transmissions, movies and TV shows recklessly inject violence into the lives of young people who lack family guidance. He called on people to live by the age-old credo, “Love thy neighbor.”

Hall of Famer Brown backed up Lewis, calling him his personal choice to carry the banner for the next generation.

“This has nothing to do with making money,” said the former running back. “Either you have compassion for your community or you don’t. It’s not black on black crime. It’s really people killing other people. I would hope you would not center your response around black on black.”

While he noted that conditions for young black people are among the worst in the country in terms of lack of opportunity, lack of jobs and lack of education, he said he refused to cave in to the idea that whites are the problem. His high school coach and assistant coach guided him into the NFL, he said. 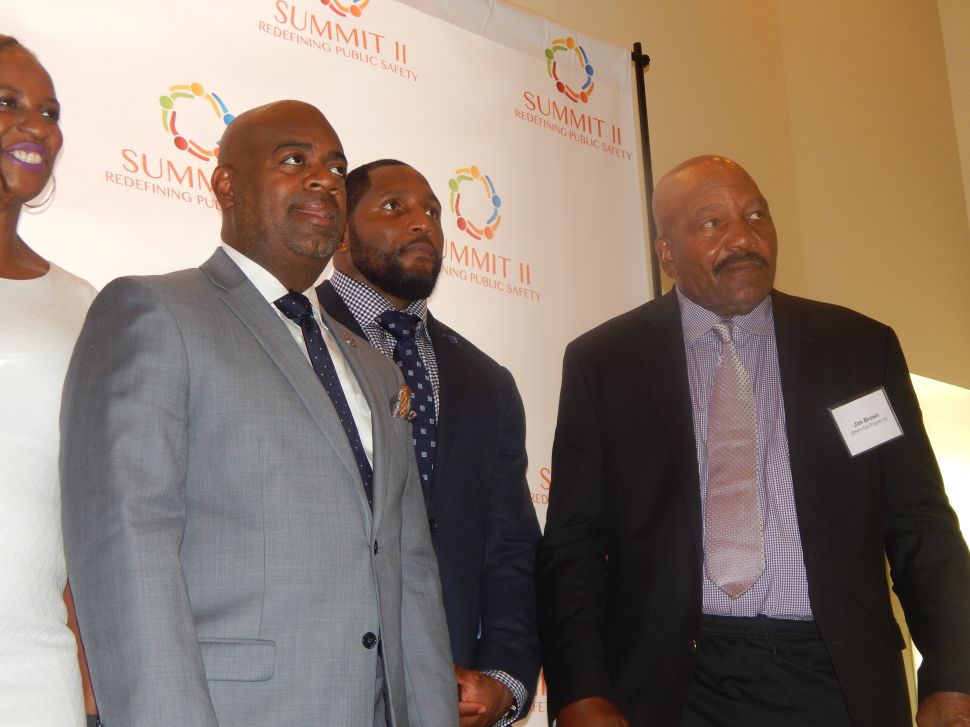