If touring a museum packed with curios such as a two-headed baby chick didn’t freak me out, then jeweler Karen Bachmann’s sordid tales of the world’s cursed gemstones did.

But Ms. Bachmann, a toughie who wears earrings made of catfish bone and a necklace of animal teeth, assured the 60 or so guests attending her talk—“Cursed Gemstones: Legend and History,” at the Morbid Anatomy Museum in Brooklyn—that it’s all just spookery anyway. She doesn’t seem to be afraid of anything, but she did concede that gemstones have power, starting her talk by asking, “Where does [it] come from? And is that power real?”(Was the two-headed chick real? I wondered.)

If you ask me, the curse of La Peregrina Pearl (a.k.a. “The Pilgrim Pearl”) sounds pretty real. The pearl, which like all pearls was to symbolize purity and virginity, ended up signifying lost love. After an African slave discovered the gigantic, pear-shaped dollop, it was handed over to Philip II of Spain. Philip II then gave it to Bloody Mary Tudor as a pre-wedding gift. Mary I loved Philip, but he didn’t love her (“I mean look at that face,” Ms. Bachmann said of Mary, undaunted by the infamous persecutor of Protestants). Four years after they married, Philip left her; when Mary soon died in 1558, the pearl was returned to Spain.

Philip next tried to pass it off to Mary’s successor, Elizabeth I, who accepted the stone but later rejected Philip’s hand in marriage. She did the decent thing of returning the pearl to him, but relations between the powers worsened, resulting in the 1588 British conquest of the Spanish Armada. After Philip died the stone was kept in the Spanish court’s hands for more than two centuries. Cut to Lord James Hamilton of England, whose estate owned it for about a century, during which it fell out of its setting twice and was lost once in the cushions of a Buckingham Palace sofa. In 1969, Richard Burton bought it for $37,000, determined to give it a home on his beloved Elizabeth Taylor’s décolletage. And we know how that love affair went. After Taylor’s death, La Peregrina was sold at auction in 2011 to an anonymous buyer for $11 million, an appreciation of a cool 29,000 percent. No one knows what’s happened to the buyer—or to La Peregrina—since.

Name your court, and a cursed gemstone has graced its crown. The Russians? Two princesses committed suicide, allegedly under the curse of the Black Orlov Diamond, after its dealer, who desecrated the stone by removing it from a Hindu idol, also committed suicide. The 195-carat wonder was cut into three separate stones in a quest to eradicate the curse, which may have worked, but Felicity Huffman wasn’t going to risk it when its current owner, jeweler J. Dennis Petimezas, offered it to her to wear at the 2006 Academy Awards (she lost anyway to Reese Witherspoon).

But the scariest stone of all is the Hope Diamond. Reputedly plucked from the eye of the goddess Sita, French gem merchant Jean Baptiste-Tavernier took the 45.52-carat blue diamond from the Golconda Mines in India. He sold it to King Louis XIV and was promptly ripped apart by a pack of wild dogs, though not even that spooks Ms. Bachmann; she insists he died of natural causes. Then Louis XIV died, before Nicolas Fouquet, a vicomte in Louis XIV’s court, owned it; he died in prison. The ill-fated Marie Antoinette wore it next. Eventually, Evalyn Walsh McLean, an American heiress, acquired it, and like Ms. Bachmann, didn’t believe in the curse, even hitching it to her dog’s collar. Then Walsh’s mother-in-law died, her 9-year-old son died, her husband cheated on her and died in an insane asylum and her 25-year-old daughter overdosed. What was left of her heirs later sold the doomed diamond to Harry Winston, who purchased it for the Smithsonian in 1949, where it has been a gentle giant ever since.

O.K., Ms. Bachmann allowed, maybe there is something to the curses. “The fact that [these gems] have wound up in the West [from the East] seems to incur a lot of resentment and anger—like, you’ve been taken from your rightful place, you don’t belong there, the idol’s been desecrated, or more appropriately, the land that it’s been taken from has been desecrated, and it should be returned.”

I mean, I’m not saying I believe in all this hocus pocus either, but just to be safe, what should a person do if she comes into a gem she thinks might be cursed? Ms. Bachmann paused. “I’d give it to someone I didn’t like.” I sure bet you would, I thought. 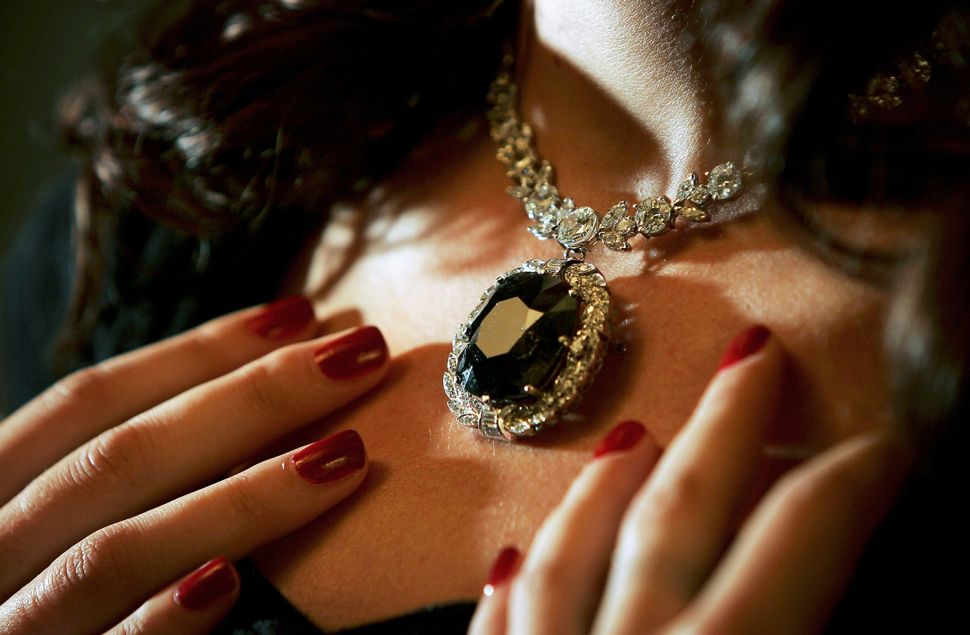