Final 6! We’re at the final 6 houseguests! Okay, so final 6 is a pretty arbitrary thing to root for. It’s basically a little bit better than final 7 and a little worse than final 5. And so many of the fan-favorites are gone. Losing James was a big one. He had a solid PR turnaround this summer, going from a creep ogler of the women houseguests to the most solid non-game entertainment on the CBS shows. I said it last week, I don’t know how they’re going to fill three hours a week of network television without James’s pranks. Maybe Austin doing flips? They haven’t really shown much of that but Austin can actually do some cool wrestling flips. I’d be down for no more than one montage of Austin doing recovery flips.

Vanessa won HOH at the end of last week after sort of but not really making a deal with Johnny Mac. I watched this on the Live Feeds and the coverage this got on the CBS show was almost longer than the competition itself. Editing is a hell of a power. I think it was the shortest endurance comp in the show’s history. Julia was eliminated before the live show even came back from commercial. Rather quickly, it was Vanessa against the four Jury members who were fighting to get back into the house. The feeds went down for like 30 seconds and next thing you know it’s just Vanessa and John. Vanessa offered Johnny Mac the deal and right before he fell off, it sounded like he screamed “okay fine, let’s do this.” Unless I misheard him, I thought they had a deal but the CBS show made it seem like they didn’t. So John came back into the house after having just been eliminated.

Vanessa nominated James and Meg for eviction. James managed to win the veto when he was the intended target. The vetos were hidden in the house and everyone playing in the competition had two minutes to go in and find one. James—who had a feeling he was on his way out, figured he didn’t want to go out without a bang so most of his turns involved TRASHING the house instead of looking for the vetos. He emptied out all the cereal boxes just because. Very solid move. James took himself off the block.

Vanessa put Julia up as a replacement. And the temptation to flip the house was there. Austin, Liz, and Julia have a three person alliance. Austin and Liz are now officially boyfriend and girlfriend. Sort of. Austin has to break up with his girlfriend outside the house. Although, according to Austin he broke up with her the second he kissed Liz. Austin and Liz have been getting some flack for their hookups inside the house. To hell with that! I am so sick of show relationships where two people have kindergarten crushes on one another, spend all day cuddling, work the game together, and then leave it in the house. Everyone can feel free to play their own game but I don’t want to hear about how much you like someone if you’re not going to commit to at least kissing them on camera. The Austin-Liz hookups have been 1) at night, 2) in the dark, 3) under the covers. If you’re scrutinizing them, you know what you are? Someone up in the middle of the night, watching night-vision camera feeds on a computer while passing judgment. Hey, I watch hours of feeds, too. So no shade thrown there. But I salute Austin and Liz for finding a way to relieve stress together in a very tense environment.

The decision was made to keep Julia, which at the time felt really bad for me as a fan. Because Meg went home. Meg was really starting to grow on me. Lit Meg was the most entertaining character of the season. Even though we didn’t get to see her as often as I’d have liked to, I get solace picturing her partying it up on the Gronk family booze cruise in a couple of months. That is the gift that will give forever. Meg was great. They called her Grandma even though she was probably one of the youngest people left in the house. If Meg didn’t finish dead-last in a competition then it was a good showing for her. She and James managed to get the wrong read in almost every situation in the house and still make it this far. If I ever see Meg out in the New York when she gets home, I will buy her a drink and cheers to Lit Meg.

This week was a double eviction. Liz won HOH, put up James and Johnny and then Julia won the veto. It was starting to look like a really dangerous idea keeping Julia. Theoretically, the two of them could just continue to the end, alternating their HOH wins and taking everyone else out. Throw in Austin to that mix and they might not lose a competition and would have control of all the votes.

Back to James, who was voted out. He gave us the greatest parting gift possible: James telling the story of how he became a dad. It is on-par with Becky’s “I Got Hit in the Face With a Train” tale. According to James, he went out one night to the bar and “had a little too much fun.” Nine months later, he got a call from the hospital that he had a daughter. So he showed up to go meet her. That was the first he heard about it. I am not making fun of that story. I am saying that is a good freaking story. And James is involved in his kid’s life and everyone’s situation is different and there is no right way to have a family, so good for James. Fantastic story, sorry to see him go.

So here we are at the Final 6. After my disappointment at seeing some of my favorites go, I realized that this is really incredible six to have left. It is going to get so dirty in there. It’s not even going to get “dirty,” it’s going to get Dirrrrty like Christina Aguilera f. Redman. All of the current people left Austin, Liz, Julia, Vanessa, Steve, John have all worked together in some capacity. They’re going to have to start cutting throats. What’s going to happen when Liz has to make a choice between Austin and Julia. One of them is going to flip out. What if Vanessa doesn’t get what she wants? She gets worked up any time something doesn’t compute in her brain. Steve knows what he’s doing, he saw the angle of flipping Julia. Johnny’s alliance to Vanessa is brand new, previous to this she was his #1 target. Is there any actual loyalty there? This is going to get so ugly. Not just “ugly” but Ugggggggly like Bubba Sparxxx f. Timbaland.

I love this show so much, always and forever. But the one request I have is to never hear the phrase “blood on my hands” ever again. “Thrown under the bus” can beat it, too. Also, “it’s just a game.” Let’s get some new terms up in here, people. Thanks.

Only 19 days to go. Three weeks and we’ll have a winner. It’s gonna be good. Sunday we’ll find out HOH and noms, Wednesday veto, live eviction next Thursday. 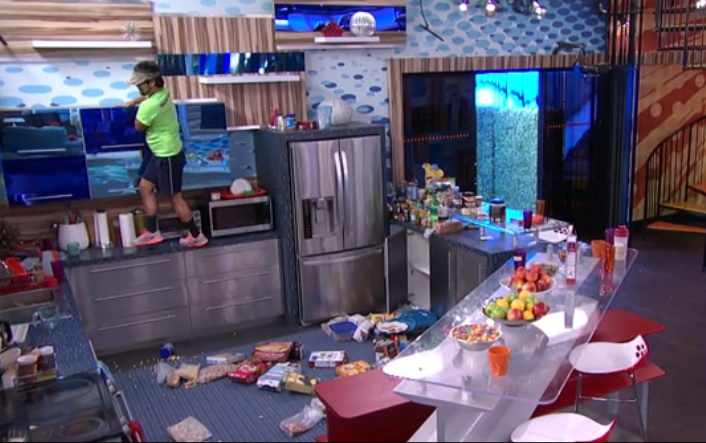