As Jeremiah Johnson, Robert Redford played the seriously weathered mountain man with a buffalo-skin coat. In All Is Lost, he took on the role of the taciturn sailor stranded at sea. But in A Walk in the Woods, the new movie he stars in based on Bill Bryson’s great book about hiking the Appalachian Trail, Mr. Redford lightens up and shows us his playful side.

Which is all the more impressive given that the Sundance Kid, who also co-produced this quirky comedy, is nearing 80 and has no reason to prove he’s up for the task of strapping on a backpack, lacing up his boots and hitting the trail. Mr. Bryson was in his 40s when he tried—and failed—to walk the nearly 2,200 miles from Georgia to Maine with his slovenly friend Stephen Katz.

The Bill Bryson Mr. Redford plays is a successful but frustrated writer with a family and a big house in New Hampshire. He’s feeling the pressure of late-life ennui, especially after he goes to a funeral early in the film. “Makes you think about slowing down,” someone tells him, to which his response is to head for the hills.

Without much reflection, and against the wishes of his loving wife, played by Emma Thompson (she is 23 years younger than her co-star, so it appears some things in Hollywood, or Utah, never change), he takes off with the only person who calls him back in his desperate search for a backpacking buddy: Yes, Katz, probably the best thing about Mr. Bryson’s book. He’s an old friend from Iowa and a moribund recovering alcoholic who often sounds like a drooling toad, played to hilarious effect by Nick Nolte, who puts his own mug shot to shame.

It’s a wonder Katz makes it 10 feet, given his corpulence, but the two hikers go relatively far, given the circumstances—and get into some trouble every once in a while. There are bears, for instance, as well as a flash snowstorm and a near-death tumble down the side of a high escarpment. Kristen Schaal makes a trail cameo as Mary Ellen, a loquacious solo hiker who criticizes their gear and won’t stop singing Daft Punk’s “Get Lucky,” out of tune.

Bryson is a tight ass while Katz is a mess who’d rather rent a Cadillac Escalade and drive along the trail than walk it. But as this brisk buddy film strides along, the two unlikely trailmates develop a warm fellow feeling.

It’s hard not to view the release of this movie as kind of opportunistically timed, given our national rediscovery of hiking. Cheryl Strayed’s Wild turned a generation of readers on to the Pacific Coast Trail, as did last year’s film adaptation starring Reese Witherspoon. (Park rangers, in fact, are bracing for an influx of backpackers heading for the Appalachian Trail after A Walk in the Woods, directed by Ken Kwapis, comes out.) Wild was appreciated, among other reasons, for its majestic shots of the California landscape, and this film certainly has its fair share of beautiful scenery as the two hikers make their way up through the South.

But the real pleasures are not to be found in the sweeping shots of the Great Smoky Mountains but in seeing how Mr. Redford and Mr. Nolte’s characters learn to get along. That’s not to say the movie, like a maple tree, leaks sap. There are moments when it slips into sentimentality, but the film has more in common with David Gordon Green’s delightful nod to Beckett, Prince Avalanche, starring Paul Rudd and Emile Hirsch as two road workers spending the summer in a Texas state park.

The two don’t make it to Maine, of course, though that doesn’t prevent Katz from declaring that they have indeed hiked the Appalachian Trail—which is true, in a way. Just not all of it. But what do they care? Like Mr. Redford and Mr. Nolte, Bryson and Katz are two men with nothing left to prove. 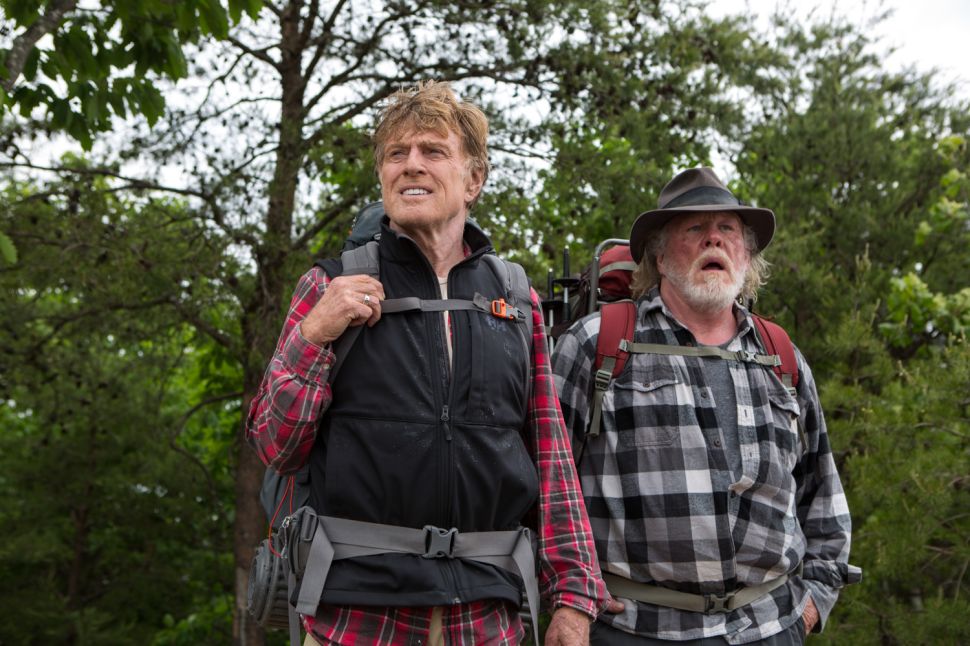