“It’s only women whose appearance would be talked about when running for President,” she said. “Never a man.”

She was responding to a question about Donald Trump, who leads in the polls. “Look at that face,” Mr. Trump was quoted in Rolling Stone as having said. “Would anyone vote for that?” Mr. Trump later said he meant her “persona,” not her face.

It was a clumsy, patronizing response, a “Mad Men” appraisal from the pre-feminist early 1960s, when goils were goils and men were men. A smarter reply would have been “I’m sorry. It was a casual, flippant remark. I apologize.”

With television the major medium of campaign communication in this 15-candidate field, physical appearance is often mocked and talked about among the 15 men she’s running against to face, possibly, Democrat Hillary Clinton in the general election of November 2016.

We hear about Chris Christie’s weight and Mr. Trump’s hair. And since this is television, take note when the camera closes in on the face of Sen. Ted Cruz. His eyes are asymmetrical, the left on a downward diagonal. Opponents could exploit that visage with freeze frames in coming ads.

And then there’s Rand Paul’s hair. Real or toupee? Mr. Trump took a gratuitous shot Wednesday. “I’ve never attacked him on his looks,” Mr. Trump said of Sen. Paul. “And, believe me, there’s plenty of subject matter there.”

Face it: In a television-driven campaign, image on TV is crucial. Mr. Trump’s television skills—polished by more than a decade of hosting “The Apprentice”—served him well in the debate’s runup. CNN showed his speech at a prime-time pep rally in a Dallas sports arena on Monday.

On Tuesday, CNN showed Mr. Trump, the loose cannon of the race, speaking before the big guns of the battleship USS Iowa.

Ignoring for the most part the fires in California, the Russian military buildup in Syria and the European refugee crisis, CNN—usually the most responsible and comprehensive of the three major cable news networks—filled its hours with pep rally hype.

Promotions featured what sounded like a boxing ring bell and an ominous drumbeat as names of candidates flashed and clashed. The buildup seemed to blend boxing or wrestling with the NCAA basketball tournament and reality TV.

Who would get voted off the island? Who would be the “Cinderella?” Who would hear Mr. Trump snarl, “You’re fired!”

For context, CNN showed clips of Presidential debates long ago, forgetting something TV producers need to remember. Back then, those camera shots didn’t accommodate a “lower third” of printed information on the bottom of the screen.

Therefore, when you leave those modern banners up, it looks as if John F. Kennedy and Richard Nixon are speaking with gags across their mouths. Please adjust. Thank you.

Another glitch came Tuesday when the screen accidentally went dark for anchor Ashleigh Banfield, already on site at the Ronald Reagan Library in California.

“Oh, we just lost our signal, unfortunately, from Simi Valley,” Ms. Banfield said. “You know what? Here’s what’s going to happen. We’re going to fix it because that is the most important site in CNN’s week”

Worse was Brooke Baldwin, all tingly. “You can feel the juice,” she said, adding “It’s almost like President Reagan is here. He’s the 12th man on the stage.” Later, she said: “It might as well be in a ring! Watch for Fireworks here on CNN!”

Charles Hurt of the Washington Times offered a less breathy assessment, aptly promising “alpha dogs” and “mud and blood and guts.” To its already cluttered and sometimes dizzying screen, CNN added a “Countdown Clock” that started ticking 48 hours before the four-candidate junior varsity event on Wednesday.

Underneath the razzmatazz, if you watched enough CNN, you could hear an anti-Trump drumbeat gaining volume as they paraded one Trump doubter after another. On Monday, commentator Dylan Byers from Politico said, “Trump is running the risk of jumping the shark,” using the “Happy Days”-inspired term for when a show goes stale.

Dr. Ben Carson aide Barry Bennett dropped by to say “I’m sure God loves Donald Trump and Ben has tried.” John Mac Stipanovich—a Republican operative allied with the Bush family and nicknamed “The Knife”—said of Trump: “At the podium next to you is Ronald McDonald.”

Next, a similar word from a higher-profile critic: Vice President Joe Biden. “One guy absolutely denigrates an entire group of people, appealing to the baser side of human nature,” Mr. Biden said, going on about “xenophobes” and the nativist “Know-Nothing” party of the 19th. Century.

When the three-hour, 11-candidate conversation ended Wednesday, some CNN commentators sounded as if they got what they wanted regarding Mr. Trump, who looked awkward when forcing “low five” handshakes with both Former Florida Governor Jeb Bush and Dr. Carson.

Cruz supporter Amanda Carpenter said of Mr. Trump “As the discussion became more substantive, he faded away. You can see a glimmer of humility.”

Kevin Madden added that Mr. Trump “took some punches tonight. He was knocked down a peg.” He compared Mr. Trump to “a boxer who’s finally bled” and said Republicans must wonder: “Do we put our boot on his neck or do we let him off?”

And Mike Rogers, the former Republican congressman from Michigan, said: “The shininess on this new toy Donald Trump came off tonight. He is not invincible.”

One more thing to mull. With all 11 candidates at their lecterns, just before the varsity debate began, host Wolf Blitzer announced a 90-second commercial break. The last commercial was a trailer for the movie “Sicaro.”

For 30 seconds, the screen was filled with a dead body, at least 14 gunshots, an explosion, a wall collapse, breaking glass, a gunfight on a busy expressway, somebody yelling “We have no jurisdiction in Mexico!” and a shot of a terrified woman’s face with blood dripping from it. 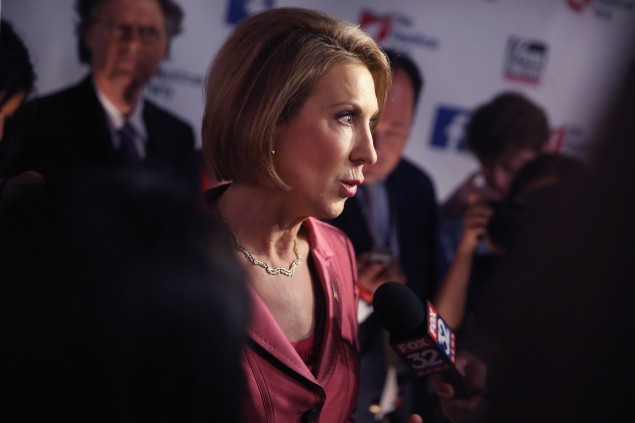