“Look at this face,” asks Carly Fiorina, in her new campaign video. “This is the face of a 61-year old woman. I am proud of every year and every wrinkle.”

It is a masterful strategy to open the campaign year as it begins this week in the second Republican debate. It could be the magic moment for Ms. Fiorina. It could bring the kind of turning that shifted the political culture to Barack Obama with the “Yes We Can” pitch in 2007.

And it might have been the face of Hillary Clinton, but Ms. Fiorina has snatched the moment from her and quite possibly from them; the others, the men who mask their real faces with hubris, egotism and stunning pretensions of grandeur. The faces that do not convey authenticity, the faces of those who take no pride in their battle scars, years and wrinkles.

And it might have been Hillary’s voice but it is not, because Ms. Clinton’s voice does not gather authority to her will. It gathers resentment. Perhaps Ms. Fiorina is everything Hillary ever wanted to be but for a simple twist of fate. Had she trusted her luck and trusted herself and not hedged her bets by tailing along instead with her famous and powerful husband. Maybe that is why in her book, Hard Choices (2014), Ms. Clinton chose a graphic cover that is a dead ringer knock-off of Ms. Fiorina’s Tough Choices (2006).

Ms. Fiorina must be endlessly flattered. But did the Clinton people think no one would notice?

Ms. Fiorina has an earthy, natural, animal power that comes through in her face, in her features, in her voice. The clip with its close-up shots of many faces, gives a sudden, positive aesthetic chill by breaking out of the mainstream, demanding all at once that the viewer find a new aesthetic appraisal of what is beauty? Who is beautiful? It is the kind of thing that stays with you and next time you will see Ms. Fiorina, which will be at the second Republican debate, the event has already been framed in the viewer’s eye and mind. Ms. Fiorina has gathered the eloquence to herself and framed it strong and true. It will be hard to beat in other media after this initiative. She has taken command.

There will be no coming forth now by Mitt Romney or any of the other patriarchal worthies to step in and snatch it from her. And Jeb Bush, opening his shirt in a Superman gesture to reveal a Reagan/Bush logo, brings the nostalgico Republicans now to embarrassment.

The nostalgicos, Clinton and Bush and the old families, in fact bring danger to America and prove us to be a nation crippled by attachment to a less than sterling the past, waiting for a second coming of Bill, of W.—even of Jack Kennedy and Reagan. Our enemies from ISIS to Vladimir Putin intuitively understand this to be what it is: weakness. An inability to move forward.

But my feeling is this: the century finally begins this week and will get its start in the second debate. Those still holding on to the past century, the past millennium, descend now into the maelstrom. And first to rise to true, natural and authentic leadership in the rising form is Mrs. Fiorina. She has taken command.

“Ladies,” she says. “Look at this face, and look at all of your faces.”

It is a masterful delivery; it is a masterful moment in campaigning: look at my face. Look at your face. Nothing connects us more personally and fundamentally to the world and brings us out of abstraction than our faces. And in this ad, my face is your face, and I, Carly, am with you. I will bring you forward because:

And they are the faces of women we know, we work with and are married to; our mothers, our neighbors, our daughters. They are women of the deeper beauty.

“Ladies,” she commands, “note to Democrat Party: We are not a special interest group. We are the majority of a nation.”

It is a stunning command performance. Ms. Fiorina has taken command. 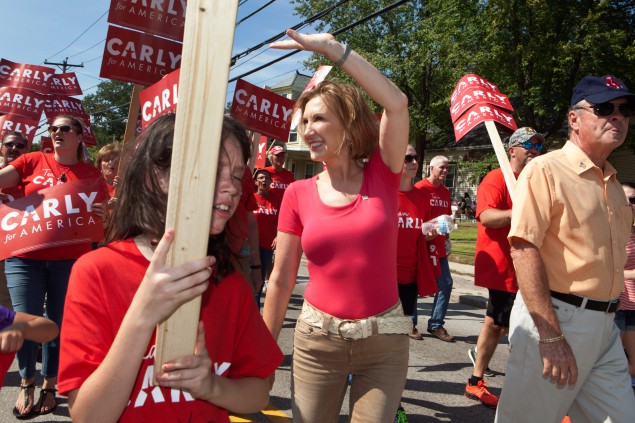