Once the 12-day staging process—Ms. Eisen was clear she never exceeds the designated 12-day time period—was complete, the Tribeca duplex that had been languishing on the market for a year was in the midst of a bidding war, and the victor emerged as no less than 007 himself—actor Daniel Craig, with an all-cash $1.9 million offer.

“You only have one chance to make a first impression, and you don’t want to miss that opportunity,” Core broker Emily Beare told the Observer. Especially in a quick-moving market with lots of liquid buyers, the spaces that put them quickly at ease are those that they are more likely to buy right away. Voilà, the ascent of home staging.

Staging—which involves arranging a home in such a way as to maximize its curb appeal—is nothing new. “The whole idea of staging really started in California, which makes sense because it’s the land of television and movies, and props and staging,” Corcoran broker Deanna Kory opined. “But the staging world has expanded. Fifteen years ago, I started staging probably before anyone else did. I had a vacant apartment in the Majestic on Central Park West, and I couldn’t sell for a price the owner wanted—she wanted $1.3 million; we kept getting $1.27 million. I told them that in California, they had this thing called staging—no one had heard about it here. I said, ‘Let me see if I can rent some furniture, and see if we can show people a sense of what it might be.’ ” Ms. Kory, who has staged many homes herself, convinced the owners to put $10,000 into staging, and “the next week, we got $1.5 million.”

Whether done by a broker with a background in staging or a certified professional stager, the process seems to reap dividends. According to Susan Goldstein, principal of home staging company SBSC Design, staged units show off their qualities more effectively. “As time went on, people saw places going into contract much faster—brokers became believers. It’s not just sellers, but brokers having a very specific idea of what they want to see in what they bring into the apartment.”

Staging is typically done before a home is listed, and television shows like Million Dollar Listing and HGTV’s Selling New York have helped brokers by “easing the groundwork” for buyers, who aren’t as taken aback these days when a broker tells them to remove their personal belongings, noted Douglas Elliman broker Ann Cutbill Lenane.

“People often feel connected to their overly decorated spaces, but television shows have helped us so much. It’s hard when people have spent a ton of money, especially when they might be a little eccentric … you have to be careful, and make sure you don’t get into an ego issue,” Ms. Lenane added.

Usually hired before a home goes on the market, or to help spruce up a listing that hasn’t sold, home stagers like Ms. Goldstein will go through a space, select what pieces (if any) can remain, and then use furniture from warehouses, rental stores, or loaned designer pieces to create an atmosphere that is appealing to the desired buyer. “First, I go in, and I take pictures. Then I come back, sit at my computer, and figure out what I need,” said Ms. Goldstein. “My assistant and I sit with my inventory [at a warehouse in Brooklyn] and decide what will work. If we need something that will have to be ordered, it could take up to two weeks before I can begin staging. If we already have a lot and can use local vendors, I can start in a week.” Once she begins staging, Ms. Goldstein said that she is usually done within three days, max.

Staging costs vary widely; if a stager is unable to use any furnishings already in the unit, the price can go up significantly. A three-month contract by Ms. Goldstein’s SBSG Design can begin as low as $9,500 for a one-bedroom and grow to more than $150,000 for more extravagant townhouses and penthouses.

Stagers can face another obstacle when a home has already been expensively decorated by an interior designer. “Staging is the antithesis of interior design, because the designer creates space just for you,” noted Sid Pinkerton of Manhattan Staging. “People who’ve spent a boatload of money are very resistant to someone coming and saying they need to change the space, but if we compromise, it might affect the final result of staging. Staging isn’t just about creating a pretty picture—it’s about showing off the attributes of an apartment in the best way possible.”

Ms. Eisen shared a similar sentiment, noting that interior designers make a home taste-specific, tailored to the client’s preferences. When it comes time to sell, however, that space will “feel like someone else’s home to a prospective buyer walking in.”

Such was the case at an apartment she worked on at 949 Park Avenue. “They had some interior designer do it, and it had paisley wallpaper. It didn’t sell for over a year. We came in and saw a few things wrong—it was so taste-specific, and there was no dining room. So we took the paisley wallpaper down, created a formal dining area in that space, and it sold immediately at full price.”

Most of Ms. Eisen’s jobs fall into the $35,000-$120,000 range, though “In staging, we do it on as low a budget as possible so our margins are good—that’s our model, that’s everyone’s model,” she said. “But it does look extravagant. People go into our stagings, and it looks like an interior designer did it.” According to Ms. Eisen, the projects she works on typically get an accepted offer within the first 30 days.

One Upper East Side townhouse Ms. Eisen worked on was a quirky mix of “weird strangeness,” including maroon walls and top hat light fixtures. It had been on the market for over a year before Fredrik Eklund got the listing. He immediately called Ms. Eisen, who “staged the whole thing—it sold completely furnished immediately after we staged it, they wanted everything. It was an Upper East Side townhouse, so we added original artwork. It looks like an art collector’s home. It sold for $13.5 million.”

Ms. Eisen has a formula when it comes to assessing properties she’s working on: “Don’t compete with the architecture. Enhance the space enough to really show off its selling features, and accessorize so it looks warm and homey.” She added her company also “assesses the demographic—an Upper East Side family will have different taste than the downtown Tribeca bachelor. We speak to that story; we tell the story of the buyer. We do so with luxury furniture and eclectic accents, which are a mix of vintage and new pieces.”

For a penthouse on Greene Street, “The Winklevoss twins saw it twice, and the second time they said, ‘forget it,’ ” Ms. Eisen recounted. The owner had done a “beautiful construction job, but it needed something else. We populated it with really unique, beautiful textural furniture. As soon as you walk in, there’s a really comfy, cozy, nutty-looking cocktail area. It was very downtown, very Greene Street bachelor pad. When the interior designer did it, it was very cold. Where there used to be art, we replaced it with mirrors. We made the living room more grand, more ‘wow!’ ”

“After we staged it, Fredrik [Eklund] called their broker. At first the broker said no, they weren’t interested. But they did come back, and they bought it immediately … My guess is that it had a personality that they identified with. I think that made a difference.”

The Winklevii must have thought so—they paid $14.5 million for the Soho triplex.

And sometimes, stagers can do their job almost too well. Ms. Lenane once had a listing where, after she staged the space, the seller decided they weren’t quite as unhappy in it as they thought. “We clean it up, we get rid of unwanted things—the ottomans, the husband’s leather recliner the wife had been wanting out—and they realize they aren’t so miserable in the apartment.”

“It’s not exactly what you want as a broker,” Ms. Lenane said. “But staging is a wonderful thing.” 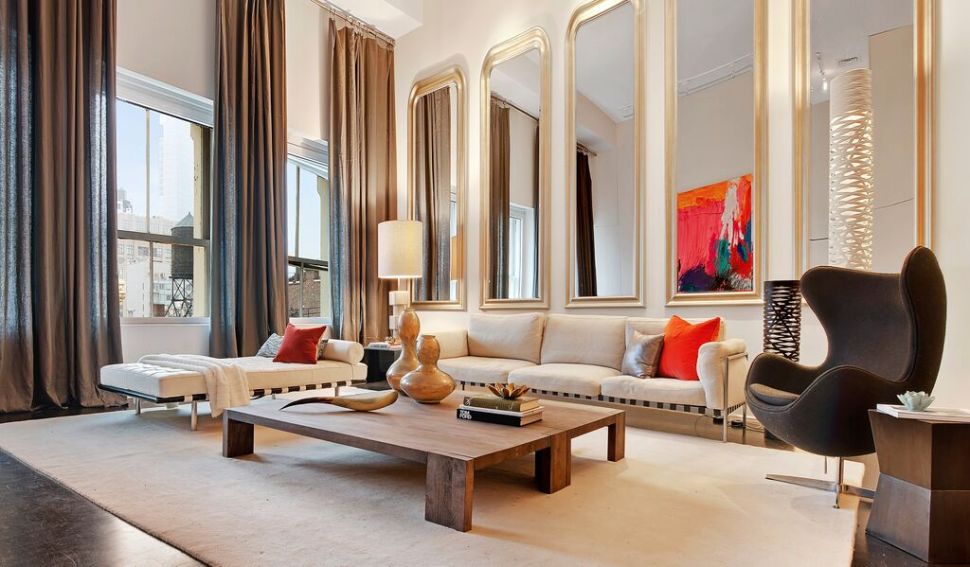