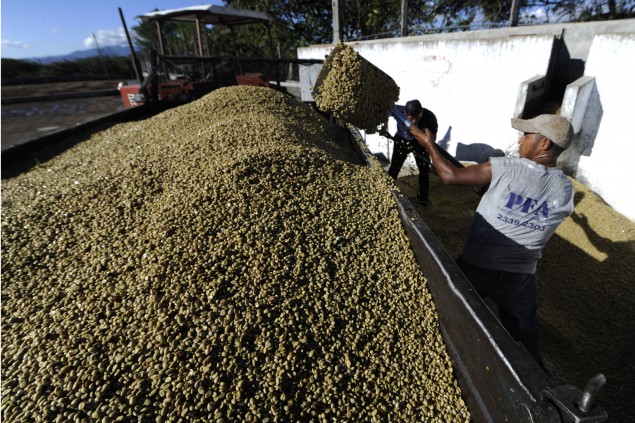 Coffee beans drying at San Victor farm in Los Verdes village near Guatemala City on January 17, 2013. Central America, one of main producers of the best Arabica Coffee, is analyzing measures to combat the Roya (Puccinia graminis) blight threatening more than one third of the crop (JOHAN ORDONEZ/AFP/Getty Images)

Coffee rust, or roya as it is known in Spanish, has been devastating coffee farmers throughout Central America for the past few years.

The rust is a fungus, Hemileia vastatrix, that infects the plants’ leaves, making them unable to absorb the sunlight they need to survive. Once the airborne fungus infects a plant, it is almost impossible to contain. The epidemic has ravaged coffee crops across Central America in the past few years, afflicting half of the one million acres of coffee planted in the region.

The disease has caused $1 billion in damage to coffee plants across Latin America and the Caribbean since 2012. USAID estimates that production will fall by as much as 15-40 percent in the next few years, with job possible job losses as high as 500,000. The decreases in production also mean decreases in incomes for small farmers, making it more difficult for them to afford the necessary maintenance to control the disease. 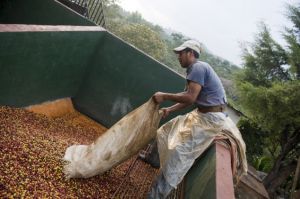 Organizations such as the Coffee Trust, based in New Mexico and Guatemala, are working with small-scale coffee farmers to improve their livelihood and establish food sovereignty in the region that has been solely dependent upon the cash crop, coffee.In the Ixil region in Guatemala, where the organization’s efforts are based, coffee production decreased from 2,500,000 lbs. of coffee in 2012 to less than 1 million lbs. in 2014. The organization has chosen to focus all their efforts in this one particular region in order to accomplish the most in a short amount of time, and leading by example for other affected regions.

“Those farmers devastated the most by roya were the ones whose soils had not been properly replenished over the years, leaving their plants particularly susceptible to disease. The immune system in the coffee plant itself is not suited to combat roya, leaving coffee plants vulnerable to the disease, and that’s why many farmers, on average lost 75% of their production, with many losing it all,” Founder and Executive Director of the Coffee Trust, William Fishbein, told the Observer. “Roya is not new, it’s been around for a while, but generally it hasn’t reached high altitudes where many of the higher quality coffee is grown because the cold temperatures have made it uninhabitable for the fungus, but with climate change increasing temperatures in the region, those high altitude coffee plants are now hospitable to the fungus, and it has been devastating to the crops.”

Chemical pesticides can be used to kill the roya, but the chemicals ruin the soil after just a few years, leaving it contaminated, forcing farmers to move their farm, and impacting nearby farmers who may not have protections from non-organic inputs in place. Probiotics for the plants called Effective Micro-Organisms (EMs) are a safer alternative being implemented on coffee farms to protect from roya. The probiotic inoculates the plants against the rust while improving soil quality and strengthening the plants.

Mr. Fishbein explains, “As complicated as roya is, the solutions for it are not that difficult to implement. Applying the EMs are not difficult to do, and a lot of cost-effective techniques to improve soil quality can be implemented. They’re relatively easy practices to learn, but the difficulty lies in convincing farmers to adapt their farming practices, especially in the Ixul region.”

From 1960 to 1996 the Ixul region in Guatemala was a brutal war zone. Half the populations was lost during a civil war rife with war crimes committed by both sides in scorched earth campaigns that killed any suspected supporters of the opposing sides. The surviving inhabitants in the region remain wary of outsiders. The Coffee Trust has leveraged the trust between farmers by embracing the methodology of Campesino-a-Campesino (farmer to farmer), the principles of which were first established in the 1980s by the non-profit organization, World Neighbors, in Guatemala and Honduras. By having farmers educate other farmers on better farming practices, the reverberations of the trainings have been spreading much more effectively throughout the region.

“Farmer dependency on coffee is the most toxic ingredient to leave them defenseless against anything that may happen in the volatile coffee trade, such as the roya epidemic,” added Mr. Fishbein. “The lack of diversity in farmers’ crop portfolio leaves them disconnected from own agricultural roots. Establishing Food sovereignty in the region is vital for the livelihood and future of the farmers in the Ixul region. Over time this deeply impoverished region that had been ravaged by a deadly civil war can recover and become example for other regions that may have not had it as bad to recover whatever they lost and improve their lives.” 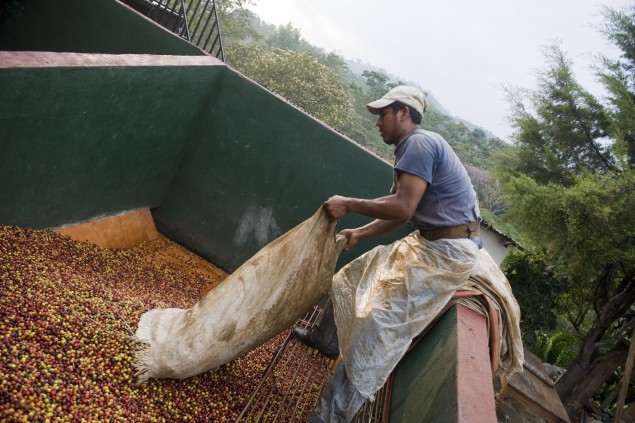