New Jersey Gov. Chris Christie, a Republican candidate for president, tore into Mayor Bill de Blasio—labeling the liberal Democrat “anti-police” and blaming him for an increase in murders in New York City in the past year.

In an appearance on Fox News’ Outnumbered, the Garden State governor seemed to describe the nine percent increase in murders since last year as a kind of comeuppance for New York voters for putting Mr. de Blasio in office after he made opposition to the NYPD policy of stop-and-frisk a centerpiece of his 2013 campaign. Mr. Christie argued that the entire vibe of the city has darkened rapidly in the 20 months since the mayor entered Gracie Mansion

“Listen, folks should not be surprised that when they elect folks like Bill de Blasio in New York City, who ran an entire campaign that was anti-police, that now we have a significant increase in crime,” he said. “But worse than that, I’m in here a lot, you all work here, you walk around the city, it’s a different feeling in the city than it was the last 20 years.”

Asked what advice he would give the mayor, Mr. Christie—whom a majority of New Jersey residents believe has abandoned the state in pursuit of his presidential ambitions according to a recent poll—argued Mr. de Blasio should back away from his campaign trail rhetoric and “do” his “job.” Mr. Christie called for him to focus on what he argued would be a more pragmatic, aggressive approach to policing. The alternative, he warned, would be letting the city backslide into the high crime rates of the 1970s and 1980s—rates he credited former Mayors Rudolph Giuliani and Michael Bloomberg with keeping down.

“What I’d say to Mayor de Blasio is ‘stop playing to the grandstand and start doing your job.’ And the first job of a mayor in a city like New York is to provide for the safety of the people who live and work here,” he said. “Mayoral leadership can make the difference. Mayor Giuliani did it, Mayor Bloomberg did it and now we’re seeing on the opposite side: lack of mayoral leadership, lack of support for the police department causes a rise in crime. And the mayor should just get to his job. He played a lot of politics to get to the job. That’s fine, now do your job.”

The presidential contender took credit for a substantial drop in crime in Camden, N.J., long regarded as one of the most dangerous cities in America. Mr. Christie said the reduced rates are a product of pro-cop policies like firing the entire police department for their “bloated union contract” and hiring an all-new force.

“While murders are going up in places like New York and Chicago and Los Angeles, they are down 61 percent in Camden because we have an effective police force that’s working with the community, and we have strong leadership at the top, the governor and the mayor, who are saying, you know, police are part of the solution, not part of the problem,” he said.

Mr. de Blasio’s office responded by again highlighting that the overall crime rate in New York is down compared to 2014 and compared to other major metropolises.

“We have record low crime and the safest summer in years. No one can deny the great success our brave men and women in uniform have had keeping NYC the safest big city in the country,” a spokesperson for the mayor told the Observer.

Polls show Mr. Christie pulling about four percent of the Republican vote nationally. He’s also struggling in polls at home, where a Monmouth University Poll found that 57 percent of voters thought he should resign his governorship due to his presidential run. 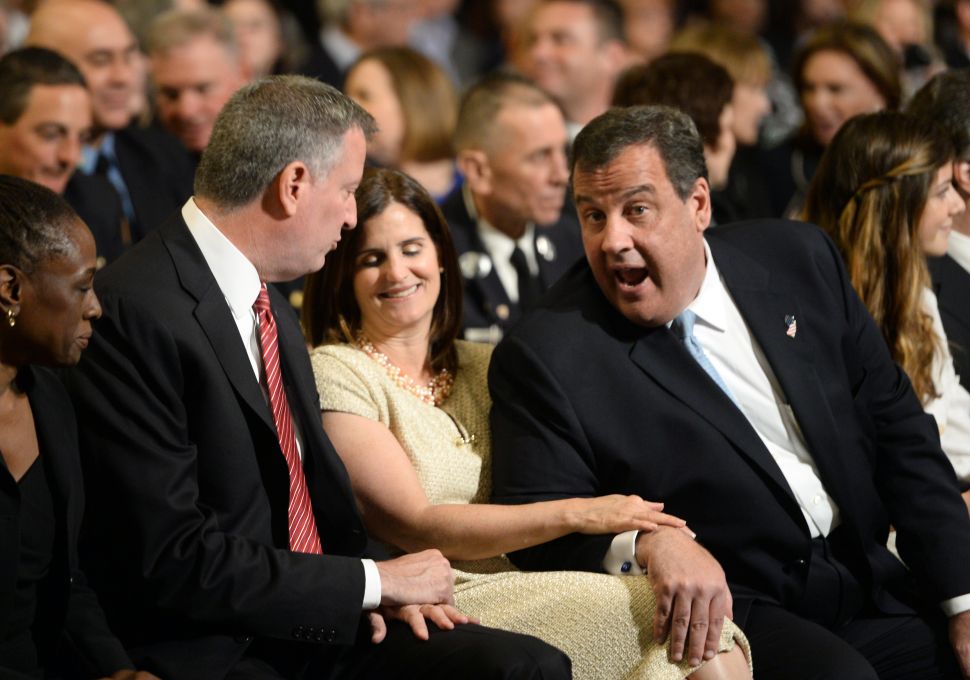