The delayed season one finale of Mr. Robot has come and gone, and the world has completely changed. And not just the world in general—although FSociety’s economy-destroying hack ensured that’s pretty damn changed, too—but every character’s each individual world.

Angela is working for Evil Corp in an attempt to bring it down from the inside, a plan that hits a speed bump when her new boss blows his brains out in front of her. Tyrell is missing, last seen with a volatile Elliot. Darlene, although elated on the surface, seems unsure of her future after a goal she set for herself was actually a success. The FSociety hack itself might not be as it seems, as we are left with the parting image of E Corp CEO Phillip Price dining comfortably with the Dark Army’s Whiterose (thumbs up for the return of B.D. Wong).

Elliot? Well, we’re not sure. During a pro-FSociety rally in Times Square, Elliot confronts Mr. Robot, the man in his head. And Mr. Robot…wins? Maybe. “You want to talk about reality?” Mr. Robot tells Elliot. “We haven’t lived in anything remotely close to it since the turn of the century.” Elliot calmly leaves the rally and returns to his apartment, where he hears a knock at the door. When he answers it, and the credits roll, we’re not sure which reality he chose to live in.

We enlisted Mr. Robot himself, Christian Slater, to help explain that ending and to get some info on Mr. Robot‘s second season. Turns out, Mr. Slater was just as excited as you were when he figured out Mr. Robot’s identity. And if you happened to pass through Times Square in the past couple of months, you may have seen a nervous Christian Slater reciting lines to himself.

Observer: Obviously at my job I hear the buzz on a new show as it builds, but what’s that been like on your end?

Christian Slater: You know, now, walking down the street I’ll get a ‘Hey Mr. Robot, how’s it going?’ People have been really excited about the show. It’s been a wonderful reaction.

Did you know from the start what your character was going to be?

I read the pilot, and for some reason I just had this sense that there is a possibility that Mr. Robot isn’t there. I said to my agent, ‘I’m not sure this guy is even there.’ And it was like, ‘Come on, that’s crazy, they would never do that on TV.’ Then I sat down with [creator Sam Esmail], [executive producer Chad Hamilton], and [pilot director Niels Arden Oplev] and I said, ‘well what is the deal with this guy?’ Sam was like, ‘do you really want to know? No, he’s not actually there.’ I threw my hands up and got very excited. I’m so glad I picked that up and we’re on the same page.

Then they told me about the relationship I would have with Elliot, which I thought was powerful and certainly added to how I would end up portraying some of the scenes. The relationship between the father and son is very unique, and very special, and I think added a deeper layer to what their situation is. I ended up walking away from that meeting very happy that I had picked up on that, and they had thought it all the way through.

How are we supposed to interpret that season finale ending? Is that Elliot accepting Mr. Robot? Rejecting him?

I think Elliot is embracing his psychosis. He’s realizing at this point in his life that whatever these demons are that he is carrying around are definitely helping him to cope with the issues he is having. It’s difficult. The fascinating thing about this show is that as much as it is about hacking, and these technical aspects, it really is this young man’s emotional journey and the hurdles he has to go through. It is dealing with the isolation and how it has manifested all these other characters in Elliot’s mind. I think it’s going to be a continual struggle for him, for as many seasons as we get to do.

Over the course of season 1, who would you say had more control—Elliot or Mr. Robot?

It’s an interesting question. It was a back and forth, tug of war, see-saw. There were definitely decisions that Elliot made that did not make Mr. Robot happy. Those were frustrating times where it was like, ‘Oh come on. Let’s blow these things up! Why are we trying to find the harder way around when we can go right for the jugular all the time?’ But I think as things progressed, and Elliot’s sanity became more and more questionable, Mr Robot gained some momentum and was able to pull the strings a little more. I think that’s going to be a back and forth struggle as we continue to build this relationship.

What specific parts of Elliot’s psyche do you think Mr. Robot represents?

I think when Elliot is scared, backed into a corner, unsure, those are the moments when Mr. Robot will step in. He will find that other part of him. Elliot is a very kind and I think thoughtful character. He has put himself in this position of having to do some unspeakable things. And I think mentally and emotionally, he’s found a way to separate himself from some of the actions he is forced to take. I think those are the moments when that other personality comes in and performs the actions Elliot is too kind to perform.

How much of that final Times Square scene was shot legitimately in Times Square? That couldn’t have been easy.

I think all of it, as far as I know, was filmed in Times Square. I read that in the script I thought, ‘oh man.’ It’s certainly a lot to say, first of all, and a lot to say in a very public place, in a very crowded place that is riddled with utter distraction and confusion. I didn’t necessarily know how I was going to mentally pull this off. I had my fears and anxieties about it.

What I ended up doing was going every day until we shot that scene. Every moment that I possibly could take, I put myself in that environment. I would go to Times Square and just recite those lines at different times of the day until I understood the location, and the environment, and would not be remotely distracted by the crowd or the phenomenal electric current passing through the place.

What’s the status on filming Season 2 at this point?

I haven’t been given a specific start date yet. I know Sam works on the episode up until the last possible second. Once [the season finale] has aired, he will then take a well-earned break, spend some time with his girlfriend, and then return in October.

Where do you see Mr. Robot fitting into season 2 now that we sort of have everything on the table?

The way Sam described it to me—because after episode 9 I did have some anxiety as to what the future of Mr. Robot was going to be—he put it very simply. He said ‘Mr. Robot is to Elliot as the Hulk is to Bruce Banner.’ Whenever Elliot is backed into a corner, or feeling confused and needs an escape and a helping hand, Mr. Robot will be there to pull the trigger. 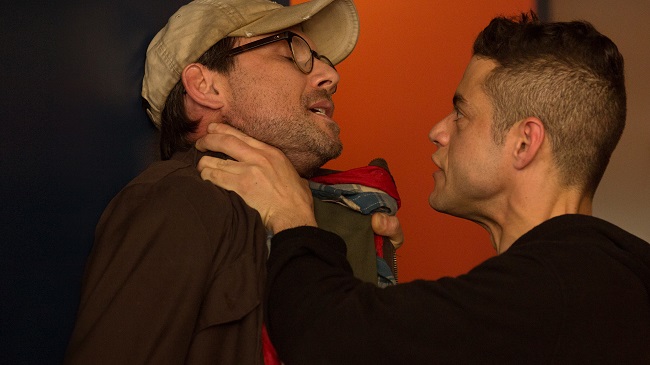