When it comes to drug policy, Governor Chris Christie is a politician of stark contradictions.  One day on the campaign trail, he’ll reaffirm his oft-stated and apparently heart-felt conviction that the Drug War is an abject policy failure.  The next day, however, the governor will double down on his vow, if elected president, to crush the growing movement among states to decriminalize, if not fully legalize, personal marijuana use and possession.

Governor Christie’s anti-cannabis stance is odd for two reasons. First, it’s unlikely to provide any traction in his sputtering pursuit of the Republican presidential nomination.  And, it certainly won’t be help him in the unlikely event he actually secures it.  According to a recent Pew Research Center survey, 53 percent of American support legalizing marijuana.  That number jumps more than ten points to 68 percent among young adults aged 18-34.

The second reason is rooted in his law enforcement background.  The governor’s tenure as a federal prosecutor led him to express unconditionally that American’s decades-long attempt to achieve total prohibition of illicit drugs by enforcing criminal laws is a catastrophic and unmitigated disaster.

Today, just as in the days of Prohibition, the law dictates drug enforcement priorities and specifies harsh penalties for those who are caught.  However, these laws are about as likely to produce a drug-free America as Prohibition was to succeed in the war on alcohol.

Why would the governor want to continue to enforce these laws, including those directed at marijuana, if doing so will inevitably lead to costly failure?  While commentators grasp this glaring paradox, it seems strangely lost on the governor.  And, given his avid support for gambling, an addictive activity linked to compulsive and destructive behavior, his motto might as well be: “roll dice, not joints.”

If an intrepid reporter were to ask the governor to reconcile the seemingly irreconcilable, I suspect his response would be two words: drug court.  The governor is nothing if not an outspoken champion of the court-supervised treatment of addicts ensnared in the criminal justice system.  It’s become his mantra.  Just this week, for example, his campaign released a television ad in New Hampshire in which he proclaims that, “The way to really win the war on drugs is to treat addicts.”

In fact, the only way to we can genuinely extricate ourselves from the failed Drug War is by ending it. How? By incrementally reducing our reliance on the criminal justice system to address a systemic problem that is fundamentally a public heath issue while promoting harm-reduction and health-oriented policy interventions in response to harmful drug use.

Drug courts were established in direct response to the Drug War and are now one of its permanent fixtures. The creation of the nation’s first drug court in Dade County Florida back in 1989 was prompted by the crack-cocaine epidemic and the tsunami of criminal drug cases that threatened to completely inundate the local court system and overwhelm the prisons with non-violent offenders.  Over the next 25 years, nearly 3,000 additional drug courts have been established across the country.

Surprisingly, the effectiveness of drug courts in reducing recidivism and lowering costs actually remains somewhat ambiguous despite the popularity of such programs according to the most objective experts.  What is clear is that the advent and proliferation of drug courts have spared and continue to spare thousands of non-violent drug offenders from imprisonment.  And, without question, many drug court participants (but by no means all) have successfully addressed and overcome their destructive reliance on illicit drugs.  On balance, than, drug courts do achieve certain important benefits given our present dependence on the criminal justice system to address the drug problem.

But it also remains a fact that drug courts provide treatment in the context of the criminal justice system.  This is especially true in New Jersey where participants are not diverted from the conventional criminal process based on their enrollment in the state’s Drug Court Program. On the contrary, enrollment occurs only after a defendant has pled guilty to an indictable offense.  In many instances, the defendant seeking enrollment is facing a mandatory and lengthy period of imprisonment.

Once admitted to the Drug Court Program, the participant is subject to an especially rigorous, treatment-centered, form of probationary supervision.  Participants are rewarded for their good conduct with various incentives and punished for clearly-defined transgressions, such as failing a drug test.  The proverbial “stick” is the leverage provided by the criminal justice system itself: infractions are routinely punished by “shock incarceration” and failure – i.e., removal from the program — inevitably results in the imposition of a state prison term.

Even those participants who successfully complete drug court remain saddled with potentially debilitating collateral consequences that apply to all defendants convicted of drug crimes in New Jersey.  In other words, they remain convicted felons with all the stigmas attached to that status.

Professor Mark Kleiman, perhaps the country’s most esteemed expert on drug policy, put it best: drug-law enforcement is unavoidably an ugly process that creates even uglier consequences: racial injustice, mass incarceration, corruption, disease, extreme levels of violence, disenfranchisement, etc.   I would venture to argue that the existence and spread of drug courts has done and can do little to mitigate these serious harms.

While drug courts present a far better option for a certain subset of offenders, they still reflect a law enforcement/criminal justice response to a vexing problem most effectively addressed as a public health issue. Put differently, the drug court concept does not represent an alternative to our current approach to illicit drugs: rather, it arose and continues to flourish in response to the crisis created by the Drug War’s emphasis on incarceration.

This is really the crux of the Christie drug policy paradox. His prescription for our failed drug policy is simply to continue to down the same path rather than embark on a genuinely transformative approach.  Moreover, the governor’s exclusive focus on court-ordered treatment as the “solution” to the Drug War seems almost calculated to deflect attention from the real, systemic problems caused by it, including aggressive enforcement strategies and draconian sentencing laws.

Ironically, Professor Kleiman identifies among several “practical approaches” to incremental drug reform the one that Christie is most vocally opposed to: the legalization of marijuana. Consider as well this remarkable fact: not once in his first or second terms has the governor called for the review, modification or repeal of any of the harsh criminal statutes on the books since 1987. It is these laws, above all is else, that embody the failure he routinely decries.

Call Governor Christie the compassionate drug warrior if you like, but a conventional drug warrior he remains.

Ben Barlyn served as a career state and county prosecutor in New Jersey for 18 years. He was also the Executive Director of the New Jersey of Commission to Review Criminal Sentencing.  In that capacity, Ben authored a lengthy report on New Jersey’s Drug Court Program.  Changes recommended by the Commission to improve that program were enacted into law in 2008.  After leaving the Commission, Ben served on the Hunterdon County Drug Court Team as an assistant prosecutor.  In 2013, he and Dr. Bruce Stout, Chair of TCNJ’s Department of Criminology, coauthored a comprehensive history of New Jersey’s experience with the Drug War published in the Albany Government Law Review.  He resides in Bucks County, Pennsylvania, with his family and four dogs. 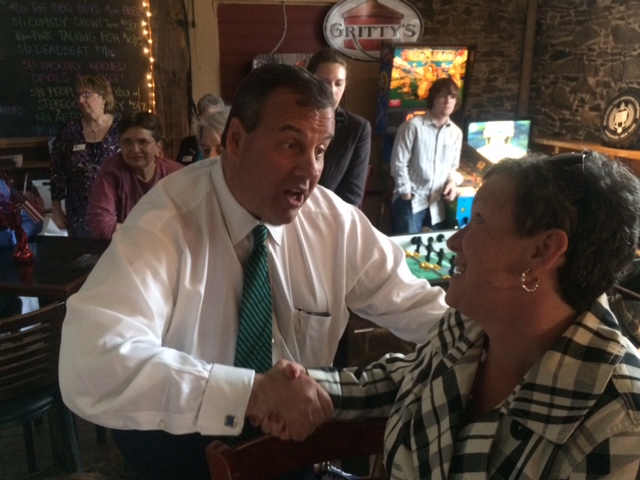