As lawmakers struggle to get synthetic marijuana off the shelves of the city’s bodegas, officials today said there’s another market for the drug that needs to be policed—the internet.

“The internet has now become a virtual bodega and a chemist’s warehouse, where all of these products that are commonly purchased by young people can now be purchased online,” State Senator Jeffrey Klein, who represents the Bronx, said today at a press conference with a slew of city and state officials.

The drug, often called K2, Spice, or legal weed, are typically sold as “incense” and are essentially a mix of herbs sprayed with synthetic cannabinoids. When smoked, the drug can cause hallucinations (and, critics say, serious side effects that absent from regular marijuana).

Mr. Klein and other lawmakers, including City Council Speaker Melissa Mark-Viverito are sending letters to online retailers eBay, Craigslist, and Backpage asking them to remove listings for the drugs. Ms. Mark-Viverito’s East Harlem district is home to a stretch of 125th Street that the New York Times profiled yesterday as ground zero for a growing K2 problem, with accounts of passed out and staggering K2 users, many of whom are homeless. Mr. Klein and others said today the drug is striking people across all ages and income levels.

“Our city streets are being taken over by zombies,” Assemblyman Mark Gjonaj said.

The move to curtail online sales comes as the city and state have struggled to get the product out of brick-and-mortar stores. In an effort to skirt bans, companies that manufacture the product often change the mix of chemicals they use to remove the ones that have been made illegal. Ms. Mark-Viverito has worked with police to hold raids and try to get the drugs off city shelves.

“It’s frustrating and we’re trying to figure it out, because it’s so complicated,” Ms. Mark-Viverito told the Observer, adding that seizing the products has helped raise awareness in the community about the illegality and danger of K2.

Current state law fines grocery stores $500 for selling synthetic marijuana, which Mr. Klein said stores can dismiss as the “cost of doing business.” He’s proposed state legislation that would hit stores with a $2,000 fine for a first offense, $5,000 fine for a second offense, and on the third offense would revoke the store’s license to sell lottery tickets, beer and cigarettes. He’s also proposed criminalizing the sale, with prison terms of five-and-a-half years for sellers caught with 16 ounces of the drug.

“I’m not looking to give another reason to give a young person a criminal background or a criminal past,” Mr. Klein said. “We need to attack it at the source and that means making sure that sellers actually can do jail time, just as if they were selling any other drug.”

Criminal penalties can only be set by the state, but the Councilmen Dan Garodnick and Ruben Wills are set to introduce a bill that will allow the city to shut down businesses selling K2 under its “nuisance abatement law.”

Lewis Cruz, a Bronx father who said his disabled son has become addicted to K2, said his son disappeared for two days while high on the drug, walking all the way to Nyack.

“It makes people hallucinate, swinging at things,” Mr. Cruz said. “He just was not himself.” 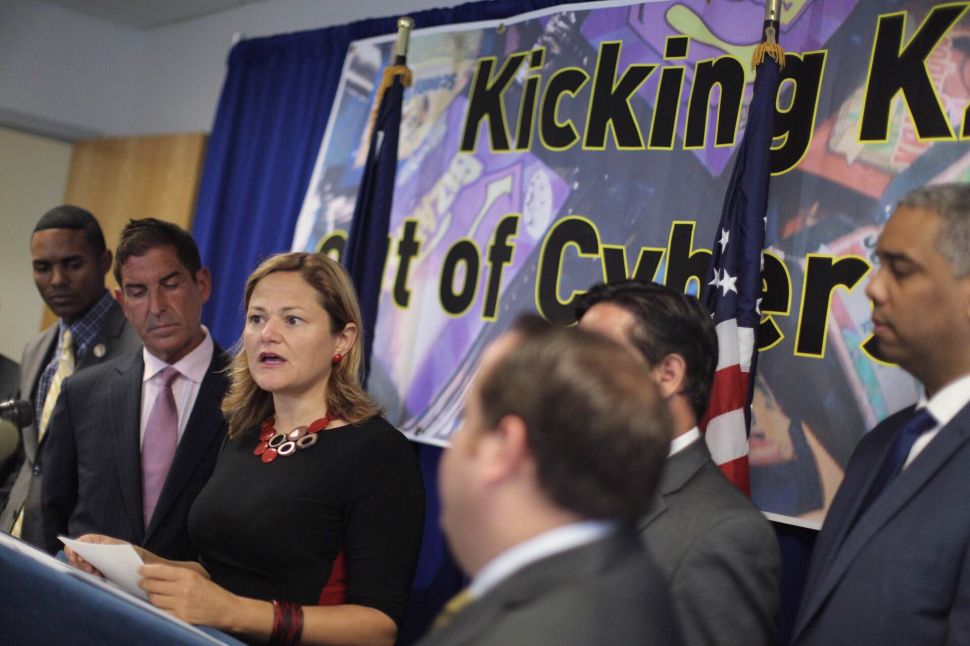