In a pivotal scene of the new medical drama Code Black, doctors, nurses, various health care workers and patients are all jammed into an emergency room that seems to be absolutely too small for all of this. There’s an inordinate amount of jostling and sustained chaos as every professional multi-tasks, including a physician who’s performing some impromptu brain surgery while coaching another doctor in the field through a tricky procedure.

While this may be a pivotal scene in this particular episode, it’s clearly not going to be an uncommon one within the framework of the series.

The term Code Black refers to any instance in which the number of patients outnumbers the available resources. In this hospital, this apparently happens quite often. Given that this series will feature this type of intensity on a regular basis, creator and Executive Producer Michael Seitzman isn’t worried that it will be too much for the audience. “You get a sense of what viewers can tolerate. They seem to be very adept and acrobatic in the way that they experience storytelling,” explains Seitzman. “We have anywhere from five to eight different patient storylines in our episodes and no one seems to lose track or get confused. In a way, I think audiences have become sort of almost insatiable in their thirst for more; more action, more storytelling, just more overall.”

Seitzman admits that he started out with a little bit lower key notion of what was going to happen in the series, but then he and his team discovered that more really is more. “I had written the part where one doctor talks the other through the procedure on the phone and then I added that that doctor would be during some surgery at the same time. Then I said, ‘hey, let’s have another doctor doing something with another patient right next to the surgery patient. Then when we were shooting it, I said, ‘let’s add another bed here, and then a 4th bed and 5th bed over there. We just kept saying, ‘let’s do more,’ and that’s how we amped it all up and got the scene that you see.”

Finding the right rhythm and feel for the show was imperative to Seitzman as he explains, “In a pilot, you’re discovering all of the facets of the series; you’re discovering the currency of the show – that thing that, aside from the storytelling, is going to make it unique and feel that much more real. We found it in an interesting way and I’m really glad we did.” Seitzman goes on to reveal that it was a surprising rehearsal that helped define the look and feel of the series. “We were running through a scene in our ER area with the full cast which includes all of our extras and the interesting thing here is that all of our extras are real nurses – we have 27 trauma nurses on staff. So, we were running the scene and we just weren’t feeling the energy that we wanted so we told all of the nurses to say whatever they would say if it were a real trauma, like if they needed an X-ray, call out for an x-ray, if they needed another IV, call out for it. We decided that we’d just fit the scene over all of that. Once we did that, it was like something switched on and the energy level just shot way up. We feel that that’s exactly how we wanted to show to feel.”

With all that intensity, Seitzman knew that he had to also keep the show believable. “I always say that the show needs to be aggressively grounded but relentlessly human,” says Seitzman. “The trick is to make it exciting and intimate at the same time. I say to all the directors, writers and editors, and this sounds counterintuitive, ‘you think that your job is to make it exciting but the environment is exciting as it is. The challenge is, how do you make it personal?’ You can look at this as a window into a world that’s different that yours, but we also have to make it a mirror so that the stories reflect back on you and you feel something.”

The overall goal of the series is to actually embed viewers into the series, explains Seitzman. “I really believe that you can make the audience a witness or a participant and I feel like our writing and shooting style goes a long way to making you feel like a participant. If you feel stressed or overwhelmed that’s part of the idea.”

Knowing that the medical genre is a bit crowded field with the veteran, Grey’s Anatomy, and the newcomer, Chicago Med, Seitzman says that this isn’t really something that concerns him. “I don’t really pay close attention to those shows. It’s like having two parties – you’re having your New Year’s Eve party and I’m having mine and I don’t really care what’s happening at yours. I just want my guests to be happy. I tend not to think about it except I want to know what’s out there. But I do think about [the series] ER because it was so good and it was a favorite of mine. My hope is that we get compared to them. I watched every season. I thought it was remarkable. I’m not trying to necessarily emulate ER, but I do try to live up to it.”

Seitzman is also keenly aware that there are innumerable choices for viewers outside the specific medial classification, but this doesn’t phase him either as he explains, “Code Black isn’t just about doctors doing their jobs, it’s about a lot more than that. Yes, it’s exciting and it doesn’t let up so if you want action, we have that, but the truth is, I think that gets people to watch the show, but I don’t think that’s why they’ll stay with it. We all showed up to The Sopranos because it was different and people were killing each other, but we stayed because Tony and Carmella were trying to make their marriage work and we cared about that. You got connected and you became concerned about these people. So we want people to show up for the intensity and then stay because you care. Show up because it’s exciting, stay because it’s emotional.”

Talking about what specifically viewers will see this season on Code Black, Seitzman says, “We have an episode where there’s a catastrophic accident and it just feels insurmountable to our people as victims just keep coming and coming. We explore the type of situation when you’re absolutely overwhelmed and not sure where to start and there are lives at sake. Then we have an episode that opens with our team in an ambulance racing to a scene and you don’t know where they’re going or what they’re going to find. When they get to the scene they have to immediately make a lot of hard decisions about how to treat people and who will live and who won’t and watching how they do that and how it affects them is really gripping.”

Seitzman says that there are two other behind-the-scenes factors that make the series work. “Part of this is pure luck, but when we cast the series, we chose people that we thought were great actors and they absolutely are, but we had no idea how great they would get along and you can’t fake that type of camaraderie on screen.

It makes it that much more real.  Trust me, when you see Marcia Gay Harden and Luis Guzman together, you’ll know see what I mean. Also, we built 30,000 square feet of hospital space for the show and it’s all functioning equipment. When you walk in it’s hard to remember that you’re on a stage on a studio lot and not in a real hospital. It’s fully outfitted to be a trauma center so if there’s a natural disaster in Los Angeles [where we shoot] we could open our doors and help out. But, let’s hope that never happens!” 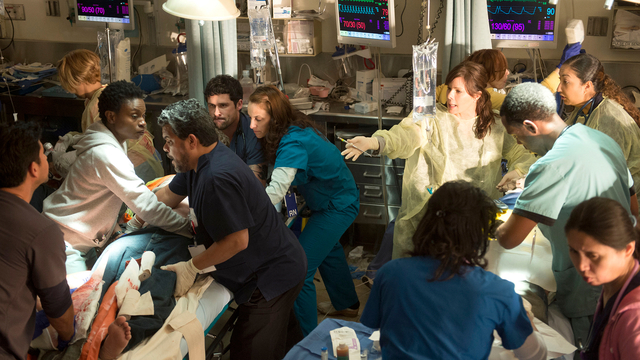