After his victory last night, Barry Grodenchik is well-positioned to replace Mark Weprin in the City Council and not a whole lot will probably change.

Mr. Weprin and the Queens Democratic Party endorsed Mr. Grodenchik, a former assemblyman and longtime staffer in the Queens borough president’s office. Mr. Grodenchik and Mr. Weprin are aligned on just about every issue, moderate Democrats from corners of eastern Queens where Mayor Bill de Blasio’s liberalism is outright resented.

Mr. Grodenchik campaigned doggedly, if quietly, running under the campaign slogan “Experience Matters.” He is an ex-lobbyist deeply familiar with government. To allies, his long resume of public and private sector work is proof enough that he deserved to win.

To detractors, he is a colorless loyalist of the county organization who will take marching orders from Congressman Joseph Crowley, the Queens Democratic chairman, and do little else. Before becoming an assemblyman, Mr. Grodenchik in 2001 ran unsuccessfully with the county organization’s support for a neighboring City Council district. Two years ago, he abruptly dropped out of a race for Queens borough president when Mr. Crowley favored another Democrat.

He is affable and unlikely to make waves. Unlike Bob Friedrich, a prominent civic leader in the area, he is not fiercely opposed to City Hall and should emulate Mr. Weprin’s collegiality in a 51-member body that is often dominated by Brooklyn and Manhattan liberals.

For Mr. Crowley and Queens County, a reliable vote in the next council speaker’s race was not lost. Had Rebecca Lynch or Ali Najmi, two proud progressives, won the primary, the Council’s 19-member Progressive Caucus could have grown its ranks to 20.

On Twitter at least, the elected official most fired up about Mr. Grodenchik’s win was a Manhattanite: Councilman Dan Garodnick, a Democrat who fought hard with Mr. Crowley’s backing to become the next speaker in 2013. Melissa Mark-Viverito, with the liberal establishment’s support, triumphed, but Mr. Garodnick seemed to imply Mr. Grodenchik’s victory represented some kind of rebuke of their movement.

“Congrats @BarryGrodenchik on big win. Looking forward to working with you. #CommonSenseCaucus,” Mr. Garodnick tweeted. He included two Brooklyn Democrats, David Greenfield and Mark Treyger, in his tweet. Mr. Greenfield, the chairman of the Council’s land use committee, is one of the more conservative Democrats in the body.

When the Observer pressed Mr. Grodenchik last night on whether he thought his convincing win over Ms. Lynch, a former de Blasio administration staffer who ran with the backing of the progressive establishment, meant the district had repudiated the mayor, Mr. Grodenchik demurred.

“I want to work with the mayor, work with all my colleagues,” he said. “My only ideology is the needs of the people of this district.”

Ms. Lynch, despite her raft of endorsements and potent campaign infrastructure, finished third behind Mr. Friedrich. Queens insiders offered several reasons for Ms. Lynch’s disappointing finish, including her relative youth (Mr. Grodenchik is 55, Ms. Lynch is 27), her ties to an unpopular mayor and even her failure to emphasize her Jewish heritage in a district with a significant Jewish population. (Mr. Grodenchik was not shy about touting his religion.)

Mr. Grodenchik may have ended up being the candidate who best fit the suburban and unfussy district, where older white voters still hold sway in elections. He supports adding more cops to the NYPD, even after Mr. de Blasio approved an increase of 1,300. He wants tax cuts for co-op and condo owners. Unlike Mr. Friedrich, the leader of a large co-op, he was able to broaden his base beyond the co-op world, thanks to a sophisticated and aggressive get-out-the-vote effort.

The labor-backed Working Families Party, which is known for their ground game and supported Ms. Lynch, tipped its cap to Mr. Grodenchik. For the party, it was a tough loss after they spearheaded a surprising victory in a contested Brooklyn Assembly race earlier this year.

“Barry’s a good guy but we’re disappointed,” said Bill Lipton, WFP’s New York State director. “Different things might have happened where it could’ve been a different outcome, perhaps. I definitely feel like a progressive can win in eastern Queens; the dynamics of the race were very complex.”

There were more bitter feelings from supporters of the South Asian candidates who ran in the six-way primary. Though whites like Mr. Grodenchik constitute the largest ethnic group among registered Democrats, the area is home to large Latino, black and Asian populations, and boasts booming Pakistani, Indian, Muslim, Hindu and Sikh enclaves. The three candidates of South Asian descent–Celia Dosamantes, Ali Najmi and Satnam Singh Parhar–combined for 1,968 votes, which exceeded Mr. Grodenchik’s total of 1,856, according to unofficial Board of Elections returns.

It’s not clear that a single South Asian candidate could have united the voters who backed the three Democrats, however. Internal rivalries, rooted in religious and ethnic diversity, have long ensured that the South Asian vote is not monolithic.

“You have different ethnicities, different religions and different economic statuses within the community. A South Asian candidate must reach across serious cultural boundaries,” said Doug Forand, a senior partner with Red Horse Strategies, the consulting firm advising Mr. Grodenchik. He added that South Asian turnout overall was “higher than normal” and credited both Mr. Parhar and Mr. Najmi.

This isn’t the first time that Mr. Grodenchik, with the Queens Democratic Party’s blessing, has frustrated an emerging minority group. In 2002, he won an Assembly race in a heavily Asian district in Flushing, Queens, defeating a crowded field of Chinese and Indian candidates. Two years later, a Chinese businessman named Jimmy Meng unseated him. (His daughter, Grace Meng, would eventually replace him in the Assembly and now serves in Congress. Though typically aligned with the county organization, she declined to endorse Mr. Grodenchik.)

If Mr. Grodenchik defeats a Republican candidate in November as expected, he will face re-election in 2017. But his odds of winning then will be much greater than they were in 2004.

This story has been corrected to reflect that Ms. Meng did not endorse Mr. Grodenchik. It originally stated she did. 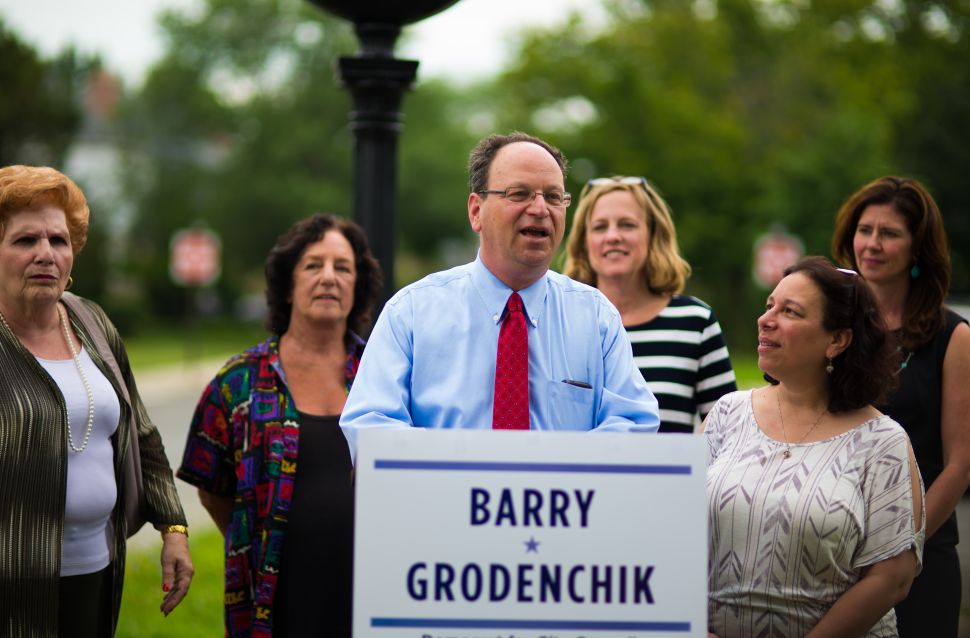