Senator Cory Booker may have been counting on the traditions of the Jewish High Holy Days to give him cover for his support of the Iran deal. It will not be forthcoming.

The junior senator from New Jersey is now maneuvering like the tightend he once was at Stanford, scrambling to explain his JCPOA vote to Jewish leaders throughout the state and beyond. Not only is it unconvincing, Mr. Booker’s protestations only underscore the weakness—indeed the illogic—of his position and the perfidiousness of his betrayal.

The betrayal is not just of his constituents—who are overwhelmingly opposed to the deal—but of his ideals. Mr. Booker claims he is distrustful of the Iranians and concerned that the release of billions of dollars of frozen funds and the lifting of sanctions will be funneled to Iranian terrorists and their proxies. And yet he throws up his hands, shrugs his shoulders, and says it’s the best we could do.

Shame on him. That is not why New Jersey voters sent him to Washington.

This isn’t about patting the heads of Jewish donors whose feelings are hurt. This is about the existential threat to the world’s one Jewish state.

They elected him because they believed he brought a keen intellect and personal courage to challenges that demanded both. They hoped he would have the fortitude to cross the political aisle and forge principled partnerships. This announced intention to vote in favor of the JCPOA is the antithesis of both. To read his 3,400-word explanation of his position is an Alice-through-the-looking-glass experience: the arguments he makes overwhelmingly lead to the opposite conclusion.

One can only wonder what the White House threatened him with or promised him.

Mr. Booker thinks his problems are with the Jewish community, and he is desperately trying to arrange meetings in which he ostensibly wants to explore what measures can be enacted to limit the damage Iran can do in light of the influx of funds and the already announced acquisition of advanced Russian weapons. The senator is being blatantly disingenuous. Mr. Booker doesn’t want to discuss remedial legislation; he wants political cover.

It will not be forthcoming.

This was Mr. Booker’s first real test as a United States senator. He has failed it.

Ultimately, the shortcomings we are witnessing in Mr. Booker are the same ones that residents of Newark experienced firsthand during his two terms as mayor. It is not enough to inspire with one’s words. Leadership requires action. Courage. Backbone.

As a spellbinding orator with a knack for rescuing freezing cats and hungry neighbors, Cory Booker was the first politician to become a Twitter celebrity. But 140 charm-filled characters failed to address the stubborn persistence of failing schools, crumbling infrastructure, sky-high crime and chronic unemployment.

This page has been very friendly to Mr. Booker in the past, noting the intractability of the social ills that have plagued Newark for generations. But as other mayors who tweet less have accomplished more—from Steven Fulop in a business-friendly Jersey City that’s poised to become the state’s largest city, to Mr. Booker’s replacement in Newark, Ras Baraka, who is quietly accomplishing many of the things Mr. Booker only noisily promised—we wonder if we too weren’t among those who thought they knew Mr. Booker, only to discover he wasn’t who we thought he was.

That’s politics for you. We realize that those who want a friend in Washington are best advised to get a dog. But this isn’t about patting the heads of Jewish donors whose feelings are hurt. This is about the existential threat to the world’s one Jewish state, a state whose destruction is the official policy of the regime Mr. Booker just agreed to fund with $150 billion and an “inspection protocol” that gives the inspected 30 days notice and allows them to conduct portions of the inspection themselves.

This is the regime that Cory Booker has chosen to back. No amount of rhetoric, no number of Yiddish sayings peppering his remarks, can change that fact. Cory Booker has let down his state, his deepest supporters and ultimately, the civilized world. In so doing he has become what we never imagined—just another politician. 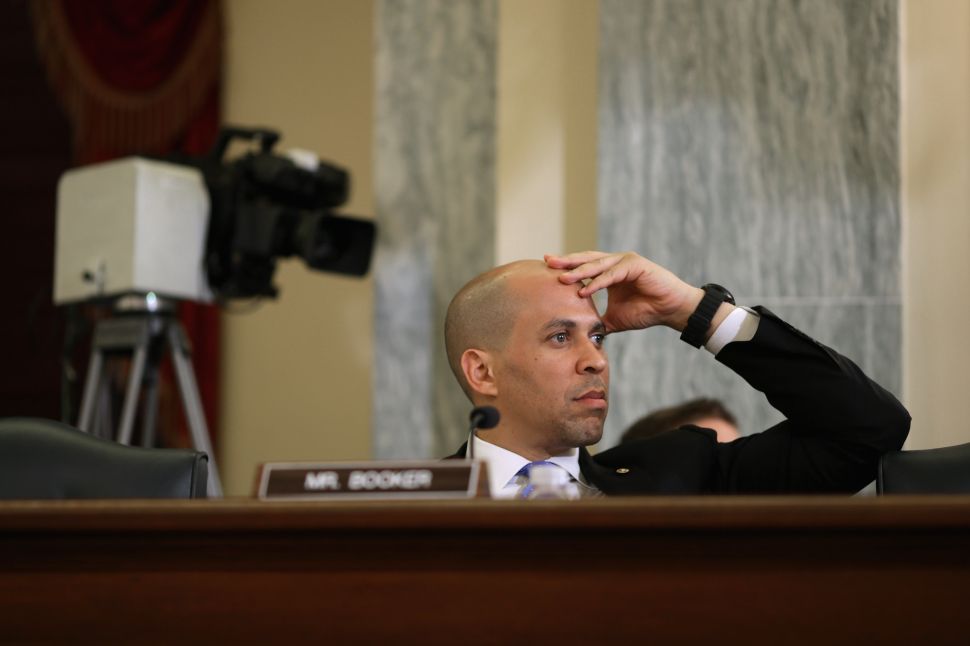