Earlier this month, New York quietly marked the 14th anniversary of the destruction of the World Trade Center, and as that epochal event fades into history–how curious it is that 9/11 marked the first year of the 21st century—so too does the immediacy of the trauma.

Almost instantly the disaster was translated into art, that is to say, into soapy cliché, via Oliver Stone’s 2006 World Trade Center, for instance, and “literary fiction” by a whole roster of popular authors (Jonathan Safran Foer, Jay McInerney, Don DeLillo and so many more that “The Daily Beast” regularly invites writers to compile listicles about the subgenre).

These pop chronicles do have it tough; they must spend thousands and thousands of words to tell a story that in the end is certain to be little more than a shallow reflection of a complex reality we already know too well. Not to mention that any story about 9/11 is bound to be laden with schmaltz, which as anyone will tell you is not good for the heart.

Visual artists have it easier, as their works can almost magically become icons, somehow absorbing profound significance from the psyches of their viewers. Complex meaning clings to otherwise straightforward artworks like gum sticks to the bottom of your shoe. When Ellsworth Kelly suggested that the Ground Zero Memorial be a vast parklike square of green grass, he gave us an image that couldn’t help but resonate, as it seemed to turn away from the awful clash of civilizations in favor of a pastoral declaration of peace.

Similarly, an aura of timeless mourning attached to the deeply shadowed and sober portraits in Philip-Lorca diCorcia’s photographic series “Heads,” which was on view at PaceWildenstein in Chelsea during that September and October—pictures that initially been only surreptitious flash snapshots of preoccupied pedestrians in Times Square.

The wreckage at Ground Zero had barely stopped smoking before plans were set in motion to build on the site again. It’s a commonplace: no sooner does one epoch come to a tragic end than a new one begins its ominous rise. At Ground Zero, the symbolism is stark, as a destroyed “world trade center” has been replaced  by an architectural emblem of Fortress America. The so-called Freedom Tower, as yet barely tenanted, now commands the New York City skyline with an ominous authority.

First to mark this new era, to look forward rather than back, is the New York artist Enoc Perez, whose exhibition of new paintings at Peter Blum Gallery on West 57th Street takes as its subject the Freedom Tower, or “One World Trade Center,” as the building is formally known.

“I thought it was time,” said Perez, who has been for a while known for evocative and simple images of classical modernist buildings. A series of ten vertical paintings, measuring 80 by 60 inches each and done with thick paint in primary colors on a silver ground, ring the large open space like Stations of the Cross. It is a series, with each picture being a variation on a single image.

Perez suggests the uncertainties of our communal future by using a triple, overlapping image of the tower, as if seen with eyes that can’t quite focus. The triplicate image on silver—a spattered and clotted field, evocative of a building site that once was ashes, as Perez notes—is an easy reference to Warhol’s Elvis paintings, not to mention his eight-hour-long film Empire, both ready emblems of the world domination of U.S. pop culture.

The coming century promises to be even cooler and tougher, if that is imaginable. One World Trade Center itself is famously reinforced, an armored tumescence that rises to a geometrically blunt tip, a shape that is lethal but curiously undistinguished, like a truncheon or a cattle prod.

Where the artist’s older works look back retrospectively at the architectural triumphs of the 20th century, embodying a kind of dream image of the modernist utopia, his new paintings look forward. They remind us that we are in the 21st century, an era overshadowed by an increasingly dystopian American sovereignty. It’s painting as a blunt instrument, as unthinking and brutally powerful as the country itself. 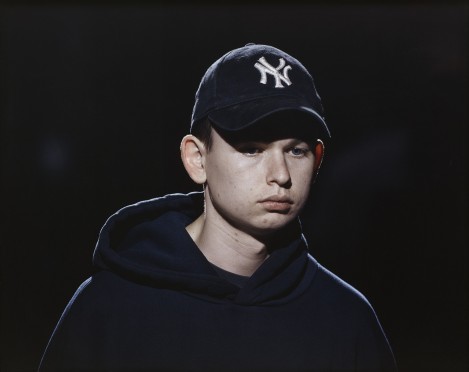