Asked about the funding for programs to combat the scourge, Mr. Cuomo said, “I think the city should spend more—I think it’s an investment—and I’m prepared to spend more.”

Mr. de Blasio—who has repeatedly asked the state to spend more on homelessness—spoke at length about the issue yesterday on WNYC’s Brian Lehrer Show. Throughout the summer, Mr. de Blasio has more than once argued that the number of homeless people hasn’t been rising, insisting the media coverage of street homelessness was disproportionate to the actual problem. Yesterday, the mayor shifted his tone, saying, “I think there is both a perception and a reality problem.”

The NYPD outlined plans to bring a “comprehensive strategy” to the issue, with a goal of providing outreach to people at more than 80 different spots identified as homeless encampments. Police Commissioner Bill Bratton today said the street homeless—those resistant to services offered to them, such as shelter—are more visible in the summer time. But while he’s noticed an increase himself since moving to New York in 2009, he insisted the problem was worse in other cities and did not happen overnight here.

“That population has grown steadily over the last 15 to 20 years, and it’s reached a tipping point, however, I think, to use that term. They did become more visible over this summer,” Mr. Bratton said.

Local media, the New York Post in particular, have seized on the issue as an indication that quality of life in the city was suffering. Mr. Cuomo seemed to echo that thought today—saying that homelessness was “wrong on an ethical, moral level,” but also a threat to the city.

“New York was not always this vibrant and this tourist-friendly and this clean and this safe,” Mr. Cuomo said. “So that is the main asset for the city right now, and homelessness is one of those issues that begins to effect that.”

But for all Mr. Cuomo’s concern about this issue today, many—including current city officials—have pointed to his office as part of the problem. In 2011, former Mayor Michael Bloomberg and Mr. Cuomo cut entirely a program called Advantage, which provided rental assistance to the homeless. That, the de Blasio administration and others have argued, is when the population in homeless shelters began to surge. It has since been reinstated under Mr. de Blasio, with the state paying a smaller amount of the cost.

An aide to Mr. Cuomo said the homeless population had not fallen under the Advantage program and the mayor’s office at the time made the argument that the program was not working—so the state decided to spend the $68 million it was using on Advantage elsewhere for homeless services, arguing it was a “failed experiment.” The aide noted new investment focuses more on preventing people from getting into shelters by doing things like doubling rent subsidies for those facing eviction.

Asked about the Advantage cuts, Mr. Cuomo insisted he did not believe the homelessness problem stemmed from inadequate state funding.

“The state has invested heavily over the past five years—we have over a billion dollars in housing and related programs, so it’s not a question of state resources. And if it were, the state is there to be responsive,” Mr. Cuomo said. “I don’t believe that’s what it is.”

But he city has routinely painted the issue as a matter of state budget cuts—and has said the city is already paying more than it used to in order to deal with homelessness. Most recently, the city and state have squabbled over the creation of supportive housing units through the NY/NY program, which links the formerly homeless with mental health services, in this year’s budget.

The city asked for the creation of 12,000 units over 10 years; the state has offered 3,900 units over seven years, which the city says is insufficient. Mr. Cuomo today told the Observer that he’d “advocated for more NY/NY,” but wanted the city to pick up more of the tab—50 percent, instead of the 20 percent the city currently pays.

The mayor’s office said paying 50 percent of the NY/NY program would cost the city an additional $40 million annually, and said the number of units on the table wasn’t enough.

“The State is going backwards in its support of New York City’s homeless—especially those that are mentally ill—and the latest example is its unacceptable proposal of 3,900 units of supportive housing over the next 7 years,” de Blasio spokeswoman Ishanee Parikh said. “We’ve consistently increased funding to make up for gaps left by State cuts, and we need the State to increase the number of units of supportive housing for mentally ill New Yorkers in need.”

But the Cuomo aide argued the city was in better financial shape than the state—New York City has been operating with large budget surpluses under Mr. de Blasio—and that if the city wants more units, that’s more reason to pay half the price. “If they come to the table with a 50 percent contribution, simple math tells you you’re going to be able to do more units,” the Cuomo aide said.

The city pointed to a state cap of $9 million for rental assistance to HIV/AIDS patients, leaving the city to pick up the majority of the $38 million tab; a 10 percent contribution requirement from the city for emergency assistance to families, something not required of any other locality; and a decrease in state funding for adult shelters, with state money at one time covering half the cost of the city’s shelters but now amounting to only $69 million, less than one-fifth of the cost.

A report issued by the Coalition for the Homeless in March explicitly asked Mr. Cuomo to step up, reading in part, “There is no question that Governor Cuomo can and must do more.”

“We can’t just have the small, 3,900 unit agreement the governor’s pushing,” Patrick Markee, the Coalition’s Deputy Executive Director for Advocacy, said of the governor’s NY/NY proposal. “That doesn’t even come close to addressing the need.”

“Governor Cuomo is correct there’s a homeless problem, but it isn’t just a New York City issue, it is a statewide issue as well,” Douglas Cooper, associate executive director of Association for Community Living/ACLAIMH and a member of the of the Campaign 4 NY/NY Housing, said in a statement. “Supportive Housing has proven results in getting people off the street long-term and helping them address their mental and physical health needs. We are hopeful that he will sit down with the Mayor and other stakeholders to come to an agreement on how to fund the 35,000 supportive care units necessary to meaningfully address this issue now.”

The population of New Yorkers in homeless shelters was already growing fast before Mr. de Blasio took office. The shelter population rose precipitously during Mr. Bloomberg’s tenure, from 31,063 in 2001 to 53,173 in December 2013, according to city shelter censuses. That figure has continued to rise under Mr. de Blasio, to a high of 60,939 in January 2015, before falling down to 58,270 this June. From 2011, when Advantage was cut, to today, the shelter population has increased more than 18,000 people.

(The population of New Yorkers living on the streets is considerably smaller than the unsheltered population, and fluctuated before falling slightly under Mr. Bloomberg’s tenure.)

This story has been updated with comments from the Campaign 4 NY/NY and the Cuomo administration. 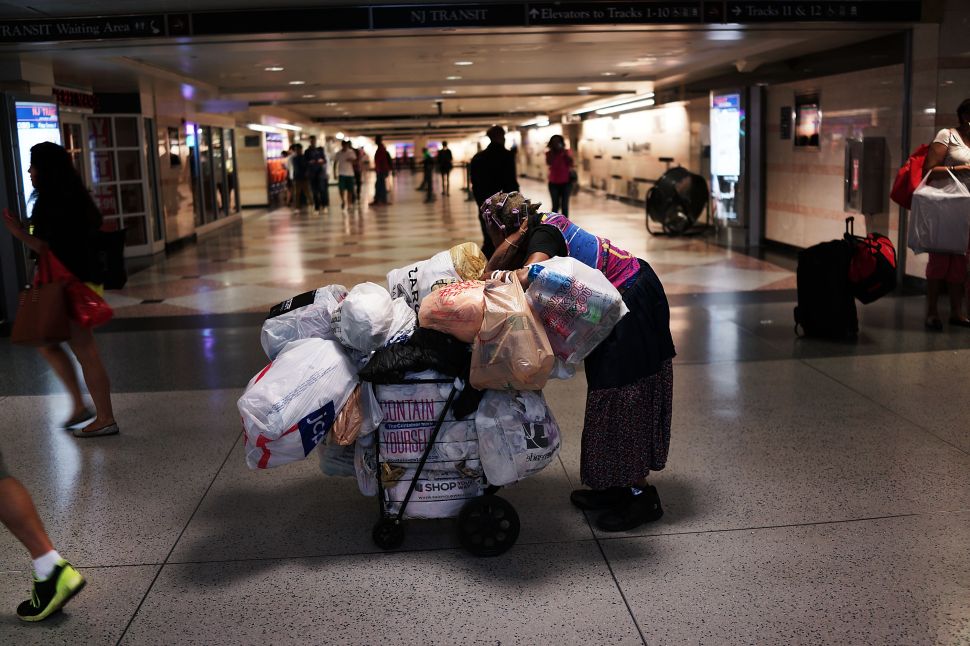