“The bottom line is this, we have to share this city, so be considerate and treat everyone with respect,” Mr. de Blasio during a bit on Late Night With Seth Meyers. “In other words pull your heads out of your asses.”

In Mr. de Blasio’s appearance on the comedy show—the latest in a media blitz this week—the mayor was perhaps channeling a little bit of New York’s most famously outspoken mayor, Ed Koch. Intended to look like an official message from the mayor’s office, Mr. de Blasio sat behind a desk on set on bashed the kind of people who drive everyday New Yorkers nuts—like those too busy looking at their phones to keep walking.

“This isn’t downtown Wichita, it’s New York City. People need to get where they’re going,” Mr. de Blasio cracked. “The last thing they want is some oblivious ding-dong standing at the top of the subway stairs watching Transformers 3 on their cell phone.”

Mr. de Blasio’s turn as sketch comedian came as he sought to hit the airwaves to promote his agenda in recent weeks—with appearances on MSNBC, CNN, and local news channel Pix 11 all just this week. A few hours before Late Night aired, NY1’s Inside City Hall aired a wide-ranging sit-down with Mr. de Blasio. (Unlike Late Night, the NY1 appearance did not feature the mayor calling anyone a moron.) Mr. de Blasio has also held extensive radio interviews in recent weeks.

Not all the press has been good. A Vanity Fair profile released this week asserted Mr. de Blasio, whose approval rating started off middling and has only sagged since, does not “possess either charisma or gravitas,” lacking the personalities of his favorite mayors, Fiorello La Guardia and Mr. Koch, and coming off as more of a wallflower than either of those giant personalities. Railing against the universal annoyances of the sidewalks and the subways might be one way to tap into that New York character city residents like to see in their mayors—the kind of man it seems fitting to refer to with the tabloid shorthand Hizzoner.

If nothing else, surely Mr. de Blasio’s position on pregnant subway riders would poll well.

“I swear to God, if I see another standing pregnant woman in the subway because no one gave up their seat I’m going to rip their arms off,” Mr. de Blasio faux-fumed. “And I can do it too, I’m like eight feet tall! Seriously, just try me hombre!”

Mr. de Blasio’s also sat down for an interview with Mr. Meyers, in which the late-night host tried to bait the mayor into making a presidential endorsement (it didn’t work) and confronted Mr. de Blasio with a clip that showed him heaping praise on Times Square’s Naked Cowboy—despite his recent assertions that nobody (especially women) ought be topless in Times Square.

“That was a kinder, gentler time,” Mr. de Blasio said.

You can watch the mayor’s bit about sidewalk and subway etiquette below: 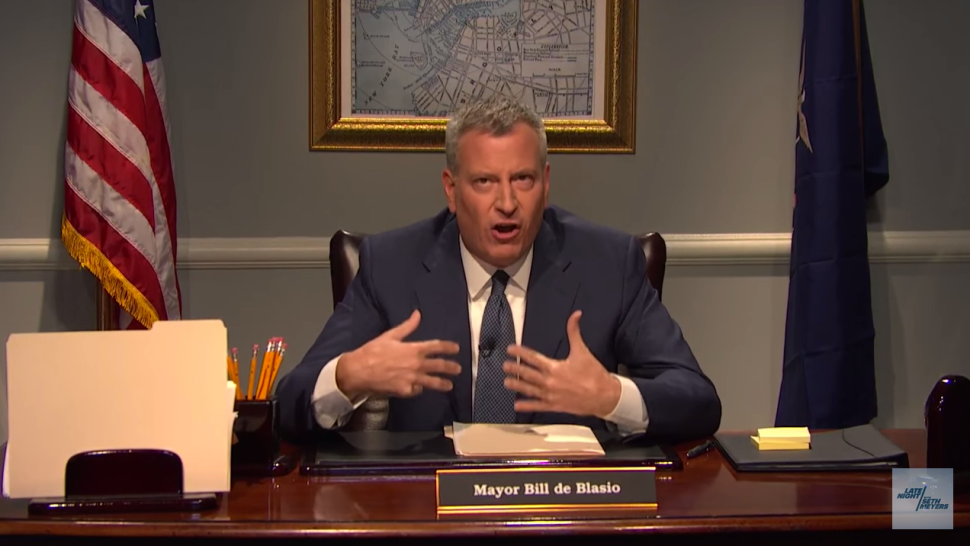