Lamenting low turnout and registration rates in last year’s elections, the Democrats appeared on the steps of City Hall with various advocacy groups to push their “Voter Empowerment Act.” The measure would coordinate the state Board of Elections with the Department of Motor Vehicles, Department of Education, Department of Labor, Department of Military and Naval Affairs and the public university systems to identify New York residents qualified to cast ballots and then place them in the voting books.

“This would just involve government agencies themselves communicating amongst themselves information that they already have, to make sure that people who are eligible to vote can show up on election day and vote without having to worry about deadlines or any other arbitrary rules and to be part of the process,” Mr. Gianaris said, noting that in 1974 5.5 million people voted, in contrast with 3.7 million in 2014—a decline he blamed on the onerous paperwork involved in registering to vote.

Mr. Kavanagh argued the bill would bring the state into compliance with the National Voter Registration Act of 1993, a controversial measure obligating states to offer people applying for drivers licenses or signing up for public assistance the opportunity to also register to vote in federal elections. The Clinton-era measure has not been fully implemented in all parts of the country.

“We know that in New York State and other states, they failed to do that effectively, because it’s a very cumbersome paper-driven process,” the assemblyman said, arguing that bureaucratic bumbling frequently disenfranchises those who fill out that paperwork in the last weeks before an election. “We know in many cases people attempt to register, and their name and address fail to show up properly on the voter rolls.”

Eligible residents who do not wish to vote would be permitted to opt-out of the program.The bill would also abolish New York’s unique one-year delay for people seeking to change their party affiliation.

On Voter Registration Day yesterday, the Campaign Finance Board held drives across the city to get people to both sign up to vote and to add their names to petitions in favor of the legislation. The board’s executive director, Amy Loprest, pointed out that New York ranked 46th in the nation in voter participation last year—which she blamed on outdated and incomplete registration methods.

“Considering all the technological changes that have happened in the past 50 years, why are we still registering voters with pens and paper?” she asked. “Our city, our state works beter when everyone participates. Voter turnout in New York has reached historic lows. If we want to make sure people turnout on election day, we need to make sure all of them are registered.”

Mr. Gianaris argued the proposal has a strong chance of passing even in his Republican-dominated body, given that similar measures have become law in states like New Jersey and Oregon, and that Democratic front-runner Hillary Clinton has made universal voting a plank in her campaign platform.

“We’re seeing a lot of momentum behind this,” he said. 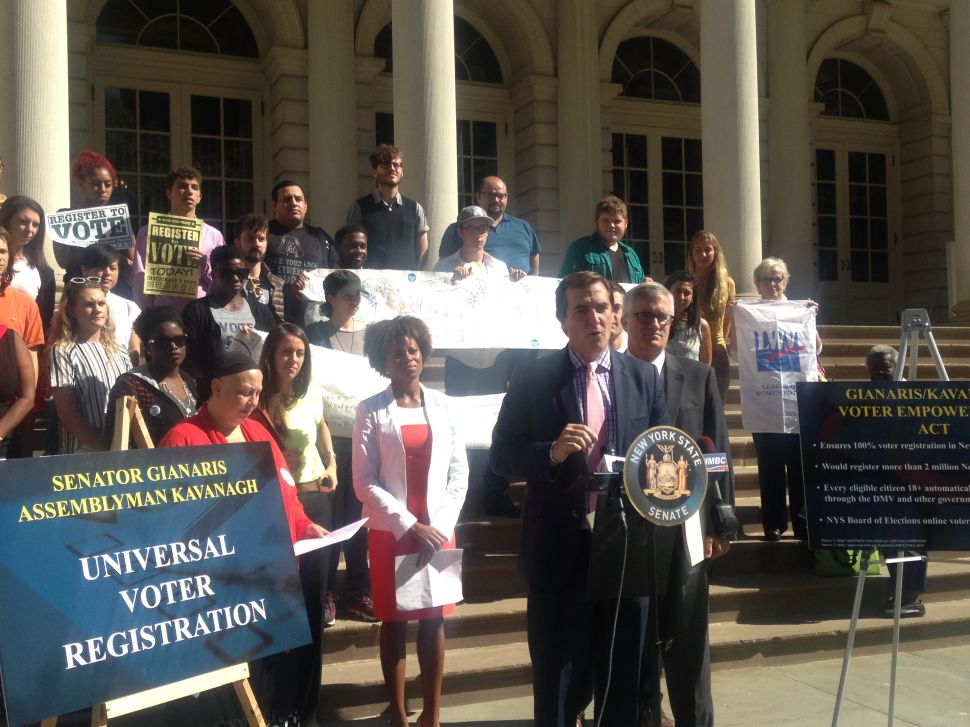