One thing I truly love about Doctor Who—but that can be a bit off-putting, I think, to new viewers—is just how haphazard it can sometimes seem. Of course some episodes, like last season’s finale, are tightly plotted wonders that spring together like magic boxes and bring you to tears with the shock of recognition, the suddenness of a truth you knew all along.

But many, like this season’s premiere, are much weirder than that, with a charming everything-and-the-kitchen-sink quality, an “OK I didn’t see this coming, but I guess it’s what’s happening now” feeling that is in some ways the hallmark of the show.

This is sometimes mistaken for kitsch by critics—and Doctor Who is often kitschy—but this is a thematic rather than a stylistic aspect of the show. Its titular figure is, after all, a time traveler whose adventures are naturally discontinuous from one another. When one romp is over, he and his companions move on to another one, likely very distant from the first in both time and space. And the Doctor very often doesn’t know where he will go next, or why he goes there; there is a randomness to his exploits that works deliberately against the narrative smoothness we expect from fiction.

And so, in “The Magician’s Apprentice,” we get a whole lot of fun set pieces that seem to have started out as independent fun ideas or even just images, and were then strung together to make a (somewhat) legible plot: Hands with eyes in their palms thrust out of the ground, looking for prey to drag underneath. A sinister man made entirely of snakes. Airplanes frozen suddenly in the sky. Two women stepping out of an airlock and walking out casually into empty outer space. And, of course, the Doctor, perched on a military tank, shredding on a guitar for an audience of cheering medieval English peasants.

The episode, in other words, is fun and strange in the classic mode of Doctor Who. But this first half of a two-parter does therefore leave us with a lot of loose ends and questions that the second half will have to answer. Primary among these is: Why does the Doctor spend this whole episode so certain he’s about to die?

I mean, the Doctor is always about to die, right? There’s always some prophecy or vision or visitor from the future telling us when and where it is going to happen. During the tenure of Eleven alone, we saw him die in Utah to fulfill one prediction, and then we visited his grave at Trenzalore to chase down another. And yet here he still is, surviving to journey on. Somehow this time, however, when he gets the premonition that this is the end, he takes it very seriously.

We know it is serious because a) he throws himself a gigantic three-week going-away party involving that tank and that guitar, a more casual look (T-shirt, blazer, sunglasses), and willy-nilly creating a whole bunch of dumb anachronisms in medieval England and b) he composes his Gallifreyan last will and testament (a “confession dial”), which Time Lords traditionally give to their best friend the day before they die.

We don’t get to see what is contained in that will—the Doctor (spoiler! but not really) isn’t really going to die. But if what is written there isn’t a major plot point later on in the season, I’ll eat my fez. The thing may as well have “Chekov’s gun” written on it in block letters. (Hey, for all I know it does; I don’t read Gallifreyan.)

Anyway, the Doctor pretty idiotically sends his will to his psychopathic Time Lady “best friend” rather than his real best friend. Missy can’t find him, though—nobody can; he’s in hiding. So instead she decides to get his attention the best way anyone can: by fucking with Earth.

She stops all of the world’s planes in midair, which doesn’t actually get him to notice, but it does throw the planet into a panic, including UNIT and Kate Lethbridge-Stewart, who calls on Clara. Not simply because she’s the one who has his phone number (UNIT’s got it too; he’s just not answering), but because she has by now proven herself time and again to be a formidable thinker and tactician in her own right.

She shows her talents yet again by correctly surmising that this is not an attack but a play for attention. Missy shows herself and shows the will, and Clara goes two for two by suggesting they’ll find the doomed Doctor where/whenever he shows up in history not to save anyone, but just to party down.

So they crash the medieval times festival, but then the aforementioned creepy snake guy shows up to break up the celebration. His/their name is Colony Sarff, and he/they work for Davros, the creator of the Daleks. He/they have been searching for the Doctor all over time and space to deliver a message: “Davros knows. Davros remembers.” Seems Davros is finally about to kick the bucket. He wants his nemesis to attend him in his final hour, and thinks this message will get the Doctor to come— even though this is obviously a trap.

But what does Davros know/remember? That the Doctor met him when he was just a little boy trapped in the middle of a thousand-year war. That he wanted to help him, tried to save him, until he heard his name and realized that this little boy would grow up to create the most devastating race in the universe, the beings who killed the Doctor’s whole world. And instead of saving him, he just up and ran away. The Doctor isn’t the kind of man to kill Hitler, he has repeatedly told us, but apparently he’s not really so into saving his life, either.

Anyway, apparently riddled with guilt over this, the Doctor agrees to walk headfirst into a nigh-inescapable trap, which is, I guess, why he knows he’s about to die. (Honestly, that still doesn’t make a whole lot of sense: He walks into traps all the time, and he seems to have been in hiding ever since encountering young Davros, way before he knew any trap existed. But let’s just roll with it.)

So he lets Colony Sarff take him to Davros, Missy and Clara tag along against his wishes. It turns out the tiny space station Davros is dying on is actually just a building on Skaro, the conveniently now-invisible Dalek homeworld. So in the end, the Doctor had a pretty good reason to believe he’d be dying today, as he winds up in the belly of the beast. The Daleks destroy the TARDIS and vaporize (maybe) Clara and Missy. And in his grief, the Doctor decides maybe it would have been OK to kill Hitler after all.

While we contemplate that cliffhanger, I’ve got another riddle: Who, in the episode’s title, is the Magician’s apprentice? The Magician is the Doctor; that’s been well established as Twelve’s nickname/costume/alter ego. So then Clara is the obvious answer. But she’s no more an apprentice in this episode than in any other, so why single her out for such a title here?

The more interesting choice is Davros, who we now know first encountered the Doctor when he was just a boy. And what did he learn from the Doctor? Maybe that there are limits to compassion. After the Doctor ran away and didn’t help him, he went on to create a race without feelings, and they conquered the universe. And his dying wish seems to be that the Doctor admit to him that it was his own compassion that was his downfall. The very last scene in the episode, with the Doctor returning to point a gun at that child, seems to confirm this feeling.

On the other hand, remember that the story of the Magician’s apprentice is a story about a child who tries to use the master’s magic but loses total control of it. Little-boy Davros didn’t just see a man who ran away; he saw a man who gave him the tools to survive—his sonic screwdriver, but also the faith that he could get through this danger, if he believed that he could. Survive he did. And then he went on to use this will to survive to create the Daleks. To alter beyond all recognition the tools the Doctor gave him, in order to found the ultimate race of survivors. Who are also, perforce, the ultimate killers.

Now it’s time for the magician to return, to set it all right, to make the waves abate and turn the Daleks back into that single, inert broom. It’s gonna be a long week waiting to see how he manages it. 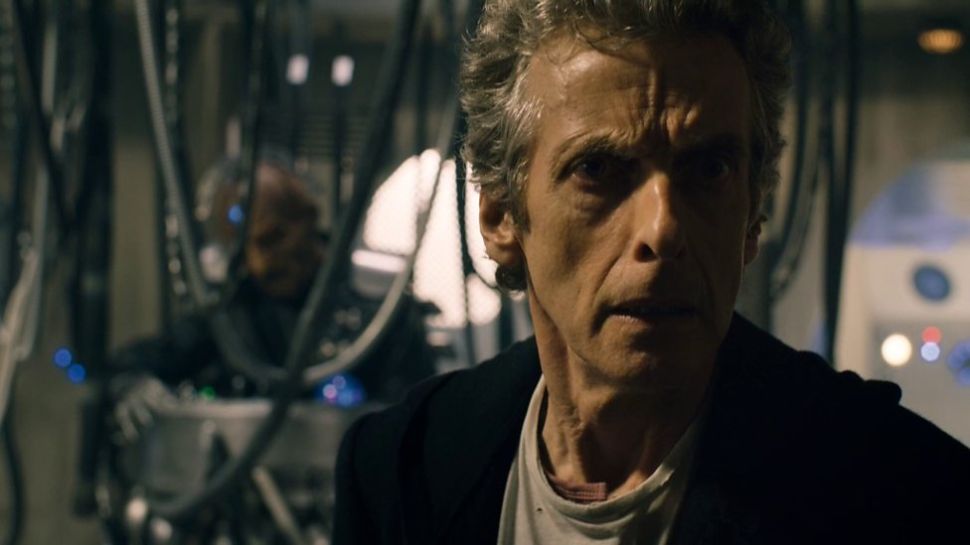