You know who could probably execute the figure eights of the Aerial Sports League’s race course at World Maker Faire this past weekend? A computer. But where would the fun be in that?

Inside a huge net set up outside the New York Hall of Science, pilots raced their drones through a complex course that required traveling through a huge figure eight that used additional structural elements to make it more complicated for the quadcopters. For example, pilots were required to pass through an opening in a tower made up of four columns during different passes. Meanwhile, a live race caster narrated the proceedings for the crowd, in much the same way one might for a Major League Baseball game.

The Aerial Sports League called it the most technical drone racing course ever produced on their website. See a mockup of the course here. The course was 200′ by 50′ by 25′.

The racing was mostly informal and friendly, a way of demonstrating for visitors to the event what recreational drone use looks like. That said, the Aerial Sports League envisions a world in which racing drones becomes something like NASCAR one day, as the Observer previously reported.

Ajakorn Tangtrakul told the Observer that he’s new to the hobby. “Last Christmas I bought a little $20 quad from Amazon and pretty much got addicted.” The software developer said he’s been racing about once a month, since then. He came out with a team called S3 Racing. One of the challenges of this kind of competition is that each course has its own unique course line, he said. The complexity of the one at Maker Faire appeared to be giving pilots a lot of trouble. We saw several heats where none of the drones made it to the end of the race.

The big net, Mr. Tangtrakul explained, also made it harder. They had to keep their flying much tighter than they normally do. 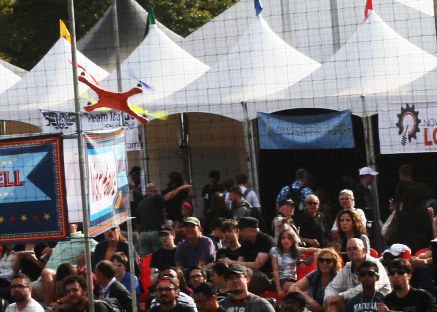