Drunk History, which features inebriated narrators recounting historical events that are reenacted by actors, began as a five-minute Funny or Die web sketch but has since moved to Comedy Central and become one of the five comedies to score an Outstanding Variety Sketch Series Emmy nomination.

Creator Derek Waters not only oversees the show, but he graciously acts as part drinking buddy, part hand-holder to the narrators, a role that apparently isn’t as easy as one might think.

“Well, it’s a fine line because I have a job to do in getting the story so that we can use it, but I don’t want anyone to get hurt or anything so I have to kind of ‘handle them’ a bit,” explains Waters.

Sometimes the narrator does imbibe a bit too much and there is some falling down and vomiting that happens. For this, Waters is quick with a bucket and also with hair holding or a back rub if needed. “Vomiting people are just so vulnerable that you just want to help them, right? Luckily it doesn’t happen as often as you think.”

Alcohol mishaps aside, Waters admits that it’s a bit challenging to work with the narrator, saying, “It’s four to six hours of listening to the same person tell you the same story over and over while they’re drinking and trying to make it interesting.”

He then explains a little of the methodology with, “I don’t want to get them so drunk that they’re trying too hard to be funny, I want them to be in a place where they’re not really trying to be funny at all, they’re just trying to get the story out. When someone is talking about something that they really want you to know you can’t stop listening and that’s what we try to get to. Then it’s taking that six hours of footage and finding the golden six minutes that really tells the story.”

The aftermath of those marathon sessions is that Waters often hears from the narrator the next day…offering an apology. “It’s really strange, but even though we’ve asked them to do this—to drink like this—there’s something about alcohol that makes people feel guilty and bad for some reason. I get these calls and emails and they say, ‘sorry I didn’t do a very good job,’ and I have to tell them, ‘no, you did great, really.’ ”

The members included in the guest cast result from a combination of some stars wanting to appear in the series and Waters and his team reaching out to others. “I’ve been working in the comedy world for a while now and I’m really fortunate to have a lot of good friends who are talented and who want to do this. Then there are people like Octavia Spencer, who I don’t know at all but I wish was my friend. I just reached out to her to see if she wanted to play Harriet Tubman and she likes the show so she said yes, but in all honesty, I didn’t see that coming.”

Although Waters is thankful for his entire cast, he does have some dream participants in mind. “Well, I’d love to have Eddie Vetter on the show because I’m a huge Pearl Jam fan and a big fan of just him as well. I’d also love to have Dustin Hoffman or Al Pacino on. Having those guys would just be off the charts cool for me personally.”

Asked if he might expand the series by maybe producing shows like Drunk Math or Drunk Science, Waters responds, “I’m not opposed to it, but with history this all works because of the storytelling nature of it. With math, you’re just going to see numbers, and math is hard enough when you’re sober, right? With science maybe we could do it, but the stories have to be good. I’m not opposed to anything if the stories are good.”

Those stories are clearly the most important element to Waters as he expresses, “I really believe the only way that the show can stay fresh every season is that the stories have to remain the heart, not the drunk person telling the story. That’s the only way this show will continue to feel new. I never want it to get old. That’s my goal every season. When we talk about a story I always ask, ‘is this a strong enough story?’ If it is, we go with it. If not, then it’s out.”

The complete truthfulness of the stories matters to Waters, as well, as he says, “A lot of people say, ‘oh that can’t be accurate,’ but if you look up any of the stories, besides the dialogue, they’re all absolutely true. It doesn’t make me mad when someone thinks it’s fake but if you look it up on Google or Bing you’ll see that we’re really telling what actually happened.”

Asked what he’ll say if he wins an Emmy, Waters stumbles a bit, confessing, “I don’t really know. Really, I don’t. I can’t think about that happening because it’s all a little surreal for me. I’m sure if it does happen I’ll come up with something but just getting nominated is so cool.”

While many might want to write off Drunk History as just a silly show, Waters says, “Sure, it’s true, drunk people are funny and fun to watch, but I want to say, as humbly as I can, that our show has a specific voice and using that I hope to make you laugh and learn at the same time and not make you think this is all about learning. It’s a lot easier to learn when you don’t know you’re learning. Without sounding preachy, history is really important because the only way we can improve our future is to not repeat mistakes or be inspired by something that’s happened in the past to make change or create something new. That makes me sound like I’m trying to change the world and really all I’m trying to do is make a funny show. So tune in and laugh and if that ‘changing the world’ stuff happens, then so be it.” 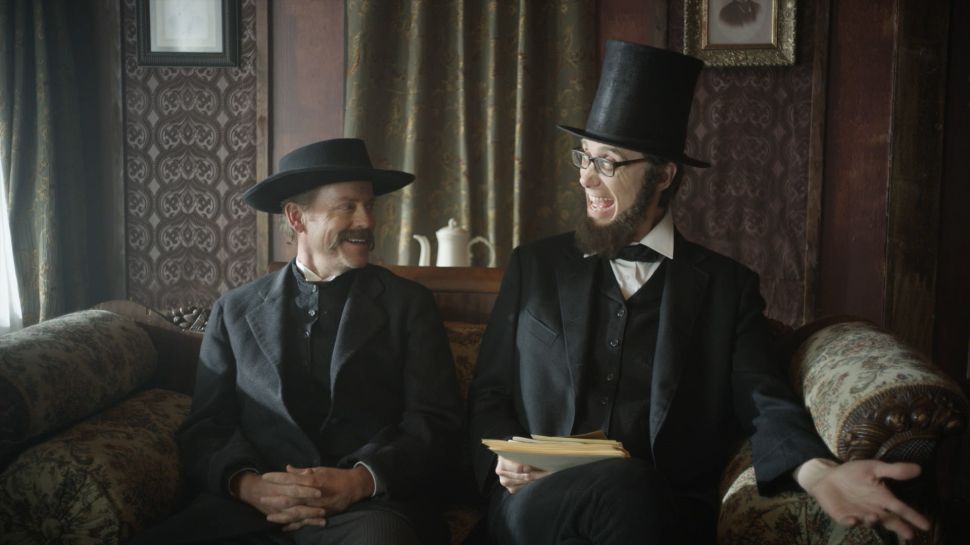