“The most important thing is I’m expecting not to work,” Nicola Farinetti told the Observer with a wink when asked what he planned to do at Eataly New York’s fifth birthday extravaganza the other night. Eataly’s CEO (and son of its founder Oscar Farinetti) recalled the effort of celebrations past. This year, he and the American partners—Mario Batali, Lidia and Joe Bastianich, Adam and Alex Saper—asked themselves: “What can we do nice that’s not going to be work?” The answer: invite five outside chefs; give them each one course and one restaurant to take over for the night.

“The common denominator,” Lidia Bastianich, the PBS host who served as a one-woman receiving line, said, “is good food.”

Spotting Ms. Bastianich, the ultimate Italian nonna in a white dress emblazoned with big red roses, at the entrance, the 48 guests in the third of five seatings became giddy. Franciacorta, a sparkler from Lombardy, flowed as did the assaggi (little morsels) by Fitz Tallon, Eataly’s executive chef (one of many staffers who did indeed work the party).

But there was no time to linger. This was a “dine-around.”

Dan Barber’s raw carrot-fennel-apple-pistachio “dumpster dive salad” with a dollop of whipped chickpea- was devoted 100 percent to waste ingredients, he said, pausing, then repeating “waste” for emphasis. “Every single thing on your plate would have been thrown away had it not been for our chefs to develop a salad that celebrates waste.”

Suddenly it was time for the night’s biggest thrill. Brazilian chef Alex Atala of São Paulo’s celebrated D.O.M. stirred a pot while a brothy amuse is passed. It contained jambu, an Amazonian herb that immediately tingles, numbs, changes the palate.

Each of the visiting chefs brought their own ingredients. Chef Barber’s came from a vegetable processor in the Bronx; imperfections dissuade other buyers and would have landed this perfectly edible food in a dumpster.

Minutes later, we’re already re-seated at the night’s second table. And the ice has broken.

From “what happens if you don’t use canned chickpeas?” to “did you kill Joan Rivers?” the strangers—Italian, Indian, Romanian, Long Islandian—adapted to the shared space and quickly bonded over shared experience: someone was hungry after WD-50. Everyone agreed. Someone was disappointed one out of two times at Eleven Madison Park, inspiring commiseration about consistency. Someone wanted bread to lap up the squid ink sauce in Chef Raij’s Basque gnudi, a gnocchi variation. Everyone agreed. But again it was time to move, a gimmick that slowly lost its appeal.

“I’ll go over, get everything to go, and come back,” joked Anthony Volpe, an artist specializing in charcoal drawing, who illustrated Ms. Bastianich’s upcoming cookbook.

Suddenly it was time for the night’s biggest thrill. Brazilian chef Alex Atala of São Paulo’s celebrated D.O.M. stirred a pot while a brothy amuse is passed. It contained jambu, an Amazonian herb that immediately tingles, numbs, changes the palate. None of us had been to D.O.M. None of us attended this July’s Grand Gelinaz! Shuffle dinner—where restaurants covertly swap famous chefs for one night—at Blanca. None of us listed obscure rainforest plant when asked about allergies. This was exciting.

“The social aspect of these events is rewarding,” said Dr. Afonso. “Where else do you meet people outside your work circle who have so much in common, who are culturally stimulating and adventurous? It’s not just watching Anthony Bourdain. It’s experiencing it yourself and having a good time.”

Nick Morgenstern’s ice cream quenelles were upon us: parmigiana, plum, kalamansi (Filipino citrus), apple cider. Unfortunately, he was in a car accident (all O.K.) so he could not attend. A glass of Moscato cured that moment of sobriety.

And then, three hours to the starting minute, we were on Eataly’s rooftop, open to the lovely September night. “The common denominator is the people who care about good food,” said Dr. Afonso as we posed for a new-friends iPad photo. 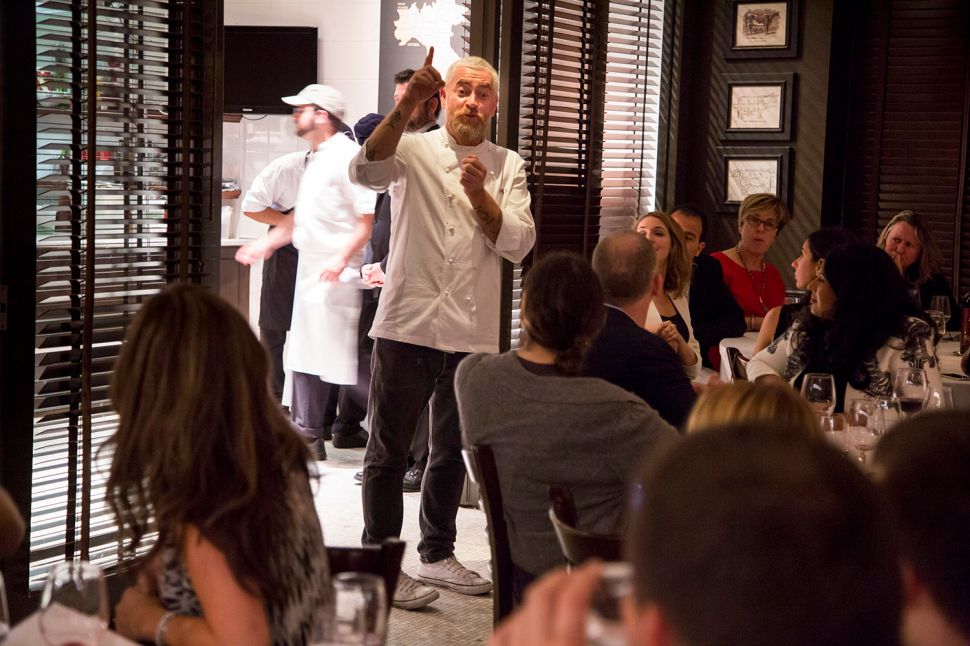