It looks like George Stephanopoulos has a new neighbor.

The president of ESPN, Inc., John Skipper, and his wife Jessica have purchased an apartment at 30 East 72nd Street, the same address that the Good Morning America anchor calls home. Apparently the white-glove Upper East Side building is especially attractive to network television bigwigs.

This past year at ESPN might be seen as a bit more tumultuous than in the past, with three major personalities leaving the network–Keith Olbermann, Bill Simmons and Colin Cowherd. Mr. Skipper, however, who is also the co-chairman of Disney Media Networks, recently extended his contract to remain as president of ESPN (a position he has held since 2012) through 2018. And why not celebrate with the purchase of his new Lenox Hill two-bedroom?

The Skippers paid $2.31 million for the co-op, which they purchased from the estate of Philip C. Abrams. It features views of 72nd Street through all “major rooms,” according to the listing, held by Amanda Brainerd and Simone Mailman of Brown Harris Stevens.

The master suite has a dressing room and en-suite bath, and there’s another bedroom (or possible library) that currently has two twin beds covered in Tiffany-blue linens. The listing also adds that there’s the possibility of restoring a third full bathroom or powder room off of the service hall.

Other highlights include a wood-burning fireplace, as well as pre-war details such as decorative molding, high ceilings and herringbone hardwood floors. Not quite fetching enough to fetch the asking price of $2.495 million, but close. The listing describes the apartment as in “charming estate condition,” which is basically code for cute but in need of a renovation. 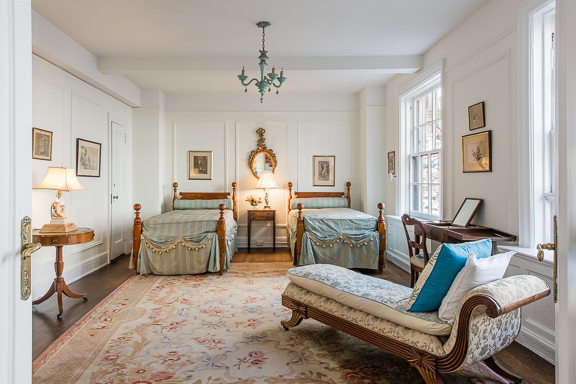