As an unseasonably hot European summer gives way to autumn, the continent is experiencing a mass movement of people not seen since the aftermath of the Second World War. Unlike the end of the war, however, none of the masses currently on the move is European. As hundreds of thousands of people continue to arrive on Europe’s doorsteps and throng her roads and railway lines, many conservative commentators see a more apt, and more ominous, historical parallel in the Völkerwanderung or “wanderings of the peoples” that foreshadowed the fall of the Roman Empire some sixteen centuries ago. Europeans have long historical memories.

While the death match between Haffiz al Assad and ISIS has turned Syria into a Dantesque inferno writ Arabic, most of the attention has unsurprisingly focused on the movements and the plight of Syrian refugees. But as we reflect on the vivid media images of boats and trains overflowing with desperate humanity, it is important to keep in mind two points:

1) The majority of the 350,000-400,000 immigrants who have arrived in Europe so far this year (these are the known numbers; no one knows how many enter undetected) are not Syrians. In fact, less than a third are, with the rest originating in a miscellany of African, Middle Eastern and South Asian countries.

2) The majority seem to be single, healthy-looking young men, which traditionally suggests economic motives for migration, rather than the fear of death or persecution.

What is happening in Europe at the moment is not so much, or at least not predominantly, a refugee crisis but a crisis of European immigration policies.

What is happening in Europe at the moment is not so much, or at least not predominantly, a refugee crisis but a crisis of European immigration policies.

The control over one’s own borders is one of the most important characteristics – and responsibilities – of a modern state. Countries lose control over their destinies and even cease to exist when they lose control over who gets in (and some, like East Germany, when they lose control over who gets out). In the words of the former Australian Prime Minister John Howard, “we will decide who comes to this country and the circumstances in which they come.” This slogan won Howard an election landslide back in 2001 when most Australians agreed that a sovereign country’s immigration policy should not be dictated by the potential migrants themselves or the smugglers paid to get people in.

According to the United Nations High Commissioner for Refugees, there are currently some 60 million forcibly displaced people in the world, of which the UNHCR considers 19.5 million to be refugees. While many of them pine for the day they can safely return to their homes, many, no doubt, would rather have a chance to start their new life somewhere safer and more prosperous.

When one includes those whose motivations are primarily economic, the numbers overwhelm. Some 1.2 billion people around the world survive on less than $1 a day, and 2.8 billion survive on less than $2. Even those not in dire poverty are attracted by the prospect of a better life in a developed country, whether through work or welfare. The prominent role played by people smugglers in facilitating the current wave of migration into Europe suggests that in fact many of the arrivals are far from “the tired, the poor and the hungry” of popular imagination. As the commentator John Schindler tweeted earlier this week, “If the answer to ‘my country is awful/war torn/poor’ is ‘just move right in’ the West better get ready for a couple billion new arrivals.”

It is now clear that all those currently entering Europe, be they economic migrants or political refugees, are shopping for their end destination. Let us assume that all the Syrians trekking into Europe through Turkey and the Balkans are genuine refugees. While not incorporated into the 1951 Geneva Convention Relating to the Status of Refugees, there is a longstanding “first country of asylum” principle of international law that those seeing refuge do so in the closest state where it is safe and possible to do so.

All the Syrian refugees currently in Europe have previously enjoyed the sanctuary of one of Syria’s neighbors. The family of the drowned Kurdish boy, for example, was living in Turkey for the past three years before making the fateful decision to sail to Europe. The Syrian crisis has put an enormous strain on countries like Lebanon, with a population of 4.4 million and hosting 1.1 million Syrian refugees, and the poorer Jordan with its 8 million people hosting 630,000 displaced Syrians. But even the much larger Turkey is struggling with nearly 2 million refugees. If there has been a failure of international community, it has arguably been one of insufficient humanitarian support for Syria’s neighbors.

It’s unlikely, however, that any amount of international assistance would have prevented the current refugee spill-over into Europe. The Syrians who have made the move so far can hardly be blamed for preferring to live their exile in Germany or the UK rather than in an overcrowded refugee camp somewhere in the Middle East. But we should be clear about what this means: the Syrians have already found refuge in Jordan, Lebanon and Turkey (and Iraq to a much lesser extent). What they are looking for now in Europe is not refuge but better life.

And this has dramatic consequences – for Europe, as well as the global refugee protection system. Refugee advocates talk the language of compassion and fairness, but there will be little left of either if the ordered regime administered by the UNHCR for the past few decades breaks down.

Europe is now faced with a self-selecting group of refugees: those who are able and who can afford to journey from the Middle East to Europe. Every refugee place they take in Europe is one less place available to those left behind who are playing by the rules or can’t afford to pay people smugglers. How is it compassionate and fair that three young Syrian men who turn up on the Austrian border will take the places that might have otherwise been available to a widow with two young children in a refugee camp in Jordan? Refugee intake should not be a real-life “Amazing Race.”

Ultimately, Europe and other Western countries can only take a finite number of immigrants if they want to maintain the standard of living that has attracted immigrants in the first place. And the refugee crisis will only be solved at the source, just as in Europe after the Second World War or in post-2001 Afghanistan, where the fall of the Taliban saw the return of nearly 6 million refugees.

This European autumn, one thing is certain: good intentions and moral posturing are abundant and free; compassion – and real solutions – are difficult and expensive. 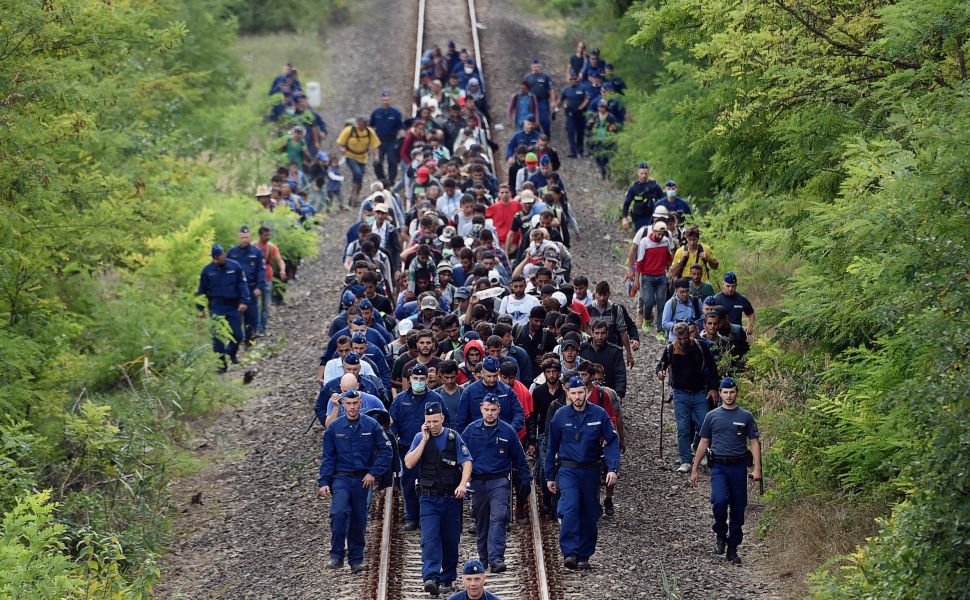