Following a tour of the Neil Armstrong Operations and Checkout building, I sat down with Lockheed Martin’s Orion Operations Manager, Jules Schneider to discuss the current progress and development of the Mars-bound Orion Crew Vehicle.

The most recent major milestone in preparing the Orion spacecraft for deep space occurred on December 5, 2014 with the completion of Exploration Flight Test 1 or EFT-1. This test, launched by a Delta IV Heavy Rocket from Cape Canaveral Air Force Station, saw Orion travel farther than any human spacecraft since the Apollo 17 mission in 1972. Data from the EFT-1 mission has and will continue to be utilized for design adjustments, validating computer models and reducing overall risks and costs associated with the mission.

After Orion completed a two-orbit, four-and-a-half hour mission, NASA, Lockheed Martin, and the U.S. Navy coordinated efforts to recover the spacecraft, secure it in the well deck of the USS Anchorage, and return it to Kennedy Space Center for evaluation.

Of the 87 flight test objectives for the EFT-1 mission, what would you say were the most important?

All 87 were very important but some of the real key events that we needed to get high confidence in demonstrating are things like separation events. Us separating from the launch vehicle. We have fairings that we have to separate. We actually have to separate the crew module from the service module before we re-enter – so that’s a critical event. We have to separate the forward bay cover and get the parachutes out. A lot of separation events were critical but all those objectives are defined by different engineers and if you ask any one engineer there going to tell you their objective was the most important.

NASA Ground Systems Manager Philip Weber called this period in Orion’s development “hump day”. Could you elaborate on what components are being focused on at this point?

I think what he was trying to get across was, while this was a big deal and big event, we have a long way to go before we are ready to send people to Mars. So great job getting EFT-1 done and flown successfully but we’ve got a lot of work ahead of us.

With Ascent Abort Test 2 (AA2) coming in 2018, can you give me a common situation where this system would be deployed?

Well in that environment when you have to deploy that system nothing is common. Its an emergency. Its a crisis. But I can tell you this, the Launch Abort System that we have on Orion is designed to save the crew anytime either on the launch pad or at anytime during ascent. The genesis of that requirement was from the Columbia Accident Investigation Board that was put together and released after the Columbia accident.

One of the things they said was that whenever NASA goes on to develop the next generation of human spacecraft, it had to be an order of magnitude more safe than the Space Shuttle and the way we meet that requirement is through our Launch Abort System. We can save the crew at any time meaning we can extract the capsule either off the pad or anytime during ascent and get it far enough away from the launch vehicle – reorient it, and then deploy the landing system or parachute so that the capsule will land safely.

Will this test use the same Orion Crew Module from the EFT-1 test?

No. That was the original plan but that has changed. I don’t think the new plan is completely flushed out yet. The reason that changed is because when the EFT-1 capsule came back, people were amazed at how good a shape it was in. I’m pretty confident that NASA leadership decided that ‘you know? do we really want to fly his incredible valuable asset on AA2 and then drop it in the ocean and possible lose it.’ I think they decided that may not be the best use for EFT-1.

Will the Module specifications be the same?

No. For that test all we are really proving is the Launch Abort System. So the capsule just needs to be the right shape, the right weight, and have the right center of gravity. Those are the main things. So you can achieve that with a much simpler, less expensive capsule. It doesn’t have to have all the functionality of a real capsule because it’s just there to provide enough to show that the Launch Abort System can perform its job.

A month ago, Critical Design Review began in Houston, has their been any progress on that front?

We’re on schedule. Everything’s on schedule. We had the kickoff meeting a couple of weeks ago in Houston. A lot of the sub-system design reviews are happening as we speak and several are finished. Our teams are participating in those.

After the Constellation program was left out 2011 fiscal year budget and subsequently discontinued, Doug Cook from the Exploration Systems Mission Directorate said that the design of Orion made sense when pushing forward with human missions to deep space. Could you elaborate?

Well because the Exploration Mission requirements for Orion were very similar to what they were on Constellation. Under Constellation, we had deep space, the Moon, and Mars as the requirements and under Orion we had the same thing. The only difference was we don’t have the low-Earth orbit stuff anymore.

Were you on that project?

Yes. I was on the proposal team.

How did you guys feel when the program was cancelled?

The whole cancellation thing was kind of a misnomer. What happened was the President’s budget came out and it zeroed out funding for Constellation but Lockheed Martin was never issued a stop-work order or anything. So we had to keep focused. We were still under contract and we had a job to do. It was hard because that was a pretty big distraction but the team kept focused and kept working towards the missions they had at the time.

In order for Humans to live comfortably during the journey to Mars, they would need a habitat. Is Lockheed Martin involved in that development?

Whether we end up getting the contract for that or not, obviously we’ll have to interface.

What condition caused by the vacuum of space will provide the most challenges for Orion’s crew?

Pick your poison. Space is a tough business. I think that when you start asking spacecraft to go beyond the Moon and spend long durations in that environment, that’s where it really starts to get difficult because you’ve got to bring everything with you right?

Studies are talking about not being able to bring enough to go to Mars and come back so you’re going to have to make there. There’s a lot of that stuff to consider. 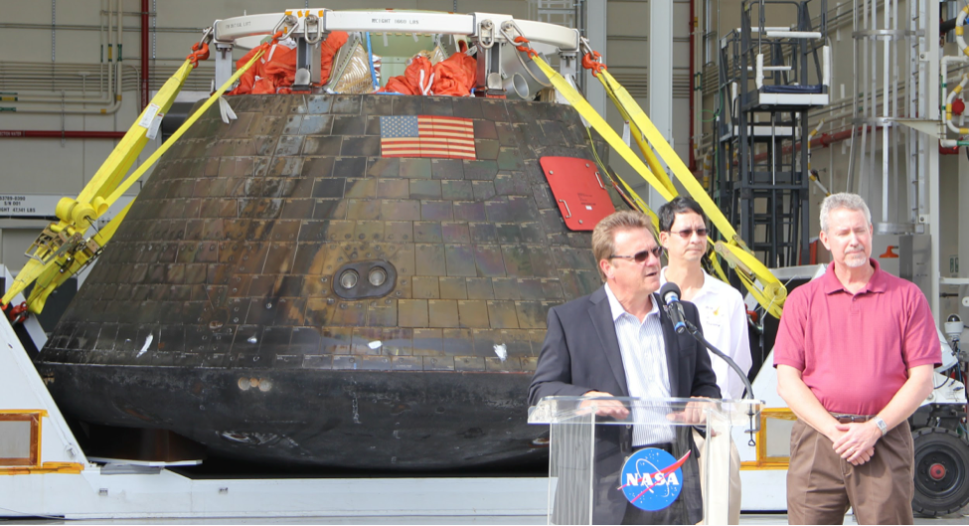