Tilda Swinton doesn’t look like herself on the cover AnOther magazine. And that’s because it’s technically not her.

Present are her signature cheekbones and rigid stare, but she has been made up with kohl-rimmed eyes, a choppy, short coif and, oh, her name isn’t featured anywhere on the front of the glossy. Instead, Marianne Lane, the name of the rockstar that Ms. Swinton portrays in Luca Guadagnino’s latest flick, A Bigger Splash, is there. It seems the actress has had a hard time shedding this punk rock character.

For full clarification, the seventh and final footnote of the story plainly states: “This entire interview is a work of fiction co-authored by Tilda Swinton, Glenn O’Brien, Luca Guadagnino and Dave Kajganich, based around events in the film A Bigger Splash.”

The film, which also stars Ralph Fiennes, Dakota Johnson and Matthias Schoenaerts, is both a remake and an update of Jacque Deray’s La Piscine. The plot follows Ms. Lane, a rock star who is recovering from vocal surgery on the island of Pantelleria with her boyfriend Paul (Mr. Schoenaerts). The idyllic trip is interrupted by a visit from Ms. Lane’s former love Harry (Mr. Fiennes) and his daughter Penelope (Ms. Johnson). So what’s the exciting twist? The lead actress barely speaks throughout the entire movie, save for a few whispers here and there.

Ms. Swinton, who was promoting A Bigger Splash at the Venice Film Festival this week, only agreed to doing the film if she didn’t have to talk. “It was a moment in my life when I really didn’t want to say anything,” she told reporters on September 6, according to the AP.

Which might explain why the actress is hiding behind her character for this cover feature. Through the interview–which Mr. O’Brien notes was conducted via email in his earnest introduction–Ms. Lane talks about her parents, her struggle with addiction and her previous life as a reporter. She even dodges a question about her former lover Harry with a classic “no comment” remark.

While the responses are clearly well-crafted and thought out, the interview is still an interesting read. And perhaps that’s because it’s so well written. “Yeah. It was a precipice… But somehow one I could throw myself off without a second thought,” Ms. Lane said regarding the decision to get throat surgery. “It was like a Russian roulette but with only one chamber: the lack of choice was a peculiarly calming influence. I even wondered if I would ever be able to speak again, let alone sing. That’s a thought that concentrates the mind pretty comprehensively, let me tell you. But I went into it – once I had decided to go ahead with the procedure – with a measure of excitement, like chucking myself down a waterfall.”

If any modern day punk rocker answered interview questions like this, the journalists asking them questions would certainly feel a sense of intimidation. Or at least question their own writing abilities.

Accompanying the interview are images of Ms. Swinton as Ms. Lane, shot on tour and bedecked in a mix of Dior and vintage clothes. There she is, smoking a cigarette indoors, behind the guise of sunglasses, in another shot she’s clutching a microphone, captured mid-note by photographer Glen Luchford and styled by Katie Shillingford.

The brilliance of AnOther‘s cover could be seen in both a positive and a negative light. While this is a refreshing departure from the usual celebrity interview, where the questions are expected and the answers are pre-manufactured by a publicist, it does offer up some hefty free publicity for A Bigger Splash. But seeing as this is a continuation of the nearly poetic collaboration between Mr. Guadagnino and Ms. Swinton, which first came to light in the film I Am Love, that is not a particularly bad thing at all.

The fact that we all must wait until A Bigger Splash debuts in U.S. on May 13, 2016 is in fact terrible. But until then, a read through Ms. Lane’s AnOther story should help. Additionally, Dakota Johnson covers the Fall/Winter issue, which will be hitting newsstands today. 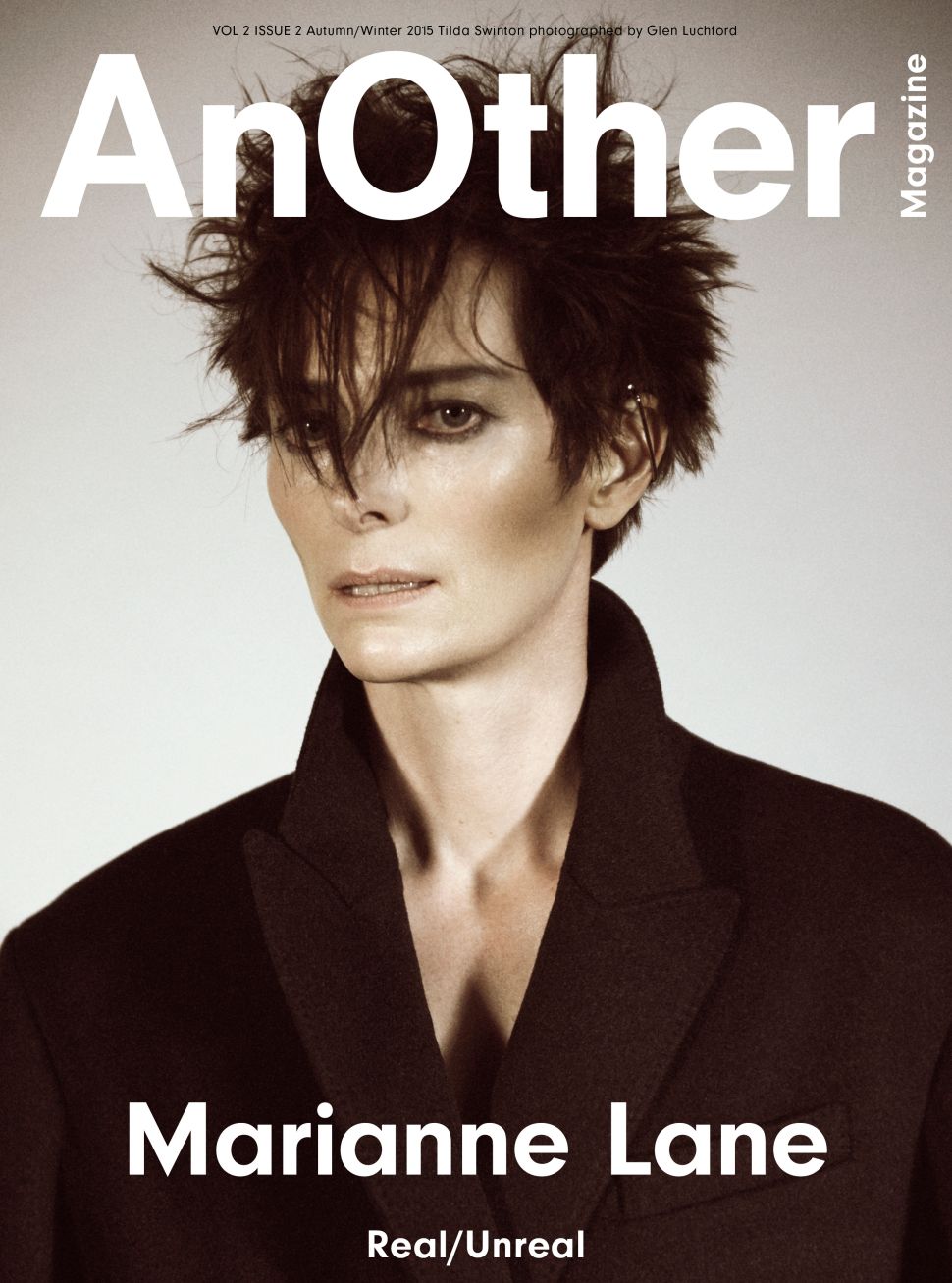