Comedians often hide a tremendous sadness behind their on-stage personas. Beyond the observational humor that probes at life’s foibles, uncovering universal truths for everyone to laugh at, many comedians are in reality tortured philosophers.

EZTV’s debut Calling Out is a mature and thoughtful breakup album, masquerading as a seasonal collection of summer jams.

In music, power pop might be comedy’s analog. Evolved from the music of British Invasion groups circa the mid-’60s, power pop is all shimmering guitar and tight drum hits that are right on rhythm, the fills and transitions precise and locked in. Ditto the harmonies, which come in abundance but never feel too vast or widescreen. Despite the richness of the arrangements, good power pop still sounds like the work of a band in a room. Hence the power.

Yet it’s in such a seemingly sunny shell that power pop pulls a fast one on listeners. In the work of bands like the dB’s and Big Star, sugary sounds cover up a tremendous sense of lyrical and thematic heaviness, perhaps most evident on Chris Bell’s transcendent 1971 solo album, I Am The Cosmos. Bell was a founding member of Big Star, greatly contributing to their seminal debut, #1 Record, before his increasing drug use and fighting with the band led to his departure.

In Cosmos, Bell’s tremendous sadness pairs strangely with power pop’s exuberance, giving the songs a tremendous sense of irony and heft that resonates today. This is evident in songs like “There Was a Light,” which seem catchier than they ought to be, given what Bell is singing about. Though a pair of tracks were released as a single in 1978, the record was almost never heard. Instead, Bell’s depression got the better of him and he took his own life in 1978. The full genius of I Am the Cosmos wouldn’t be heard until it’s official release in 1992.

Pardon the lengthy history lesson, but the legacy of Chris Bell seems worth mentioning when considering New York’s EZTV, only because the group instills a similar sense of depth back into a genre somewhat lost to time, a genre that has so much to say if you search beneath its surface.

Fronted by guitarist, singer and principal songwriter Ezra Tenenbaum, 27, EZTV’s debut Calling Out is a mature and thoughtful breakup album, masquerading as a seasonal collection of summer jams. Power pop is the closest reference point, but gone is much of the rigid, studio sheen that characterized the genre’s peak in the late ’70s and early ’80s. With drummer Michael Stasiak, 26, and bassist Shane O’Connell, 29, Mr. Tenenbaum brought these good friends on board to form what feels like a true band, a collaborative effort. In a city like New York, where so many acts are nepotism-funded vanity projects of bored rich kids with no patience for craft, this is what makes EZTV so refreshing—they are old souls who let the songwriting do the talking.

The Observer caught up with the band before their set at Bowery Ballroom last weekend, which was short but oh-so-sweet. Tunes like “Dust in the Sky,” “Hard to Believe” and “Pretty Torn Up” boldly bring power pop to the short attention spans of a millennial audience. With such tight, punchy tunes, EZTV has the ability to bring about the genre’s renaissance if they so desire.

Elsewhere, the buoyant infectiousness of “Trampoline” and the minor-chord earnestness of “The Light” showed a band taking a type of music they know well to personal places. Mr. Tenenbaum was much less shy on stage than in conversation—the fact that the band genuinely cares about these songs is visible on all their faces, as is the fact that they’re having fun, and neither of those things is necessarily guaranteed from today’s glut of cynical New York bands. Watching EZTV as they’re just getting sea legs for the touring machine was breathtaking too; the magical purity of these songs is still fresh to them, still close-to-home, and still profoundly cathartic. Our conversation only corroborated the energy EZTV exuded throughout their earnestly felt set.

This music all sounds so personal, but also aware of a sound. Was it a collaborative effort?

Michael: Ezra started this project by just turning off a lot of the heady aspects of making music, [instead of] pumping out demos and demos. I was his roommate for many years and was always hearing the stuff coming through the door, and it just started feeling more and more direct and honest. Once he had this huge set of demos, we got together and started playing stuff as a band, and in the way we dressed up the songs we were almost not thinking about the content of it. That’s where the influences came in—oh, I guess this riff could kind of sound like a Flamin’ Groovies riff. So we just thought, “Let’s go that direction,” you know what I mean? And then the end product of course has that lyrical sensibility with the stuff we were into at the time.

What happens when people tell you how “summery” your music sounds, or how it sounds like this and this and this, but the songs have more staying power and have more mileage than people expect?

Michael: [Our music is] something that seems like it should be disposable, as pop songs are at two and a half or three minutes, and there’s a lot of stuff like that. But then with songs like “Please Please Me” there’s a candy coating, and if you keep on listening to the words it’s agonizing. The lyrical songwriting is so strong that it buoys the more fun elements, the drum fills and guitar riffs that make pop music.

‘With songs like “Please Please Me” there’s a candy coating, and if you keep on listening to the words it’s agonizing.’

They’re you’re lyrics though, Ezra. There seems like some cathartic stuff you’re working out on this record. Has playing these for people been allowing them to take on any new meaning for you? What’s in it for you by mixing the heavy-handed lyrics with the lightness of pop?

Ezra: It’s just a way to actually put it out in the world. I spent a while just trying to make music and not really finishing anything. This was when I started giving myself permission to make something easy, and this is just how it comes out. There’s less intention.

Michael: I’m really glad that people—not just reviewers or people whose job it is to listen to the record—are picking up on the melancholy underneath the songs. I just like that people are digging that deep into it, taking it for more than a few spins. It seems like this is a record that people are listening to during their workday or their commute. That’s been very heartening, and it’s changed how we play it a little bit.

So you make these songs that have an emotional undercurrent, but they themselves are very light. Do you write during this promotional time or just go through the motions?

Ezra: I write in spurts. I hadn’t been and just the past month or so I’ve been getting back into it. It’s something where I have to be in the mode where I write a couple of songs a week, or spending a lot of time. If I can’t do that I feel like I don’t even bother.

You guys seemed focused on the craft first and foremost. Why is that so rare these days? You guys are a band, I mean, it’s not Ezra and the EZTVS…

Shane: There’s very few bands in New York these days just because of how difficult it is for people to work on music together. Both Michael and I are also instrumentalists who have joined other “bands,” but they’re really just a person or two people who make a record together, you know what I mean? I think that’s probably also what makes touring in this band more fun, too. Since we made this music together, there’s a different objective onstage—to find that feeling together again, and have an experience. If it was Ezra and hired guns, for Ezra it might be a lonely experience or not have that same gut punch.

To what he’s saying, Ezra… you write these songs that are deeply personal and travel them around. You write this thing, you work it out, is that a therapeutic process?

Ezra: It’s definitely therapeutic, although we haven’t toured all that much. We toured a bit this summer, and we’re hoping to do more of it. I wouldn’t be that comfortable with anybody else but them.

What about shitting where you eat? Is that any struggle for you guys, being cool with each other after spending so much time together?

EZTV are old souls who let the songwriting do the talking.

Michael: We learn… it’s not difficult. And the thing to always remember, which a lot of people forget, it’s just supposed to be fun. These are your buds. You really admire them, you respect them, and you think they’re very talented, wonderful people. You’re supposed to just hang out for a while and work on what you can do to get Ezra’s cathartic songwriting style, whether a lyric or a riff, just stronger. Shane and me are always just constantly trying to figure out the best way to be in the song, and to hang back and let the other parts shine.

Shane: We’re also on the second or third wave of making music with each other. Michael and I started making music when he was 18, so we went through periods when were young and had bands that fought. Now we’re so used to each other that we know each other’s limits, and the objective is to keep things fun. It’s so much easier to do that now that we’re older and have spent so much time with each other.

Michael: That said, we’re all pushing each other in some way, you know? It’s testy. It’s your talents, your energy and your time you’re devoting.

So much of this music machine in New York is also a lifestyle culture, though. Do you guys have to show up at these parties being thrown after and hang out, make an appearance and stay up late?

Michael: Oh man, you’ve got to invite me to these parties!

You guys are just dudes, it seems.

Michael: You gotta be you. And if the songs are fucking good, they’re good.

Anything else for the readers? Ezra, you still into Aleister Crowley?

Michael: I don’t think he’s into the black magic that much anymore. He used to be.

Ezra: I go into phases. Maybe I’ll get back in. 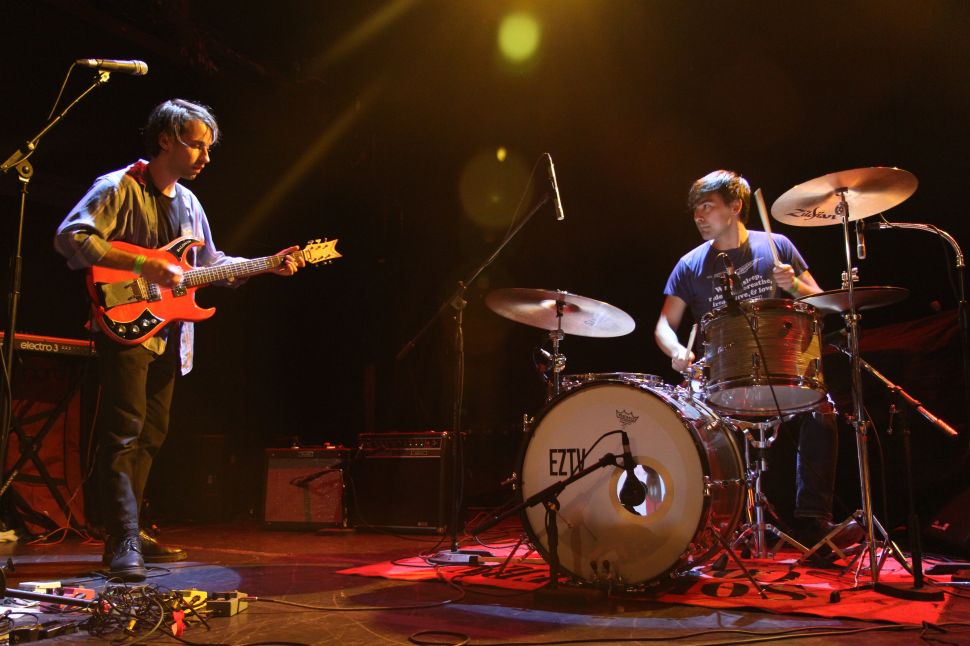