“You know how I feel about guns!” Travis yells at his son Christopher in this week’s Fear the Walking Dead. Christopher, for his part, was in the middle of a lesson on proper shotgun etiquette being taught by Daniel Salazar, whose family is now stuck sheltered with the Clark-Manawa crew. We actually don’t know exactly how Travis feels about guns, having just met him two episodes ago. But using context clues, something every character on Fear the Walking Dead could sorely learn to do, I can see he doesn’t exactly love them.

Daniel Salazar’s response: “A gun doesn’t care how you feel about it.”

Wait! Don’t go anywhere. I’m not setting up for any heavy handed “guns don’t kill people, people kill people” gun rights discussion, because we’re not here, in a Fear the Walking Dead recap, to talk about that. We’re here to talk about zombies. And zombies are exactly what sprang to mind during this exchange. Guns don’t care how you feel about them because, duh, they’re unthinking, mindless vessels. So are the walking re-animated corpses that pepper the Walking Dead universe. Even if it’s your neighbor, your best friend, or a close family member, once a walker goes full zombie it doesn’t care what you think of it. It just wants to eat something, preferably your face. Does this make it okay to forget the past, forget how you feel about who the person was before, and, say, smash the zombie in the head with a ball-peen hammer?

It was this question, for better or worse, that took up the majority of the drama of episode 3, “The Dog.” The Clark’s next-door-neighbor Susan has succumbed to the virus, and lo and behold she’s now stuck in the Clark’s fence because zombies aren’t great at turning right or left. This leads to an episode long dilemma — is that still Susan stuck in the fence?

Every zombie movie worth its weight in brains has that one character stuck in heavy denial over what they’re seeing. Madison is the strangest version of that character I’ve ever seen. On one hand, she’s the person who no matter what will always be like “Oh Susan…Susan are you okay? I don’t think Susan is well, you guys” as Susan growls like a demon and shuffles towards her, blood caked all over her clothing. But on the other, Madison does ask Liza to “deal with” her if she ever becomes like Susan. So she knows something must be done to the infected, but refuses to actually do anything. Basically, “if I ever become like Susan, shoot me in the head. Now, excuse me while I refuse to shoot Susan in the head, because she helped babysit.”

I’m actually really enjoying Fear The Walking Dead‘s aesthetic choice of keeping the major events of the zombie outbreak to the outskirts of the story, because just in terms of the show’s vibe, it’s scarier that way. I love the fact that there is a riot happening around the zombie apocalypse, not because of it. The chaos and looting in the streets has gotten so out of control that when someone starts eating the riot cops, the looters are like “sure, why not!” There’s something chilling about watching a family play Monopoly, unaware that the world is falling down around them (although thank god Fear the Walking Dead isn’t The Walking Dead, or that Monopoly game would have lasted three episodes, minimum.)

This works so well because our main characters don’t understand why this is happening, or the scale of it. But man, they need to start understanding something. The only reason Susan is stuck in the fence is because just the night before she violently attacked Madison’s daughter Eliza. This is basic human threat detection. That is not still your friend Susan. That is clearly not still Susan!

I think that’s why Daniel Salazar himself is such a breath of fresh air, because man is that guy learning the rules of the apocalypse quickly. First of all, if a guy lets you hide in his barber shop during a highly dangerous riot situation, you don’t balk at the thought of that same guy coming to your house for protection. Looking at you, Travis. Secondly, that was a great moment when Daniel shoots a zombie that breaks into the Clark home early in the episode, and the zombie doesn’t go down. Daniel’s just like “huh, maybe the brain,” figuring out the proper way to kill the undead ten times faster than Travis is figuring out that maybe everything isn’t going to be alright. Because Travis saying to his son “We’re going to be alright. We all will be” just doomed roughly half the people in that house.

I also can’t seem to get a grasp on Nick, who is semi-ignoring the mass panic outside his window not because he’s in denial, but because he’d really rather just focus on getting more drugs. Which, yeah, is probably, and sadly, realistic. But Nick (in no small part thanks to Frank Dillane’s portrayal) is our best drawn, most charismatic character, and he’s being wasted on the fact that every step forward in the plot must be dragged back to his addiction. We see what you’re doing, Fear the Walking Dead. Drugs = zombies. The point has been made.

Still, though, the end of episode three was promising. Because it’s not Travis, or Daniel, or Madison who end up putting Susan down. It’s the military, who has finally shown up in force to deal with this whole thing. “That wasn’t his wife anymore,” a soldier says to Madison after he blows Susan’s head off in the arms of her husband. And he’s right, of course. But in the 47 years after Night of the Living Dead premiered, we’ve learned one solid fact about the zombie plague — when humans get involved, especially the military, it never gets better. The cavalry never arrives. The cavalry only makes it worse.

Because a zombie doesn’t care what you think about. But a person — especially a person in full control, and carrying a really, really big gun — a person cares a whole lot. 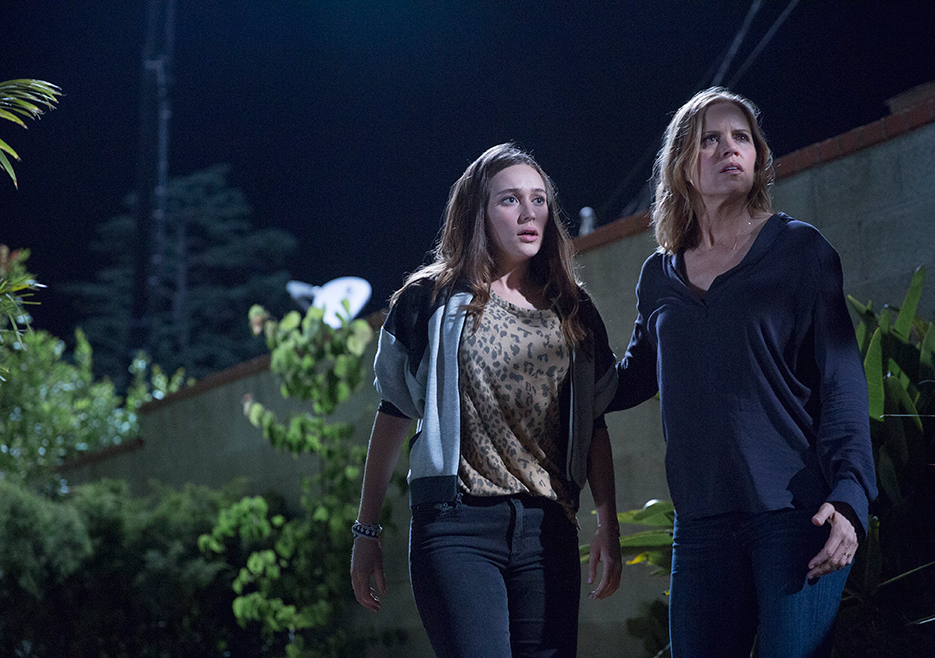